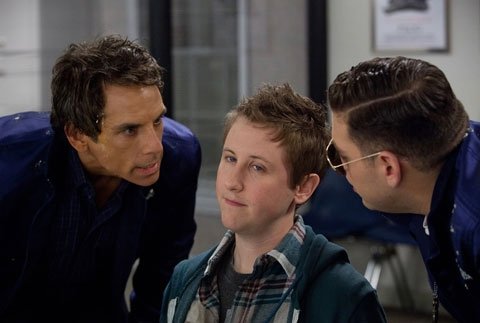 Whatever else one makes of that incident, legally, politically or culturally, its status as a tragedy is undeniable. Thus the abbreviated title of the film is obviously both a necessary marketing stratagem and a gesture in the direction of good taste.

The genre-blending premise that’s squandered is a potentially interesting one: After the night watchman at the Costco store he manages is mysteriously murdered, earnest suburbanite Evan (Ben Stiller) forms a ragtag team of neighborhood guardians to investigate.

Joining Evan on his crime-stopping crusade are happy-go-lucky family man Bob (Vince Vaughn), police department reject Franklin (Jonah Hill) and British-born square peg Jamarcus (Richard Ayoade). But this quartet of bumbling sleuths, and newfound friends, gets more than they bargained for when clues begin to suggest that the culprits behind the killing were other than human.

With that as their starting point, screenwriters Jared Stern, Seth Rogen and Evan Goldberg could have put the same kind of comic twist on extraterrestrials that 1984’s "Ghostbusters" gave to things that go bump in the night. Instead they deliver an endless stream of juvenile sex jokes and moments of brief but gruesome violence.

The foundering proceedings head to Marianas Trench-depth as scenes of group sex and other perverse activities are played for laughs.

The film contains a demeaning view of human sexuality, including the frivolous treatment of aberrant sex acts with gratuitous nudity, fleeting but horrific gore, about a dozen uses of profanity and pervasive rough and crude language. The Catholic News Service classification is O — morally offensive. The Motion Picture Association of America rating is R — restricted. Under 17 requires accompanying parent or adult guardian.