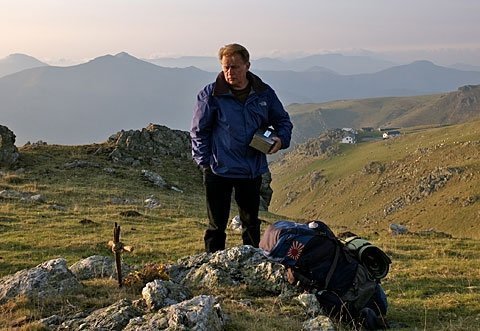 NEW YORK (CNS) — A thinking person’s road movie, "The Way" (Producers Distribution Agency /ARC) follows a quartet of central characters along the ancient pilgrimage route from France to the Spanish shrine of Santiago de Compostela, even as it conducts viewers through a reflective, and ultimately rewarding, exploration of elemental themes.

Writer-director Emilio Estevez’s drama challenges materialistic values and treats faith with refreshing respect. But its focus — like the varied motivations of the contemporary pilgrims it portrays — is more broadly spiritual than specifically religious. Thus Catholicism is treated as something the onscreen travelers encounter rather than fully embrace.

So moviegoers on the lookout for a full-blown conversion story will be disappointed. And parents will want to keep in mind that some aspects of the dialogue and behavior on display, including one character’s fondness for marijuana, make this meditative offering unsuitable for kids.

In an echo of reality, Estevez and his real-life dad, Martin Sheen, play a father and son. The fictional duo’s temperamental differences, however, have left them semi-estranged. Estevez’s Daniel is hungry for experience and fond of globetrotting, while Sheen’s Tom, a prosperous California ophthalmologist and widower, is content to divide his time between his office and the golf course.

It’s out on the links that Tom gets the shocking news that Daniel has been killed in a freak storm while pursuing his latest adventure — hiking the mountainous path to Santiago first blazed by medieval pilgrims. After claiming Daniel’s body and effects, Tom resolves to complete the journey Daniel had only just begun as a means of honoring the lad’s memory.

As he follows the Camino through the lush landscape of the Basque Country, Tom meets, and bonds with, three of his fellow sojourners: Sarah (Deborah Kara Unger), a tart-tongued Canadian divorcee out to quit smoking, Joost (Yorick van Wageningen), a merrily gormandizing Dutchman who hopes to lose weight, and Jack (James Nesbitt) a garrulous Irish author struggling with writer’s block.

Despite some initial resistance, Tom’s newfound friends gradually break down both his self-imposed isolation and the mild orneriness by which he enforces it. A kindly priest, meanwhile, gives Tom, a self-identified lapsed Catholic, a set of rosary beads. A later scene shows Tom acknowledging that the use of them has proved helpful.

The privations they all endure — long days of walking are followed by nights in primitive dormitories — and the simple but pleasant hospitality offered by the locals drive home the point that happiness and meaning are not to be found in the blind pursuit of wealth.

"The Way" most closely approaches an explicit endorsement of faith during a climactic scene at the shrine itself. Catholic viewers will especially appreciate the influence that ancient structure exerts on Jack, whose previous sense of alienation from the church he attributes to the clerical scandals in his homeland.

Less welcome is the recurring sight of Tom leaving portions of Daniel’s ashes at various spots along the trail; Christian reverence for the body of a departed person — and the faithful expectation of that body’s resurrection — require, rather, that cremated remains be buried together.

Still, the underlying message of "The Way" — the very title, of course, recalls Jesus’ teaching that he is himself "the way, the truth and the life" — is one that audiences of faith will find congenial, if not as robustly satisfying as less caution might have made it.

The film contains brief partial rear nudity, drug use, a couple of instances of profanity and of crass language as well as references to abortion and sexuality. The Catholic News Service classification is A-III — adults. The Motion Picture Association of America rating is PG-13 — parents strongly cautioned. Some material may be inappropriate for children under 13.