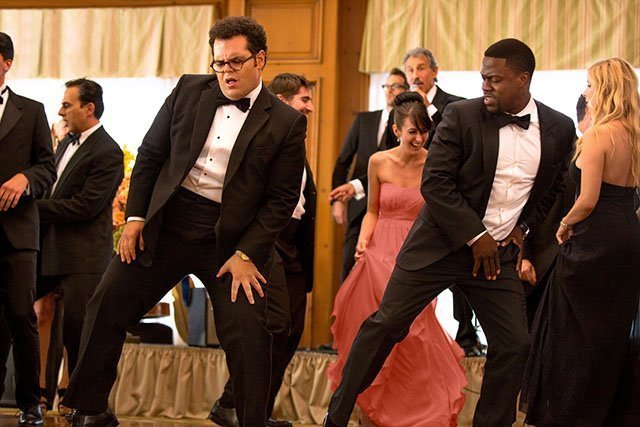 Josh Gad and Kevin Hart star in a scene from the movie "The Wedding Ringer." The Catholic News Service classification is O -- morally offensive. The Motion Picture Association of America rating is R -- restricted. Under 17 requires accompanying parent or adult guardian.

NEW YORK (CNS) — Moviegoers should avoid putting themselves through "The Wedding Ringer" (Screen Gems). Under co-writer Jeremy Garelick’s direction, what could have been a touching comedy bogs down instead in juvenile nastiness.

Likeable nebbish Doug Harris’ (Josh Gad) betrothal to girl-beyond-his dreams — at least where looks are concerned — Gretchen Palmer (Kaley Cuoco-Sweeting) presents the otherwise delighted husband-to-be with a serious difficulty: Lacking any close friends, he has no one to stand by him at the altar.

So, on the advice of extravagantly effeminate wedding planner Edmundo (Ignacio Serricchio), Doug seeks out the services of best-man-for-hire Jimmy Callahan (Kevin Hart). For a price, Jimmy agrees to supply not only his own presence for the big day, but that of a hastily assembled — and thoroughly motley — crew of fake groomsmen.

Despite Jimmy’s rule that his relationships with clients must remain strictly professional — he’s only posing as their bosom buddy — the script, on which Garelick collaborated with Jay Lavender, sketchily traces his burgeoning affinity with Doug. Like Doug, Jimmy is an unwilling loner whose work dominates his life.

The screenplay also scores a few points off the kind of run-amok romanticism that leads brides like Gretchen to obsess over wedding details instead of concentrating on the solidity of the marriage to follow. In her case, it turns out, the forthcoming nuptials are based on the shakiest of foundations — with both future spouses acting out of shallow motives.

The potentially enjoyable proceedings first go seriously awry when Doug informs Jimmy that the nonexistent closest pal he’s going to be impersonating has been described to Gretchen as a Catholic military chaplain.

This revelation opens the way for dialogue highlighting Jimmy’s frustration with such a role — meaningless hookups with bridesmaids normally being one of the perks of his job. It also leads into supposedly humorous swipes at the clergy sex abuse scandal.

By the time Jimmy and Doug cement their bond amid a wild bachelor party, good taste has been left so far behind that Garelick and Lavender actually try to garner giggles by involving a dog in a sex act. The on-screen observers of this very public interaction — during which, unbeknownst to a blindfolded and bound Doug, Fido changes places with a prostitute — find it hilarious. We’re clearly meant to agree.

A glimpse into Edmundo’s private life, which shows his light-in-the-loafers persona — but not his orientation — to be entirely an act, is obviously intended as a jab at the stereotyping of gay men. Yet the sequence goes on, paradoxically, to mainstream homosexual unions by showing them to be as miserably quarrelsome as marriage.

The film contains anti-Catholic and irreverent humor, strong sexual content, including depraved activity with partial frontal nudity, a frivolous treatment of homosexuality, about a dozen uses of profanity and pervasive rough and crude language. The Catholic News Service classification is O — morally offensive. The Motion Picture Association of America rating is R — restricted. Under 17 requires accompanying parent or adult guardian.