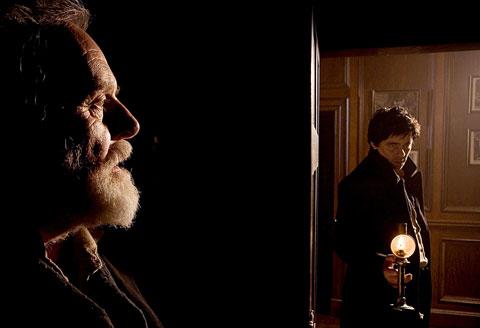 NEW YORK (CNS) — Alternately spooky, savage and silly, "The Wolfman" (Universal) entertains by rendering the trappings of lycanthrope lore with first-rate special effects and actors willing to feast on the material. A remake of the 1941 monster classic "The Wolf Man," it strikes a tone that might be described as "visceral camp."

The amount and kind of violence displayed is in keeping with the fear-inducing context. Though not for the squeamish, displays of the titular creature’s bloody handiwork rarely feel gratuitous and help keep the picture hovering somewhere between art and pulp.

Unafraid to exploit cliches of the werewolf subgenre, director Joe Johnston cuts to the cloud-shrouded moon and inserts howls with abandon. In general, his approach suggests a desire to satisfy horror aficionados and novices alike. That the protagonist’s transformations from man to beast are so convincing is a bonus for everyone.

Sympathy for Lawrence Talbot, played by Lon Chaney Jr. in the original, is heightened by Benicio Del Toro’s performance. Not only is Del Toro a feral actor, but the humanity of his characters never fails to come through. Following his brother’s mysterious, brutal murder, Lawrence — a famous stage actor — returns to his ancestral home in Broadmoor, England. The year is 1891.

Lawrence vows to discover who or what dismembered his late sibling. Many villagers believe the Gypsies encamped nearby are to blame. Inspector Abberline (Hugo Weaving) of Scotland Yard suspects Lawrence is the lunatic responsible for the attacks, which continue. Not surprisingly, the lupine curse hits close to home, entailing an oedipal struggle and a growing bond between Lawrence and Miss Conliffe.

Excessive digitization detracts from so many contemporary films, yet here the computer-generated effects enhance the narrative, as do the excellent make-up, costume and set designs. The story unreels efficiently and the wolf rampages are clear and frightening.

The (presumably Anglican) vicar of Broadmoor is depicted in an unflattering light, leading a vigilante posse against Lawrence and delivering a fiery sermon about the terror confronting the village. Yet he proves to be more prescient about its malevolent source than the medical establishment, represented by the staff at a London asylum who subject Lawrence to sadistic treatments (for which they pay dearly).

Lawrence is shown praying prior to the climactic scenes. This conforms to a snatch of verse used in the original film and intoned at the beginning of this update: "Even a man who is pure in heart and says his prayers by night / May become a wolf when the wolfbane blooms and the autumn moon is bright."

While such fatalism would be objectionable outside a genre so far removed from reality, here the sentiment is merely a passing detail meant to heighten the atmosphere of dread. Overall, despite the histrionics that come with the territory, it’s difficult to resist the old-fashioned — indeed corny — pleasures of "The Wolfman."

The movie contains frequent episodes of moderately graphic violence, including fleeting images of human entrails, decapitations, and severed limbs; an instance of partial upper female nudity; several references to prostitution; and one use of profane language. The USCCB Office for Film & Broadcasting classification is A-III — adults. The Motion Picture Association of America rating is R — restricted. Under 17 requires accompanying parent or adult guardian.