The year we all became birdwatchers: Writer Brian Doyle finds God in the birds - Catholic Courier 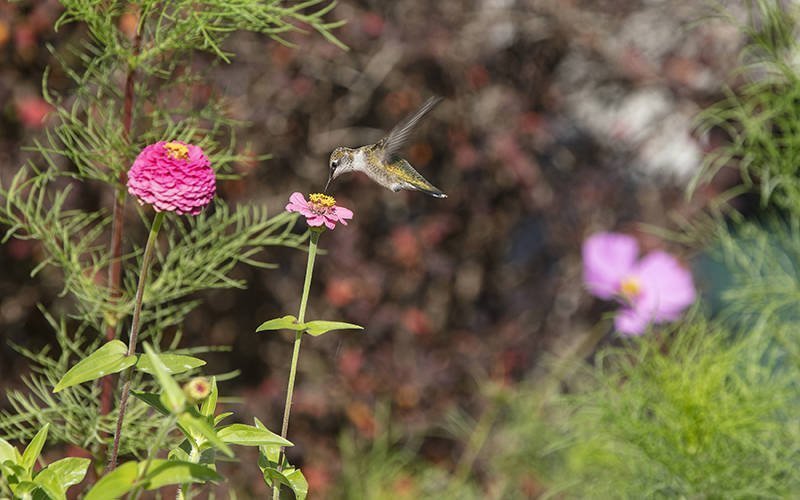 A hummingbird is seen getting nectar from a flower Sept. 28, 2019, in a garden on the grounds of St. Anthony of Padua friary in Butler, N.J. In one of his most famous essays, “Joyas Voladoras,” Brian Doyle ponders the glory of a hummingbird; those “flying jewels” whose heart is the “size of a pencil eraser” and beats 10 times a second. (CNS photo by Octavio Duran)

The year we all became bird-watchers: Writer Brian Doyle finds God in the birds By Shemaiah Gonzalez Catholic News Service

One surprising note of the past year is how many of us got into bird-watching! I remember old sitcoms from my childhood where a bird-watcher was its very own special type of nerd. They wore khaki shorts, knee socks, a Park Ranger hat pulled all too low over their head and, of course, the ever-present pair of binoculars. Now as an adult, in the time of “corona,” I want that outfit.

This year, we all became bird-watchers from our windows, on those long walks we found ourselves on more frequently and when we learned we really didn’t have anything better to do than to sit and stare at a body of water.

Brian Doyle, the beloved and award-winning Catholic writer who died in 2017 was ahead of his time. He loved “birding,” as the cool kids say. In each bird, he saw the marvels of God’s creation and sometimes God’s sense of humor.

Doyle was born in New York City in 1956 into an Irish Catholic “storytelling” family of eight children, a teacher mother and a journalist father. Doyle received a bachelor’s degree in English from the University of Notre Dame in 1978 and worked at U.S. Catholic and Boston College Magazine before moving to Oregon.

On the morning of his wedding to Mary Miller Doyle, their priest said that he knew he was supposed to give Brian some sort of spiritual advice but his “only advice is you marry that girl or else I will leave the priesthood and marry her tomorrow. There’s only one woman like that in a generation, and God knows why you were chosen for such a gift but that appears to be the case.”

Together they had three children, who “emerged from (his) wife one after another like a circus act” and in whom they delighted. In 1991 Doyle was named the editor of Portland magazine, where he led the helm while writing six collections of poetry, 13 essay collections and seven novels.

Doyle wrote about his family, his wife, his children, strangers, Girl Scouts, toothbrushes, hot showers and anything else that came within a mile radius of himself. He saw God in all of these ordinary, everyday objects. God’s mercy and love and kindness surged through all these living (and nonliving) things — especially birds.

In one of his most famous essays, “Joyas Voladoras,” Doyle ponders the glory of a hummingbird; those “flying jewels” whose heart is the “size of a pencil eraser” and beats 10 times a second. Did you know hummingbirds visit a thousand flowers a day? Doyle did.

He researched every facet of beared helmetcrests and red-tailed comets and purple-crowned fairies. He knew that they could fly backward, dive at 60 miles an hour and could fly more than 500 miles without stopping.

But it is that tiny, little pencil eraser heart that Doyle kept coming back to, as if to look closer is to find the very breath of God, a God who cares for a bird with a heart the size of a pencil eraser.

This heart drives the most “ferocious metabolisms.” It is a “race-car heart” that eats oxygen at an “eye-popping rate.” Doyle writes of a hummingbird’s “mad search for food, the insane idea of flight. The price of their ambition is a life closer to death; they suffer more heart attacks and aneurysms and ruptures than any other living creature.”

In this heart, we see our own echoed. “So much held in a heart in a lifetime,” Doyle writes; when we are older we know “that all hearts finally are bruised and scarred, scored and torn, repaired by time and will, patched by force of character, yet fragile and rickety forevermore.”

But it wasn’t just hummingbirds that caught his attention, herons too. In fact, Doyle writes about herons so often, I’d dare to say they might have been his favorite bird. In the fantastic “A Book of Uncommon Prayer,” a collection of 100 prayers of the “miracle and muddle of the ordinary,” Doyle writes about the heron:

“The way they are long, and thin, and still, and elegant, and shaggy, and awkward, and not at all awkward, and lean, and gangly, and knobby-kneed, and bluegraybrown all at once, and slow and dinosauric in the air but liquid-quick with their bladed beaks.”

All at once, I both realize that he has perfectly described a heron and that I haven’t looked as closely at a heron as Doyle did. And Doyle sees our God in this creature: “Yes, somehow. In all of this is the Breath, the Imagination, the voice that said ‘I am who am’ from the fiery bush, long ago.”

Reading Doyle’s reflections on birds fills you with absolute gratitude to be alive, to be able to witness such beauty and glory. “I have come to think that the birds are shards of faith themselves in mysterious ways. You could spend a whole life contemplating birds and never come to the end of the amazing things they do,” he writes.

And then, you realize, all that bird-watching we’ve been doing, has been prayer.