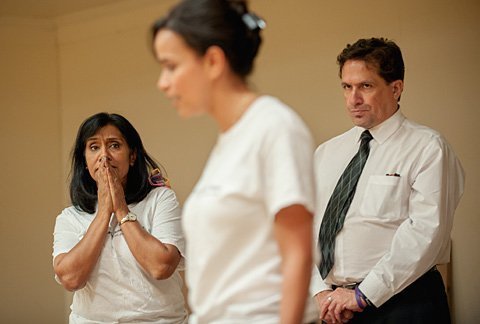 "Mi Casa es Su Casa" is about how a Latina mother and daughter live together in a house that they’re about to lose to foreclosure and how they "weather the ups and downs of this life experience," said Annette Ramos, one of the company’s founders who also directed the play.

Jose Casada, who wrote the one-act play featuring three of the company’s actors, said that a TV documentary about the housing crisis inspired him to write the piece that made its premier Aug. 23 at the Sankofa Evening of Theatre and Jazz Fest.

"We are telling … a slice of this big thing, the housing bubble, and what that looks like at the personal level, at the family level," he said during an Aug. 13 rehearsal at Reformation Lutheran Church on North Chestnut Street.

The church basement is the new home base of the year-old company, which also is in the midst of acquiring its nonprofit status, explained Stephanie Paredes, cofounder and board president.

"We’re very, very blessed," added Ramos, who said that the partnership with the church will include the company members working with the congregation on service projects.

When Ramos arrived Aug. 13 with cast members Gladys Pedraza-Burgos and Mary Mendez Rizzo, the play’s central characters, they got right to work in the basement setting up the props on its stage and beginning a run through. Ivan Ramos, who plays the bearer of the bad news of foreclosure, arrives a short while later and jumped right into his scene.

For Pedraza-Burgos, working on the play hails back to her high school days of theater and poetry. She welcomed the opportunity to return to the stage when asked to audition, especially when the character she played resonated with her personally, she added.

"When I first read the script, I was really interested," said Pedraza-Burgos. "I thought, "Oh my God, this is mamí.’ All I have to do is act like mamí."

While "Mi Casa es Su Casa" is the company’s first original play, its first production, "Shadows of our Faces/Sombras de Nuestros Rostros," debuted in August 2012 at the Sankofa Fest and was a series of monologues written by the cast members.

That first show followed talks with Ramos about starting up a company that would focus on telling the stories of Latinos, said Paredes, who is the multicultural student life coordinator at Rochester Institute of Technology. After a few "stops and starts," the women decided to go for it and founded RLTC, she said.

Ramos said that she received advice from the heads of other local arts groups, including Borinquen Dance Theatre and Young Audiences of Rochester where she works as an education services manager. That connection will enable the RLTC and Young Audiences to fulfill each of their missions, said Lydia Boddie-Rice, chief executive officer for Young Audiences.

"I envision leveraging our influence as a self-supporting affiliate of the national (Young Audiences) network to bring the Latino experience to a broader national audience as well as to use our organizational capacity to expand RLTC’s outreach efforts," added Boddie-Rice.

Paredes said that the company hopes to create such partnerships with other arts organizations as well to continue broadening their reach.

"This company is for Latinos, by Latinos and written by Latinos, but we want non-Latinos to come and be exposed to our (stories)," she said. "We are Latino-based but not Latino exclusive."

That includes inviting everyone in the community to audition, Paredes said. New members are asked to write a monologue about an experience from their own lives, which is the basis of "Shadows of our Faces/Sombras de Nuestros Rostros," she added.

Given all the positive feedback the company has received for that show, the skeleton of that bilingual play will remain but monologues will be swapped in as new members join, she said.

The company will present the show again Sept. 20 and 28 at Writers & Books as part of this year’s Rochester Fringe Festival.

"What we received was overwhelming support from … people who were Latino and people who weren’t," Paredes said of the series of shows the company held at MuCCC Theatre earlier this year. "(Latinos) really felt like,’my story was on stage.’"

The company has grown to about 15 members and not all will act on stage even though they will be asked to learn all the jobs required for a production, Paredes said.

Directing is the job most familiar to Casada, an experienced film and television writer and director from New York City. So not directing the play he wrote was a challenge, he said.

"I’m always directing," Casada said. "So, I’m reigning it in, which is a great exercise."

He said that he found the company by searching for the words "Latino theatre" when he first moved to the area more than a year ago. He soon connected with Ramos and learned the company was just starting up.

"I thought I’d find something that had been established for a decade or something," he said. "The timing was just right."

Ramos said that she is so proud that the company has accomplished so much in a year — establishing community partnerships, creating new pieces and recruiting more members.

"We currently are in the process of developing our 2014 season and looking to partner with additional arts organizations like TheatreRocs, the Arts & Cultural Council, and expand … to tour and serve other Latino communities in Buffalo, Syracuse and surrounding areas," she said.