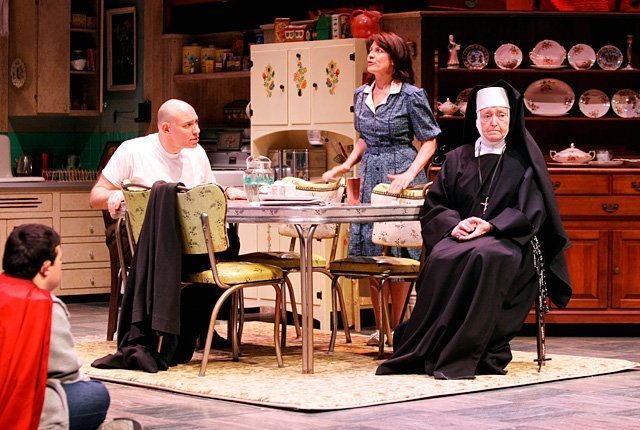 Tom Dudzick’s “Miracle on South Division Street,” which is about a Catholic family, is part of Geva Theatre’s 2015-16 lineup. Dudzick’s “Over the Tavern” (above) was performed at Geva in 2011.

As Rochester’s Geva Theatre prepares to raise the curtain on its 43rd season this fall, many of the upcoming shows contain themes involving Catholic teachings and values.

It was something Artistic Director Mark Cuddy did not do consciously.

"We do a lot of talking during season planning about what is going on in our community, what are the important issues that are facing us," explained Cuddy, who, along with many other staff members, is Catholic. "Social justice, we always start there, because it is an important, carnate topic."

Social-justice topics, Cuddy observed, sometimes are incorporated into productions by writers who were raised Catholic. It also makes sense to incorporate Catholic values and traditions into Geva’s season since Catholicism is one of the largest religious denominations in the Rochester area, he said.

"It is important that people can be entertained (by Geva productions), but also feel that there is something that is touching upon their lives," Cuddy said. "We are always breaking down new barriers and trying to introduce live, professional theater to new audience members."

Prior to the start of the new season, Geva will host a first-time festival during which the themes of rebirth and renewal will be prominent.

The festival, "Journey to the Son: A Celebration of Son House," will celebrate the life and legacy of the blues musician Son House. House spent time in Rochester in the 1940s, and after fading from the music scene, it was in Rochester where he was rediscovered. The festival will take place in late August and feature national and local musicians and performers, as well as workshops and discussions about House, his legacy and his connection to Rochester.

The focus of the festival will be the reading of a play about House that was written by Pulitzer-nominated playwright Kevin Glover.

House also has relevance in the local Catholic community, as a Providence Housing Development Corp. apartment community on Joseph Avenue in Rochester is named after him. Providence, an agency of Catholic Charities of the Diocese of Rochester, develops, finances and manages housing for individuals and families.
In addition to the festival, the following shows in Geva’s 2015-16 lineup contain underlining themes involving Catholic teachings and values:

"It is a moral story, but it questions some of the mythologies that we have been built up around the church or around belief," Cuddy said.

"To Kill a Mockingbird"

Appearing on the Mainstage in February 2016 is Harper Lee’s Pulitzer Prize classic, "To Kill a Mockingbird." The story focuses on the themes of racial injustice and the object of innocence, as attorney Atticus Finch is appointed to defend a black man who has been framed for a crime he did not commit. While the story is set during the Great Depression, Cuddy said there is a correlation between the play and recent events that have taken place in Ferguson, Mo., and Baltimore, Md.

"Once we decided to do it, we found that a number of theaters are doing it because of the current events going on in our country," he said. "Theaters are trying to find a way for the community to understand some of the seeds of what is going on now and that those seeds were planted a long time ago."

"Sister" will be back with a brand-new show, "Sister’s Easter Catechism: Will My Bunny Go to Heaven?" She will answer the question, "Why isn’t Easter the same day every year like Christmas?" and will uncover some of the origins of Easter eggs and the Easter Bunny.

Both "Late Night Catechism" and "Sister’s Christmas Catechism" were audience favorites, Cuddy said, and he is expecting this production to be just as popular.

EDITOR’S NOTE: Geva Theatre’s 2015-16 season gets underway on Sept. 9 with Monty Python’s "SPAMALOT" and concludes with "May Queen" on May 29, 2016. For more information, visit www.geva.org.