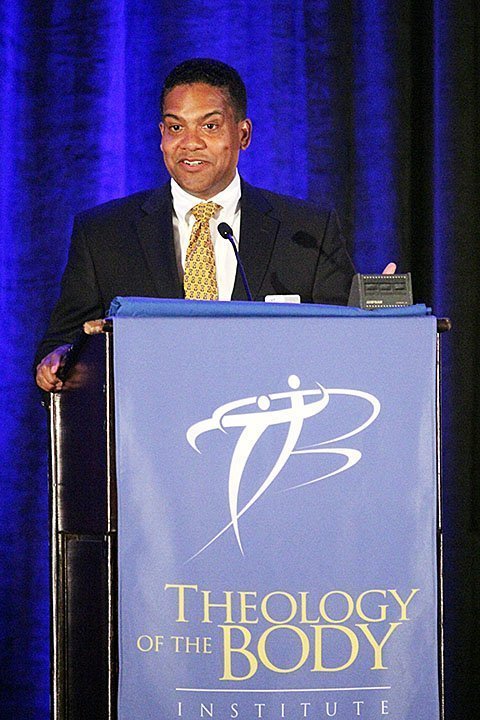 Damon Owens, executive director of Theology of the Body Institute, speaks July 11 during the institute's international congress in Philadelphia. Laypeople, clergy and religious attended panels, discussions and keynote addresses at the July 9-11 congress that examined the meaning and relevance of St. John Paul II's theology of the body.

PHILADELPHIA (CNS) — Damon Owens has made quite a name for himself over the past two decades as a speaker, writer, and radio and television commentator teaching and explaining the Catholic stance on such topics as sexuality, chastity, theology of the body and natural family planning.

Although he has been executive director of the Theology of the Body Institute in Downingtown for the past two years, for most of the previous years his special focus was on NFP.

If your idea of Natural Family Planning is birth control for Catholics who don’t want kids but want to stay in good graces with the church, think again. Owens and his wife, Melanie, are the happy parents of eight, and wouldn’t have it any other way.

To take his story back to the beginning, "I’m a recovering engineer," he explained in an interview with CatholicPhilly.com. He spoke to the online news outlet of the Philadelphia Archdiocese during the institute’s International Theology of the Body Congress July 9-11 in Philadelphia.

"I have a bachelor’s degree in mechanical engineering from Brown University and a master’s degree from the University of California, Berkley," he said. "For 16 years, I worked for Bell Labs and Lucent Technology but left in 2001 to start my own company. After 12 months, I was bought out and decided I didn’t want to work corporate anymore."

He and Melanie thought about it for a bit and prayed over it, and ultimately he decided he would devote full time to what they had been doing part time — speaking and working in the area of marriage and the family. That is something he and Melanie had been doing since 1993.

The couple also were the NFP coordinators for the Archdiocese of Newark, New Jersey. NFP consists of various natural methods to ascertain the rhythms of female fertility and regulate birth in conformity with Catholic teaching.

Gifted with a fine speaking and singing voice, he got to sing a solo before his hero Pope John Paul II in 1995. It was a Communion reflection at the papal Mass at Giants Stadium when he sang "Jesus, You Are the Center of My Joy."

After he was free from the responsibilities of the business world he and Melanie founded two related nonprofits — New Jersey Natural Family Planning and Joy-Filled Marriage, New Jersey.

As very young adults neither Damon nor Melanie would have dreamed their life would take this turn. She was raised in California; he in New Jersey, where he was an Eagle Scout in his youth. Both were products of strong Catholic families of similar backgrounds but both drifted away from practice of the faith during their college years.

"At that age you have questions beyond what you know, and if you don’t get answers you look somewhere else," he said.

Early in their relationship, Damon and Melanie were not living in accordance with the teachings of the church, he conceded. "It was a priest in a parish in Oakland, California, who brought us in," he said. "Even though we were sinful young adults he loved the way we loved each other and he was able to answer the difficult questions we had. We came back strong."

They were especially drawn to NFP by studying Pope Paul VI’s "Humanae Vitae" and introduced to Theology of the Body through a tape by Christopher West, an author and lecturer who has popularized the theology developed by Pope John Paul. West co-founded the Theology of the Body Institute in 2004.

"After that 40-minute presentation (on tape), I knew exactly what it was about," Owens said. "It was a beautiful approach."

Meanwhile, their own family was already forming. First born was Naomi, now 18. She was followed by Leah, Rachel, Therese, Collette and Veronica. Then came two miscarriages, which left Damon and Melanie devastated. They turned to adoption. In 2009, they adopted Olivia, and the following year, Nathan.

All eight children were at the Philadelphia congress, with the older girls volunteering at the registration desk in support of their dad. It was fitting, because theology of the body is about the whole family, not just husband and wife.

When the executive director spot opened up at the institute, it was a natural fit for Owens, both because of his work on the speakers’ circuit and the expertise he garnered during his years in the business world.

He still keeps up a busy teaching schedule. On the final day of the congress, he gave a presentation titled "Love, Mercy and the New Evangelization: Transformation through Reverence for the Other."

"Teaching theology of the body is so new only a fraction of the people has ever heard about it," he said. "This is an exciting time and the issue is so relevant to our times."

Baldwin is a freelance writer in Philadelphia.