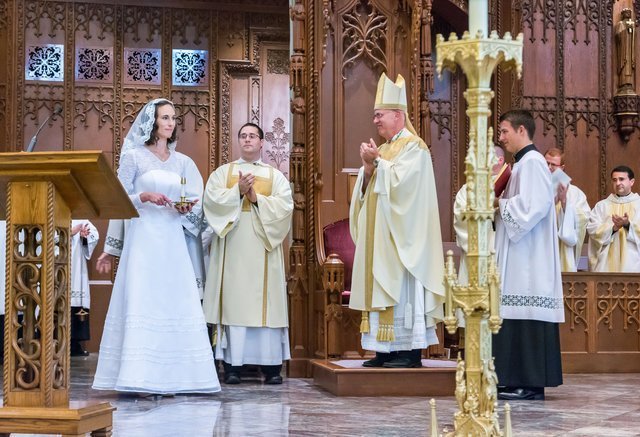 Bishop Kevin C. Rhoades of Fort Wayne-South Bend, Ind., and the assembly congratulate Jessica Hayes, a theology teacher from Bishop Dwenger High School in Fort Wayne, who took vows Aug. 15 as a consecrated virgin at the Cathedral of the Immaculate Conception.

FORT WAYNE, Ind. (CNS) — Jessica Hayes, a popular high school theology teacher in Fort Wayne, said her consecration as a virgin is her place in the Catholic Church.

Hayes said she felt a "deep gratitude for the church and for being Catholic, knowing whatever desire is placed upon our hearts by God, the church has a place for us.

"And this is my place," she told Today’s Catholic, newspaper of the Diocese of Fort Wayne-South Bend.

On Aug. 15, the feast of the Assumption, Hayes’ students from Bishop Dwenger High School, graduates of the school, friends and fellow parishioners of St. Vincent de Paul Parish — along with priests, brothers, seminarians and religious sisters — filled the Cathedral of the Immaculate Conception in Fort Wayne for her consecration.

"God has called Jessica to be more closely united to himself and to be dedicated to the service of the church," he said in his homily. "It is God who gives the grace of virginity. He gave this grace to the young woman of Nazareth, to Mary, who was inspired by the Holy Spirit to choose the life of virginity. Mary made a personal decision in faith to remain a virgin, to offer her heart to the Lord. She wanted to be his faithful bride."

"Thus, Mary became the model for all those who have chosen to serve the Lord with an undivided heart in virginity," Bishop Rhoades added. "It seems most appropriate that Jessica gives herself totally to Jesus, is consecrated to a life of virginity, on a feast of Our Lady, who gave herself totally to God as the virgin handmaid of the Lord."

After the chanting of the Gospel, the actual rite of consecration began, and the candidate was formally presented to Bishop Rhoades.

The bishop called her forward, and after the homily, Hayes was asked to declare her resolution to persevere in the holy state of virginity as a bride of Christ, a witness to God’s love and a sign of the kingdom of heaven.

Hayes knelt before Bishop Rhoades, who said the prayer of consecration.

After the prayer, the bishop gave a veil to the newly consecrated young woman: "Receive this veil, by which you are to show that you have been chosen from other women to be dedicated to the service of Christ and of his body, which is the church."

He then presented Hayes with a ring "that marks you as a bride of Christ," and gave her a book containing the Liturgy of the Hours.

Later, in the interview with Today’s Catholic, Hayes noted that last year with the diocesan consecration to Jesus through Mary on the feast of the Assumption — before she and Bishop Rhoades had chosen the date for her consecration — "as we were walking (in) the procession with Our Lady after that consecration Mass, I thought, ‘I bet this will be my day.’ And that seems like a perfect day. So I renewed my Marian consecration on that same day in honor of that."

Weimer said she thinks the life of a consecrated virgin "is a beautiful vocation. And I think our diocese is so lucky to have her because her job is to pray for our church and for our diocese."

Weimer said she was pleased, happy and blessed to be asked by Hayes to be an attendant. Hayes, Weimer and Fogarty, as a group of friends, have been praying about vocations for some time, Weimer noted.

Fogarty, a teacher at Bishop Dwenger High School, has been Hayes’ friend for the past nine years.

"It’s a vocation that a lot of people don’t know about, so it’s not something that even comes to mind," said Fogarty. "But when she explained what it was and that she was going to be a consecrated virgin, it made a lot of sense. I can very much see that is what God’s plan is for her."

Johnson is editor of Today’s Catholic, newspaper of the Diocese of Fort Wayne-South Bend.