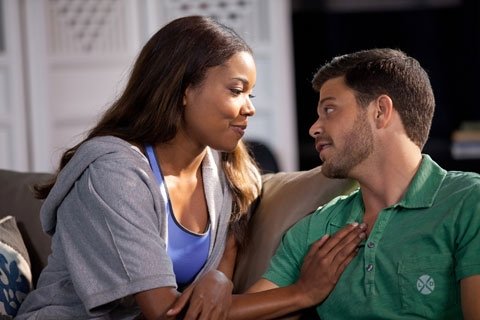 As directed by Tim Story and adapted by Keith Merryman and David A. Newman from Harvey’s "Act Like a Lady, Think Like a Man," the proceedings veer into something resembling an infomercial at times, as Harvey himself pops up to address the audience. But the script quickly regains its bearings.

Fast-moving quips and frank talk about how men and women still can’t communicate in an era of seemingly unlimited sexual freedom keep the tone light. Since it implicitly treats premarital sex and the option of cohabitation as a given, however, the picture offers no genuine critique of this supposed freedom such as would necessarily be posed by those adhering to scriptural values.

Still, Harvey’s advice is nothing you haven’t heard from your grandma, if you have one who dispenses pithy wisdom: All decisions have consequences. Men should have goals and be providers and role models for children. And everyone needs to be honest and realistic.

"Times have changed," Harvey tells women, "but your playbook hasn’t. Until you get into the mindset of a man, you will never win in the game of love."

It’s not that difficult, he insists. "We’re kind of like dogs. If you pet us, we’ll be loyal to you forever."

The film follows the romantic adventures of Lauren and Dominic (Taraji P. Henson and Michael Ealy), Zeke and Mya (Romany Malco and Meagan Good), Michael and Candace (Terrence J and Regina Hall) and Jeremy and Kristen (Jerry Ferrara and Gabrielle Union). Kevin Hart provides comic relief as Cedric, who’s about to get a divorce — or so, at least, he thinks.

The women get to Harvey’s book first, and start reshaping their relationships.

Lauren and Dominic’s pairing faces the largest hurdle, since she’s a hard-charging corporate executive and he’s a struggling chef who has to deceive her in order for them to date. Single mom Candace must struggle with Michael’s deep attachment to his domineering mother, Zeke is up against Mya’s "90-day rule" for sex, and Kristen tries to make an adult out of commitment-shy Jeremy, whose lifestyle is still redolent of the frat house.

The men eventually discover what the women have been up to and try to regain control by adapting Harvey’s advice to their own purposes. But they fail because they employ deception.

Unvarnished, earthy, sometimes over the top but never crude, the film manages to deliver a reassuring — if secular-minded — homily about the confusing process of looking for, and finding, true love.

The film contains implied premarital relationships, a scene of marijuana use, fleeting profanity, pervasive crude language and sexual banter and a single use of the N-word. The Catholic News Service classification is A-III — adults. The Motion Picture Association of America rating is PG-13 — parents strongly cautioned. Some material may be inappropriate for children under 13.