This Is 40 - Catholic Courier 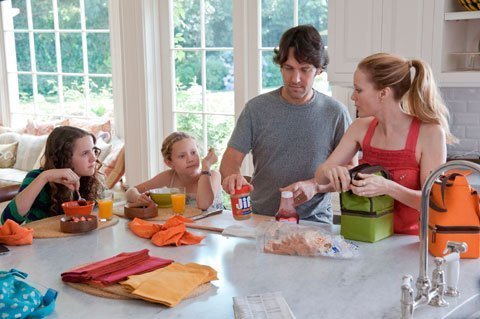 NEW YORK (CNS) — The supposed miseries of middle age — and of marriage — are showcased in the shrill comedy "This Is 40" (Universal). In updating the lives of secondary characters from his 2007 film "Knocked Up," writer and director Judd Apatow shows them struggling to be true to their mutual commitment.

But the rewards of such fidelity seem purely theoretical compared to their very real — and constant — irritation with each other as well as their shared sense of entrapment.

As their landmark 40th birthdays loom, small record label owner Pete (Paul Rudd) and his wife, Debbie (Leslie Mann — Apatow’s real-life spouse), share a large suburban house in Los Angeles and an abundance of problems. For starters, he’s concealing the woeful state of their finances from her while she’s trying to discover who has been stealing from the till at the dress shop she runs.

Each also has parental difficulties: Pete’s father, Larry (Albert Brooks), is a lazy moocher who uses Jewish guilt to compel Pete to lend him large sums of cash. Debbie’s prosperous, WASP-y dad Oliver (John Lithgow) is emotionally distant, and the two are semi-estranged.

Pete spends hours in the bathroom trying to get away not only from Debbie but from their two girls, Sadie and Charlotte (they’re played, respectively, by Apatow’s daughters Maude and Iris). Debbie’s floundering attempts to foster family togetherness by restricting Sadie’s obsessive use of electronic gadgets are met with howls of protest from the teen.

Not surprisingly, Pete and Debbie’s troubles extend to the bedroom. Their conflicts in that quarter are treated with excessive explicitness, beginning with the opening scene.

A more unusual moral concern arises from Pete and Debbie’s interaction with the mother of one of Sadie’s schoolmates. They behave abusively toward her and her son, and then lie about it when called to a conference in the principal’s office. Though this is all played for laughs, their successful deceit leaves them with a common sense of victory that temporarily repairs their frayed ties.

In keeping with the pro-life sentiment underlying "Knocked Up," a subplot involving an unexpected pregnancy laudably excises the option of abortion. It’s at least implicitly made clear that such a choice is not even considered by the characters involved.

But, as in the earlier movie, this positive, if unspoken, message is a brief glint of gold amid a mire of degraded views, obscene language and crass humor.

The film contains strong sexual content, including graphic scenes of marital lovemaking and of aberrant sexual activity, upper female and obscured rear nudity, drug use, about a dozen instances of profanity, relentless rough and crude language, some scatological humor and a couple of obscene gestures. The Catholic News Service classification is O — morally offensive. The Motion Picture Association of America rating is R — restricted. Under 17 requires accompanying parent or adult guardian.