This Is the End - Catholic Courier 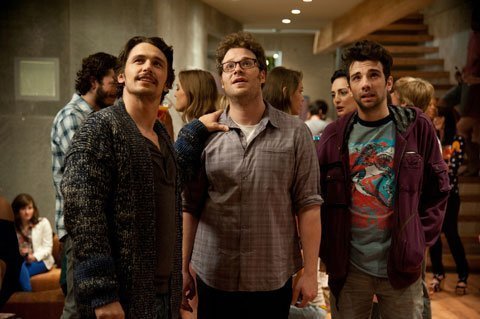 NEW YORK (CNS) — About as funny as doomsday might be an apt assessment of the Armageddon-themed comedy "This Is the End" (Columbia). Intended as an amusingly outrageous romp through the End of Days, the movie winds up delivering — to paraphrase poet T.S. Eliot — a long-winded whimper rather than a bang.

The tedious proceedings find an ensemble of actors playing themselves — most prominently James Franco, Jonah Hill, Seth Rogen (who directed, with Evan Goldberg) and Jay Baruchel — holed up in Franco’s Los Angeles mansion during the Apocalypse. There they squabble, trade insults and generally waste their time — as well as the audience’s.

In expanding Jason Stone’s 2006 short film "Jay and Seth vs. the Apocalypse," Rogen and Goldberg, who also wrote the script, celebrate altruism and loyal friendship. But no other virtue dividing those caught up in the rapture from those left behind seems comprehensible to them, certainly not moderation in the pursuit of worldly pleasures.

The separating of the saved from the damned as portrayed in the film, it should be pointed out, owes more to various strands of evangelical theology than to a Catholic reading of the Book of Revelation.

As for the picture’s general treatment of matters religious, it might best be described as frivolous affirmation.

The existence of God, heaven and — implicitly, at least — hell are all acknowledged. Yet, Rogen and Goldberg turn these realities to their own purposes, such as a silly, though not blasphemous, set-piece involving an exorcism and the eventual unleashing of various more-than-anatomically correct male demons. As for life beyond the pearly gates, it’s revealed as a crowded eternal cocktail party at which one can actualize one’s drug of choice simply by wishing for it.

Gross-out humor makes a predictable appearance, but in an even more unpleasant form than usual as minor characters are impaled, beheaded and brutally stampeded into the ground by terrified crowds. As they flee the wrath to come, all those not easily tickled by sophomoric humor should take the hint and hightail it away the box office.

The film contains a comic treatment of sacred subjects, scenes of gruesome bloody violence, strong sexual content including a graphic glimpse of aberrant sexual activity with rear nudity, a benign view of drug use, much sexual and some scatological humor, occasional instances of profanity and pervasive rough and crude language. The Catholic News Service classification is O — morally offensive. The Motion Picture Association of America rating is R — restricted. Under 17 requires accompanying parent or adult guardian.