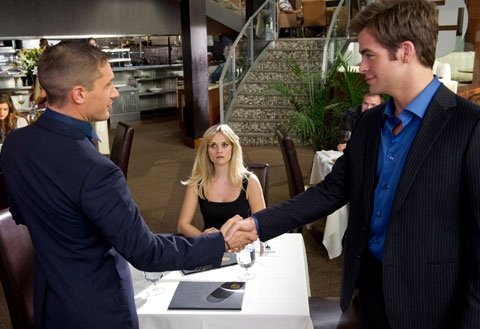 NEW YORK (CNS) — Ill-conceived cinematically, and pervaded by a misguided view of human sexuality, the action and romance blend "This Means War" (Fox) quickly fights itself to a stalemate.

Director McG tracks the rivalry between two CIA agents and best friends, FDR (Chris Pine) and Tuck (Tom Hardy), after they both fall for perky consumer goods tester Lauren (Reese Witherspoon). While her suitors bring the resources of the spy world to bear in an increasingly frantic effort to thwart each other, confused Lauren turns for advice to her closest pal Trish (Chelsea Handler). Trish’s pointers, though meant to be comic, are more often low-minded. Indeed, the occasional one-liner aside, the humor on offer here rarely works.

Suave FDR — named, and nicknamed, for the 32nd president — is the footloose playboy type. Tuck, the divorced father of a young son, is not only out of practice at playing the field; he’s also shown, early on, to be anxious for reconciliation with ex-wife Katie (Abigail Leigh Spencer).

The path to a generally moral — though not unmixed — wrap-up sees FDR sufficiently smitten with Lauren to consider a committed lifestyle. Still, Timothy Dowling and Simon Kinberg’s script takes it for granted that a dating couple reach the bedroom together long before they get anywhere near the altar. And, since Lauren is a partner in two such pairings simultaneously, we are left in at least temporary suspense as to how many beds she may be occupying in sequential short order.

The fairly transparent effort to craft a date movie with appeal to both genders, moreover, means that the main duo’s competitive wooing is interspersed with explosions, gunplay and hand-to-hand combat. The springboard for introducing these elements is a subplot about an international arms dealer named Heinrich (Til Schweiger) whose machinations FDR and Tuck have been assigned to foil.

"War … what is it good for?" demanded a classic 1970 Motown tune. In the case of this onscreen dust-up, the answer is, not a whole lot.

The film contains considerable action violence, skewed sexual values, brief semigraphic premarital sexual activity, a few instances of profanity, some adult humor and references, at least one use of the F-word and about a dozen crude or crass terms. The Catholic News Service classification is A-III — adults. The Motion Picture Association of America rating is PG-13 — parents strongly cautioned. Some material may be inappropriate for children under 13.