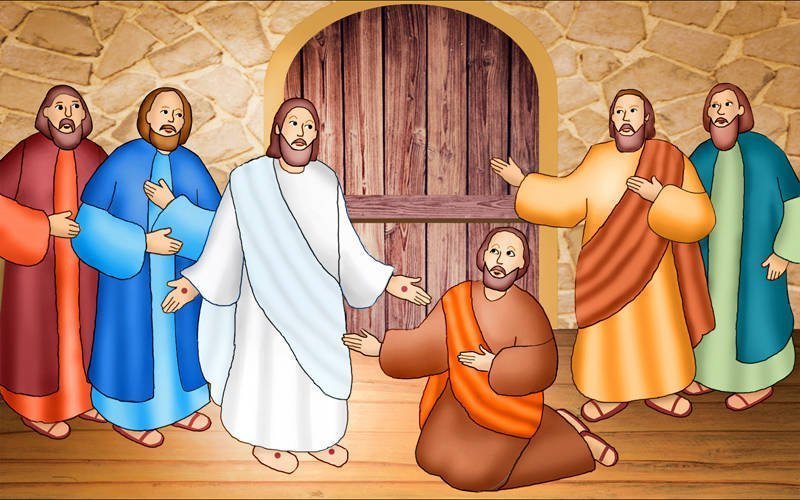 This is the artwork for Kids’ Chronicle for April 11, 2021. (Illustration by Linda Rivers)

On the first day of the week, Mary of Magdala visited the tomb where Jesus’ body was laid after he died on the cross.

But Jesus’ body was gone.

Mary rushed to tell Peter, who ran to the tomb with another apostle. All they saw inside were Jesus’ burial cloths.

Peter and the other apostle went home while Mary stayed behind to weep.

As she was crying, she looked in the tomb and saw two angels. They wanted to know why she was so upset.

“They have taken my Lord, and I don’t know where they laid him,” she sniffled.

Suddenly, a man appeared behind Mary. It was Jesus, but she did not recognize him at first. When she did, she was extremely excited and happy to see him.

“Stop holding on to me, for I have not yet ascended to the Father,” Jesus told her. “But go to my brothers and tell them, ‘I am going to my Father and your Father, to my God and your God.’”

Mary told the apostles all that she had seen and heard.

Later that evening, as some of the apostles were gathered in a locked room, Jesus appeared in their midst.

“Peace be with you,” he said as he showed them the wounds in his hands and side.

As the apostles rejoiced, Jesus breathed on them.

“Receive the Holy Spirit. Whose sins you forgive are forgiven them, and whose sins you retain are retained,” he told his friends.

Thomas was one of the apostles who was not there when Jesus appeared. When his friends told him they had seen Jesus, he refused to believe them.

“Unless I see the mark of the nails in his hands and put my finger into the nailmarks and put my hand into his side, I will not believe,” Thomas declared.

A week later, Jesus again appeared to the apostles. This time, Thomas was present.

“Put your finger here and see my hands, and bring your hand and put it into my side,” Jesus told Thomas, “and do not be unbelieving, but believe.”

“My Lord and my God!” he exclaimed.

1. Where did Jesus appear to the apostles?

2. What did Thomas say he needed to see to believe?

ESSAY: What can you learn from Thomas’ initial disbelief?

Jesus appeared to his followers a few more times before returning to his Father in heaven.

For example, in Luke 24, we read that two of Jesus’ followers were walking from Jerusalem to the nearby village of Emmaus. As they walked along, another man whom they did not know started walking with them.

This man was Jesus, but his followers did not recognize him. The two men talked about Jesus’ death and how his body was missing from his tomb.

After the trio reached Emmaus, the two men asked Jesus to eat a meal with them. It was not until Jesus blessed some bread and gave it to them that they recognized him.

In John 21, Jesus appeared to seven of his followers, who were fishing in a boat on the Sea of Tiberias.

As the boat was coming to shore, they saw a man standing there. It was Jesus, but they did not recognize him until he called out to Peter. Peter was so excited that he jumped into the water so he could get to shore faster.

After Jesus fed them fish and bread, he turned to Peter. He asked Peter to feed his lambs and tend his sheep, which meant he wanted Peter to watch over the faithful after Jesus returned to heaven.

St. Anselm was born in Italy in 1033. As a youth, he wanted to become a monk, but his father didn’t approve, so he chose a secular life instead.

He moved to France after his mother’s death and continued his studies with her family. He joined the Benedictines in Normandy in 1060 and was elected abbot of his order in 1078.

He became archbishop of Canterbury, England, in 1093, a post he held until his death in 1109. He was exiled twice due to conflicts with English monarchs.

We remember this doctor of the church on April 21.

Unscramble the words and arrange them to form a sentence from the children’s story.

My Lord and my God!