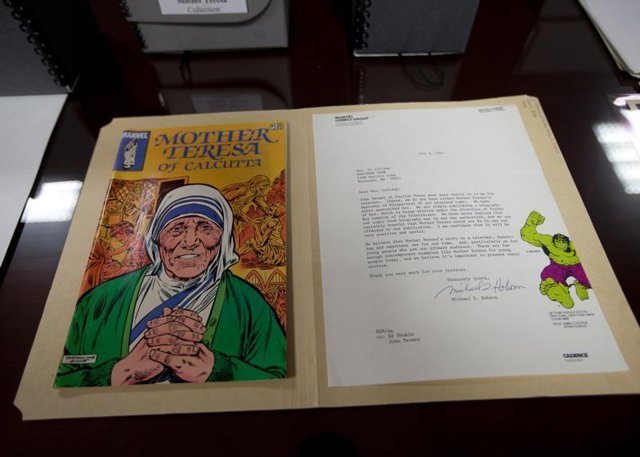 A comic book about Blessed Teresa of Kolkata published by Marvel Comics in 1983 is seen at The Catholic University of America in Washington Aug. 30.
By Mark Pattison
Catholic News Service
WASHINGTON (CNS) – Not many people know that Blessed Teresa of Kolkata’s first visit to the United States was a trip to Las Vegas — in 1960, when the Strip was still mobbed-up.
She didn’t go to cleanse the casinos of their corruption. She went to speak at the convention of the National Council of Catholic Women.
That tidbit is one of an untold number of facts and perspectives that can be gleaned from examining the Mother Teresa Collection that resides within the archives at The Catholic University of America.
The collection has a copy of Mother Teresa’s 1979 Nobel Peace Prize acceptance speech, autographed by the founder of the Missionaries of Charity herself. There are also two copies of the Marvel Comics illustrated biography of her life, issued in 1983, one year after Marvel successfully published a comic-book biography of St. John Paul II.
There also are, in a burlap bag, 2,000 tiny coins bearing Mother Teresa’s likeness struck for the United Nations for its 1975 observance of the Year of the Woman.
Even without the coins, there are an estimated 10,000 items in the collection, according to Shane MacDonald, an archives technician at the university who spent four months organizing and cataloging the materials.
With Mother Teresa’s canonization set for Sept. 4, the collection will represent the archives’ first collection dedicated to a saint, MacDonald said. While Catholic University has the chairs St. John Paul II used when he celebrated Mass in Washington, it does not represent a detailed collection like that for Blessed Teresa.
Many items came from Eileen Egan, who had worked for Catholic Relief Services, the U.S. bishops’ overseas aid and development agency, when it was founded in 1943 as War Relief Services during World War II. As part of her work in Asia, Egan was told of a nun in India who was ministering to the poor.
Egan traveled to Kolkata, then known as Calcutta, in 1955 and met Mother Teresa. She was convinced of the value of the nun’s work among the poor in the city’s teeming slums and struck up a friendship with her.
The friendship led to a correspondence stretching over four decades. MacDonald, who has read much of the letters from Mother Teresa to Egan that are in the collection — Egan’s part of the correspondence appears lost to history — said Egan became an advocate for Mother Teresa’s ministry. It was Egan, for instance, who convinced the reluctant Macedonian-born nun, a virtual unknown, to travel to Las Vegas to address the NCCW.
MacDonald told Catholic News Service in an Aug. 30 interview that Mother Teresa, who had entered religious life with the Sisters of Loreto, expressed similar unease about returning to Ireland, where she had ministered before the war, for the first time in 30 years because she was uncertain of her reception.
Egan, who routinely obtained travel documents for others because of her work at CRS, also did so for Mother Teresa as she coaxed the nun to travel more to spread her message of love and mercy, MacDonald said. She later wrote a definitive biography of the future saint, "Such A Vision: Mother Teresa, the Spirit, and the Work."
As Mother Teresa’s ministry began to captivate the imaginations of people, support organizations for her and the Missionaries of Charity sprang up in the United States, Malta, Germany and elsewhere. Their newsletters are also part of the collection.
So too are seldom-seen photographs of Mother Teresa, some in color but many in black-and-white, as she crisscrossed the world, opening new Missionaries of Charity communities in far-flung countries and speaking before attentive audiences.
Not everything in the Mother Teresa Collection is tucked away in dark temperature-controlled rooms at the University. A sampling of some of the items was put on display at the university’s student center prior to the canonization.
Scholars are welcome to view and study the materials. MacDonald said some of the visitors have been high school students working on class projects.
"This is one way to make history come alive for them," he said.
Copyright © 2022 Catholic News Service, Inc. All rights reserved. Linking is encouraged, but republishing or redistributing, including by framing or similar means, without the publisher's prior written permission is prohibited.