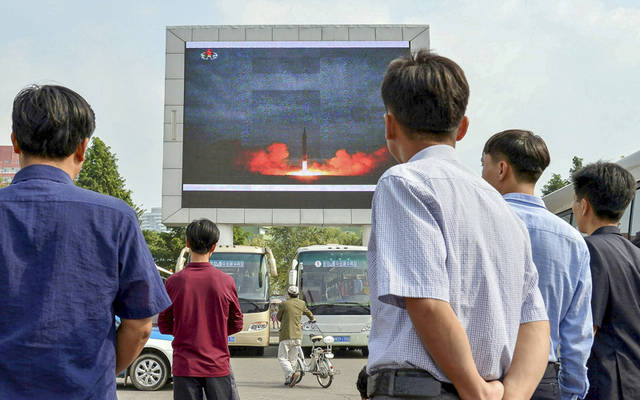 While advocating in the early 1980s for what is today known as the consistent ethic of life, the late Cardinal Joseph Bernardin of Chicago rated nuclear warfare — along with such issues as abortion and capital punishment — as a major moral concern for the Roman Catholic Church.

Catholic bishops are again speaking out in 2017, as tensions mount over a potential nuclear conflict between the United States and North Korea.

“Even a limited nuclear exchange would have devastating consequences for people and the planet. Tragically, human error or miscalculation could lead to a humanitarian catastrophe,” bishops warned in a portion of the statement “Nuclear Disarmament: Seeking Human Security.” The document, which calls for the complete elimination of nuclear weapons, was jointly released July 6 by U.S. and European bishops.

The bishops’ cautionary tone stands in contrast to ongoing threats exchanged by North Korean leader Kim Jong-un and President Donald Trump, furthering the specter of the world’s first nuclear attack of any sort in 72 years.

People in the pews, such as Jennifer Joseph and Inwon Lee, are concerned as well.

“I agree with the church. Nuclear warfare already is dangerous, and the Catholic Church obviously has lived through nuclear war and seen the nuclear arms buildup,” said Joseph, 19, a University of Rochester sophomore who belongs to the college’s Newman Community. “I know the Catholic Church is a big advocate of peace, and they want to do everything they can to avoid war.”

Nuclear war is “definitely something against God’s will,” observed Lee.

“My point of view is, I hope that God takes care of (the threat) and never lets it go out of control,” added Lee, a Cornell University senior and member of the Cornell Catholic Community.

Lee, who will turn 26 on Oct. 8, is a native of Busan, South Korea. His country is an ally of the United States and also a potential target for a nuclear attack from the communist North Korean regime.

These young people are not alone in their concern about atomic warfare. On July 7, more than 120 United Nations members adopted a treaty agreeing to ban the development of nuclear weapons. Pope Francis, in a March 2017 letter to the U.N. in advance of its treaty discussions, had noted “the catastrophic humanitarian and environmental consequences that would follow from any use of nuclear weapons” and also asserted that maintaining a nuclear arsenal serves as a “waste of resources” that could better be put toward more charitable efforts such as easing poverty.

However, all nine nations that are known to possess such weapons — the U.S. and North Korea along with Russia, Britain, China, France, India, Pakistan and Israel — boycotted the U.N. conference. North Korea went on to conduct its sixth and most powerful nuclear test to date Sept. 3, claiming it has developed a hydrogen bomb several times more potent than the two U.S.-launched atomic bombs that ravaged the Japanese cities of Hiroshima and Nagasaki in 1945.

North Korea also claims that it has missiles capable of reaching the U.S. mainland, and that bombs can be mounted on them. On Sept. 15 the Asian nation fired a ballistic missile over Japan, four days after the U.N. Security Council announced sanctions against Kim’s regime. During a Sept. 19 speech to the United Nations, Trump subsequently warned that the U.S. would “totally destroy” North Korea if the latter country does not curtail its nuclear efforts.

Even though the U.S.-North Korea struggle has occupied national headlines for months, Joseph and Lee said the issue hasn’t generated major concern among their peers.

Joseph said the topic is discussed in her major, international studies, but otherwise a lot of people she knows “really don’t take it seriously.”

Lee, a biological engineering major at Cornell, said he had grown accustomed to hostility from North Korea back in his homeland, as the regime has been conducting nuclear tests since 2006. However, he’s paying more acute attention in response to accelerated threats in recent months.

Although Joseph would like to see more concern about the growing U.S.-North Korea crisis, she ventured that many folks may sidestep the topic because the prospect of nuclear war is so disconcerting.

“It’s just something that scares people, I guess, it’s to a point where nobody wants to think about it,” said Joseph, a native of Modesto, Calif.

“It boggles the mind how bad things could be if one nuclear weapon got exploded. It’s probably a little ‘ostrich head in the sand’ because it’s so hard and difficult to imagine what would happen. And also because people feel so helpless,” agreed Laurie Konwinski, who serves as justice-and-peace director for Catholic Charities of Tompkins/Tioga.

Mind-boggling would be an apt description of the only previous nuclear strikes in world history. They occurred on Aug. 6 and 9, 1945, when the U.S. bombed Hiroshima and Nagasaki, respectively. The attacks effectively brought an end to World War II but caused a combined death toll estimated as high at 200,000 as well as severe health consequences for those who survived.

Yet most people alive today don’t remember those attacks and thus might react more strongly to more familiar forms of violence, such as terrorist attacks, Konwinski pointed out.

“It’s so beyond imagining that there could be a nuclear weapon detonated,” she said. “It seems so remote; it’s so far removed we can’t even fathom that.”

However, Joseph said the death and destruction caused by nuclear bombs in 1945 cannot be denied, and any country considering using them should seriously consider the human-rights aspect of such warfare.

“Are we willing to use these weapons of mass destruction against innocent civilians? It’s really scary,” she said.