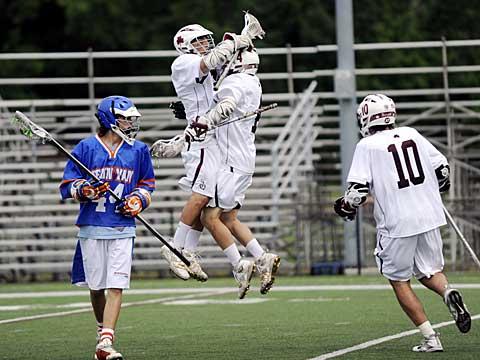 Aquinas lacrosse players Mike Messina (left) and Brendan Hall leap into the air to celebrate a goal during their 16-9 victory over Penn Yan in the Section 5 Class C championship game June 4.

Aquinas Institute won its first-ever Section 5 Class C lacrosse championship with a 16-9 victory over Penn Yan in the final held June 4. The Little Irish then won 14-11 over Silver Creek of Section 6 in state Class C quarterfinal play on June 8, but their season was ended in the state semifinals by Corning East of Section 4, 7-6, on June 10. AQ posted a final record of 17-4.

McQuaid Jesuit’s baseball team captured the Section 5 Class AA crown by defeating Webster Thomas, 4-1, on June 3. The Knights then won their state qualifier over Penfield by a 7-5 count on June 5, followed by a 3-1 state Class AA quarterfinal win over Clarence of Section 6 on June 7. McQuaid bowed out in the state semifinals, falling 8-3 to Guilderland of Section 2 on June 12. The Knights’ final record was 20-6.

Geneva DeSales baseball earned the Section 5 Class D championship with a 7-3 win over Lima Christian on June 4. The Saints then lost 17-2 to Bolivar-Richburg in state Class D qualifier play on June 5, ending their season with a 13-10 record.

Also reaching sectional finals were two girls’ softball teams, Bishop Kearney and Geneva DeSales. A noteworthy softball season was turned in as well by Elmira Notre Dame which, despite not reaching its sectional final, had a standout year with a 20-2 record.

The Little Irish cruised to an 8-2 halftime lead in their sectional title win over Penn Yan. The Mustangs crept to within 12-9 but could get no closer. Leading the Little Irish was Austin Gorman, who scored four goals. Aquinas was the No. 1 seed and Penn Yan, which had won 12 straight previous sectional titles, was seeded second.

AQ went on to a victory over Silver Creek in state quarterfinal play by scoring the game’s final three goals to break an 11-11 tie. That win put the Irish into the state semifinals, where they lost a one-goal heartbreaker to Corning East despite holding a 44-10 edge in shots.

The Knights were seeded No. 3 in Section 5 Class AA and Webster Thomas was No. 4. McQuaid was led by the pitching of Nate Harris, who threw a four-hitter. They erased a 1-0 deficit by scoring three runs in the fifth inning.

McQuaid went eight innings to get its state-qualifier win over Penfield as Rob Macko singled in Chad Urlaub with the go-ahead run. In the state-quarterfinal win over Clarence, Steve Stoklosa threw five shutout innings for the victory and the Knights broke a scoreless tie with three runs in the sixth.

The Knights’ season finally ended with their five-run loss to Guilderland despite two hits and one RBI each from Urlaub and Pat Kazley.

The Saints were only seeded fifth in Section 5 Class D, but proved themselves the class of that division with their title-game win over No. 7 Lima Christian. Ben Maher led the victory by pitching a five-hitter and recording five strikeouts.

DeSales had reached the final by defeating No. 12 Scio and No. 4 Friendship, then upending top-seeded Northstar Christian Academy in the semifinals.

The Saints were overwhelmed by Bolivar-Richburg in the Class D state qualifier, surrendering nine runs in the second inning and five more in the fourth.

Bishop Kearney softball, seeded fourth in Section 5 Class B2, reached the final with a 6-1 win over top-seeded Wayland-Cohocton on June 1 as Betsy Clark pitched a two-hitter and recorded 11 strikeouts. However, Kearney’s season was stopped with a 7-3 loss to No. 2 Mynderse Academy in the title game on June 3 despite two hits each from Clark and Jessica Filipello. BK’s final record was 12-10.

DeSales softball, seeded No. 3 in Section 5 Class D, scored a 7-4 semifinal victory over No. 2 Whitesville on June 1 as Anna Liberatore and Emily Roulan had three hits each. The Saints were eliminated in the final on June 3 by top-seeded Northstar Christian Academy, 6-3, surrendering all of their runs in the fifth inning. DeSales finished up with a 13-9 record.

Elmira Notre Dame girls’ softball was dominant throughout the regular season, earning the No. 1 seed in the Section 4 Class C tournament. But the Crusaders were upended in the semifinal round by No. 4 Greene, 1-0, on June 3. Olivia May pitched a four-hitter and struck out 16.