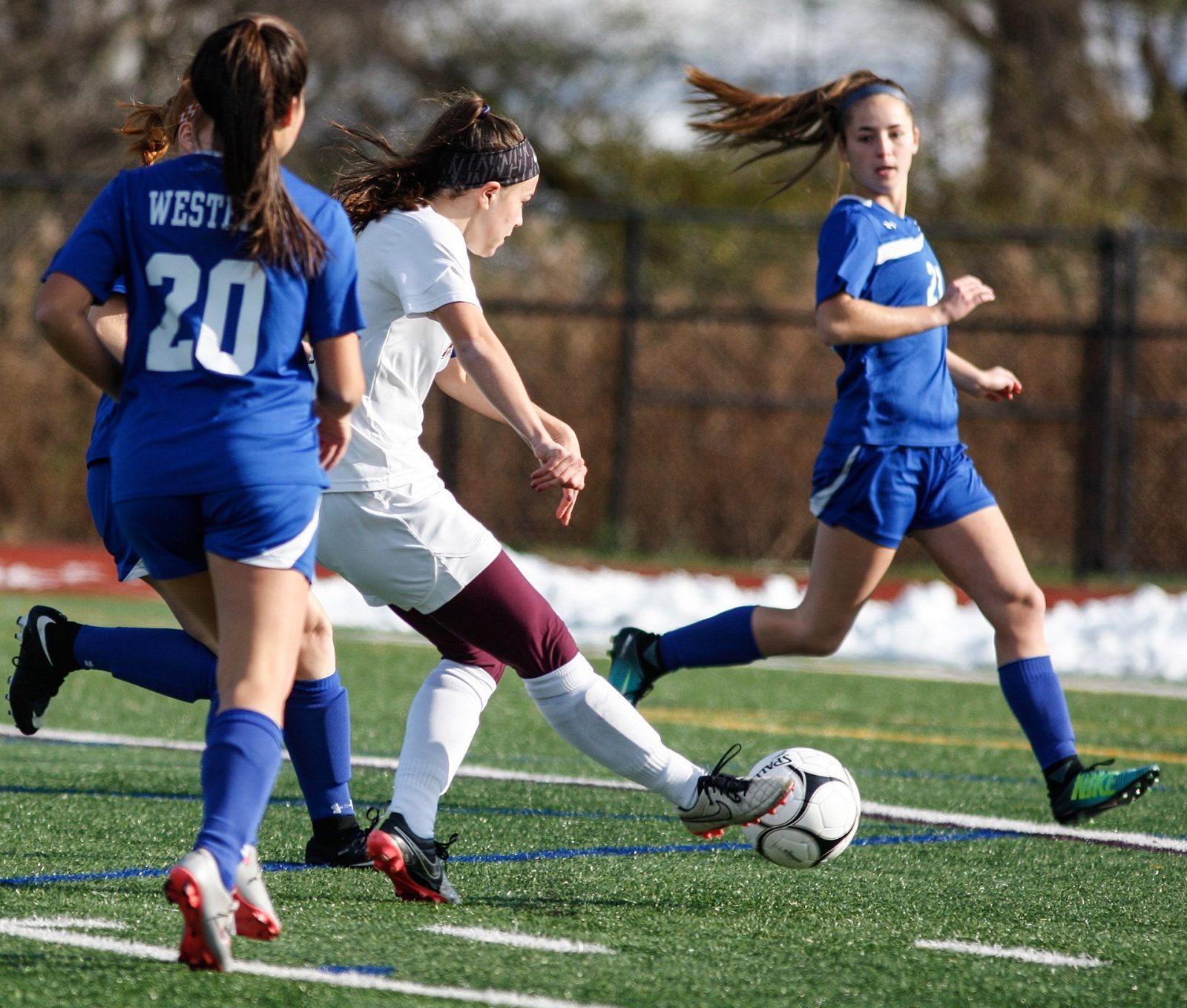 Aquinas Institute's Alana Piano (1) puts a shot on goal to score against Westhill in the first half of the NYSPHSAA Class B Championship match Nov. 12 in Cortland. After playing two 10-minute overtimes and two five-minute sudden victory overtimes, the match ended in a 2-2 draw and both teams were named Class B cochampions. (Courier photo by John Haeger)

Winning a sectional title is a difficult enough feat. To also bring home a state trophy is, with very few exceptions, a once-in-a-lifetime achievement.

And yet, that’s what happened this fall at three Catholic high schools in the diocese.

For McQuaid Jesuit, the boys’ soccer team not only won Section 5 and state championships, but did so by posting a perfect 22-0 record. The Knights closed out their dream season in style with a 6-0 rout of Half Hollow Hills West in the state Class AA final Nov. 12.

For Aquinas Institute, the girls’ soccer squad earned a Section 5 crown and kept its momentum going into the state final, where the Little Irish came away with a 2-2 tie against Syracuse Westhill to claim the state Class B cochampionship Nov. 12.

For Our Lady of Mercy, sophomore Julia Andreach won a Section 5 championship and went on to capture the state title Oct. 30, becoming the first girls’ tennis player from Section 5 — in either singles or doubles — to ever win states.

After surviving four straight one-goal decisions prior to the state final, the Knights poured it on in their title matchup against Half Hollow Hills West of Section 11.

The surge was led by two goals each from Dominic Duncan and Adriano Margiotta, with single goals coming from Justin LaFountain and Dan Malloy while goaltender Tommy Gallina picked up his third straight shutout at states. McQuaid had reached the final by winning 1-0 over Clarence of Section 6 in quarterfinal play Nov. 4, and 1-0 over Ithaca of Section 4 in the semifinals Nov. 11.

Preceding the Knights’ state-title run was a 2-1 victory over second-seeded Hilton in the Section 5 Class AA final Oct. 31. Earlier sectional wins for top-seeded McQuaid were 6-0 over No. 8 Gates-Chili in the quarterfinals Oct. 20 and 1-0 over No. 5 Webster Thomas in semifinal action Oct. 26.

The state final saw the Little Irish get a first-half goal from Alana Piano and a second-half score from Emily Cook to end regulation play in a 2-2 deadlock. Neither the Irish nor Westhill of Section 3 could score during four overtime periods, and so they settled for a cochampionship.

Aquinas had reached the state final by winning 2-0 over Newfane of Section 6 in quarterfinal play Nov. 3, and 3-0 over Babylon of Section 11 in the semifinals Nov. 11.

Andreach, seeded third in the state tournament, defeated top seed Rachel Arbitman of Hewlett (Section 8) 6-4, 6-2 in the title match as she made history for herself as well as Section 5.

One day before the state final, Andreach cruised to a 6-0, 6-0 semifinal win over second-seeded Caitlyn Ferrante of Yorktown (Section 1), who had bested Andreach in the 2016 state final. Earlier on Oct. 29, Andreach won 6-0, 6-0 in quarterfinal play over fellow Section 5 competitor and No. 6 seed Sarah Bodewes of Pittsford Mendon.

Also this fall, Andreach won a Section 5 title by defeating Mercy teammate Taylor Loiacono in the Class A final Oct. 16.

The No. 3-seeded Crusaders gained their third straight sectional title with a 2-1 win over Class C top seed Trumansburg Oct. 28 behind goals from Jillian Perrault and Laurel Vargas. Earlier in sectionals, the Crusaders won 5-0 over No. 6 Newark Valley in quarterfinal play Oct. 20 and 6-2 over No. 2 Unadilla Valley Oct. 24 in the semifinals.

Notre Dame then won 2-1 over Little Falls of Section 3 in state Class C quarterfinal play Nov. 3 before falling, 4-2 in overtime, to Stillwater of Section 2 in the semifinals Nov. 11. ND’s final record was 14-4-1.

The Little Irish, seeded third in Class AA, earned the sectional championship with a 20-14 win over No. 1 Pittsford Nov. 4 as T.J. Jones scored twice and James Jones got AQ’s other touchdown.

The Little Irish were stopped by Lancaster of Section 6, 9-0, in the state Class AA quarterfinal round Nov. 11. Aquinas’ final record was 9-2.

BK, seeded fourth in Class C2, captured sectionals with a 1-0 win over No. 6 Geneseo in the final Oct. 28 as TJ Tytler got a first-half goal and the Kings recorded their third straight postseason shutout. Previous sectional wins were 3-0 over No. 5 Campbell-Savona Oct. 21 in the quarterfinals and 4-0 over No. 9 Red Creek Oct. 25 in the semifinals.

BK went on to fall 1-0 in overtime to Byron-Bergen/Elba in state Class C qualifier play Nov. 1. The Kings’ final record was 13-6-1.

Notre Dame boys’ soccer made the Section 4 Class B final as the No. 1 seed. The Crusaders won 1-0 over No. 4 Chenango Forks in semifinal play Oct. 25 as Mitchell Vargas scored a second-half goal on Gavin Harrington’s assist, with goaltender Caleb Colucci making six saves to earn the shutout. ND went on to fall to second-seeded Oneonta, 4-2, in the title game Oct. 28 to finish with a 14-2-1 record.

Mercy’s Anika Fischer shot a 94 at the Section 5 girls’ golf championships Oct. 10, placing ninth and claiming the final spot for the state tournament to be held this coming spring.

McQuaid’s Abel Hagos placed fourth at the Section 5 Class A boys’ cross-country championships Nov. 4 and then took 14th at the state Class A meet Nov. 11.

Mercy’s Paige Eaton had her team’s top finish at the Section 5 Class B girls’ swimming meet Nov. 4, placing second in the 100 breaststroke.