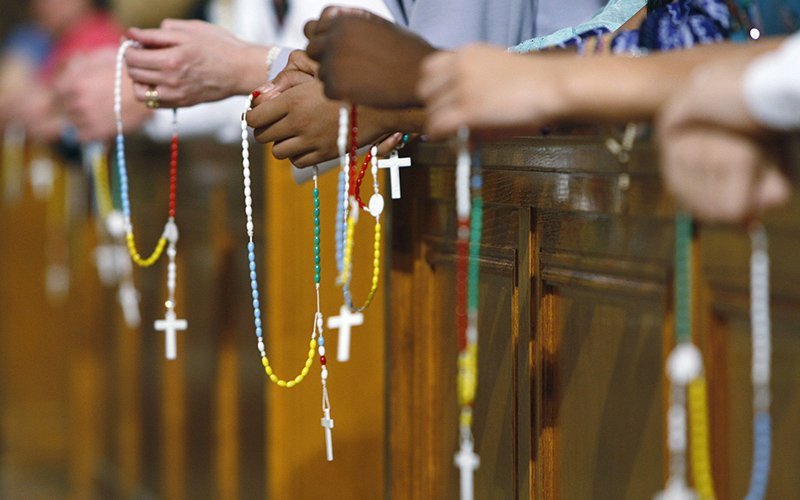 People pray the rosary in this illustration photo. (CNS photo by Bob Roller)

WASHINGTON (CNS) — The leaders of three U.S. Catholic organizations hope to have a million people pray and promote the daily rosary during the month of October for “the end to legal abortion in America and an outpouring of support for expectant mothers,” according to their announcement on the joint effort.

In the U.S. Catholic Church, October is observed as Respect Life Month and the first Sunday of the month is Respect Life Sunday, which this year is Oct. 3.

In addition, the month of October each year is dedicated to the rosary. The feast of Our Lady of the Rosary is celebrated Oct. 7.

“With the Supreme Court of the United States taking up the Dobbs case in December that could lead to overturning Roe v. Wade, the justices will need the grace of wisdom and courage to confront the issues honestly,” said the announcement from Warsaw, Father Hoffman and Busch.

On Dec. 1, the Supreme Court will hear oral arguments in an appeal from Mississippi to keep its ban on abortions after 15 weeks of pregnancy, and supporters of the law are urging the court to reexamine its previous abortion rulings, including 1973’s Roe v. Wade ruling legalizing abortion nationwide.

The CEOs said they hope many other Catholic organizations “will join this effort by praying and promoting the daily rosary in October for this intention, and thus mobilize millions of Americans in prayer.”

This year’s Respect Life Month, promoted by the U.S. Conference of Catholic Bishops, highlights the example of St. Joseph as part of the Year of St. Joseph declared by Pope Francis.

“As the faithful protector of both Jesus and Mary,” St. Joseph is “a profound reminder of our own call to welcome, safeguard and defend God’s precious gift of human life,” said Archbishop Joseph F. Naumann of Kansas City, Kansas, who is chairman of the USCCB’s Committee on Pro-Life Activities.

Editor’s Note: For more information on the effort to have a million people pray the rosary, go to EWTN.com, RelevantRadio.com, and Napa-Institute.org. Various resources for celebrating Respect for Life Month can be found online at https://www.respectlife.org/respect-life-month.