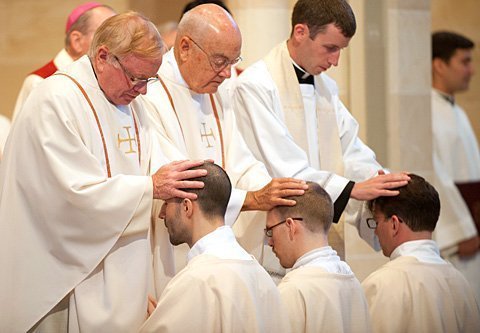 Priests line up to lay their hands on the heads of Fathers David Tedesche (from left), Peter Mottola and Michael Costik June 22 during the priest ordination Mass at Rochester's Sacred Heart Cathedral.

ROCHESTER — Although it was a Mass lasting some two hours, Bishop Robert J. Cunningham observed that the celebration’s essence could be boiled down to a few words.

In his homily Bishop Cunningham cited the day’s Gospel passage, John 21:15-17, in which Jesus asks Peter three times if he loves him and exhorts Peter to feed his lambs and sheep. Similarly, Bishop Cunningham told Fathers Michael Costik, Peter Mottola and David Tedesche that their primary mission as priests is to love God and tend to their flocks.

Bishop Cunningham, the diocese’s apostolic administrator, ordained Fathers Costik, Mottola and Tedesche on the morning of June 22 at Sacred Heart Cathedral. The Mass took place before a large congregation that twice burst into prolonged applause for the three young men. Also adding to the uplifting spirit was music from the Diocesan Festival Choir.

As a sea of well-wishers closed in on them in the cathedral’s narthex after Mass, the new priests were in high spirits.

"I’m overwhelmed and joyful at everything that happened today," remarked Father Mottola, a native of New Jersey.

"I’m grateful to God for this gift of priesthood for myself, but mostly grateful for the church," added Father Tedesche, from St. Mary of the Lake in Ontario, acknowledging that he and his classmates were part of the largest diocesan ordination class in 15 years.

All three men came to their priestly ministries from varied backgrounds.

Father Costik’s professional career has included stints as an operatic tenor, composer, iconographer and drama teacher. He also was the last diocesan seminarian to be ordained from the American College in Louvain, Belgium, which closed in 2011. Father Costik, 39, will return to Theological College at Catholic University of America in Washington, D.C. for one year to finish up priestly studies.

Father Mottola, 27, who graduated from Rochester Institute of Technology in 2007 with a bachelor’s degree in information technology, converted to the Catholic faith while in college. He will soon begin a parish assignment in the Rochester Diocese that has not yet been announced.

Father Tedesche, 36, is a former English teacher. He is currently studying for his license in biblical theology at the Pontifical Gregorian University in Rome and, like Father Costik, will spend one more year completing studies before beginning ministry in the Rochester Diocese.

Bishop Cunningham built his homily around the sacred importance of their vocation, reminding the new priests to continually nourish their calling through prayer, meditation and celebration of the Eucharist. He also exhorted them to model their priesthood through their daily actions: “You cannot give what you do not have in your heart and your daily life.”

In addition, Bishop Cunningham encouraged Fathers Costik, Mottola and Tedesche to seek out their brother priests, calling the body of priests "a unique sacramental brotherhood.” He added that although only three people were being ordained that morning, everyone in attendance played a role in the day’s proceedings as well: “All of us are charged by Jesus Christ to support the new priests with prayers, companionship and love.”

This marked the first time in more than three decades that a local priest ordination was conducted by somebody other than Bishop Emeritus Matthew H. Clark. However, Bishop Clark — whose retirement took effect in September 2012 — was on hand as a concelebrant and immediately followed Bishop Cunningham in extending Fathers Costik, Mottola and Tedesche the kiss of peace following the rite of ordination.

That part of the Mass also featured several dozen priests laying their hands on the trio one by one. Father Tedesche called the ritual a personal highlight for him, whereas the litany of the saints stood out for Father Mottola as he felt he was being blessed by "all of the people here and in heaven praying for us."

Meanwhile, Father Costik was so overcome by the day’s events that his attempt at summing it all up only resulted in a long pause.

"There are no words for it," he stated.