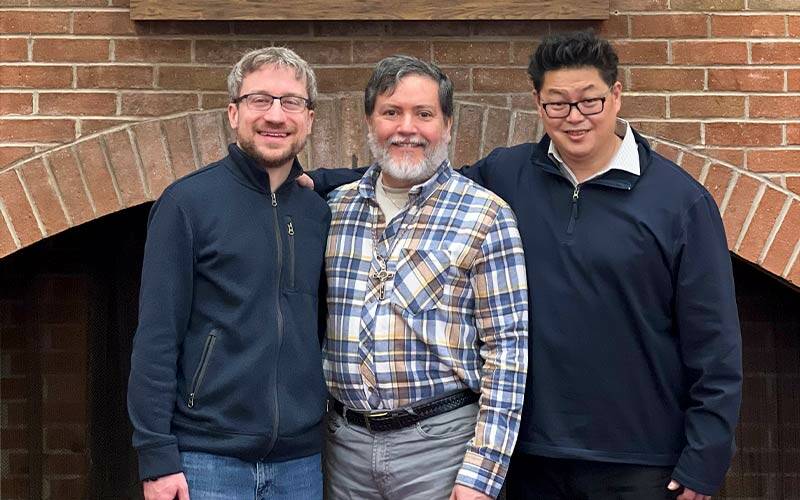 They will gather for prayer again May 21, but on that Saturday, Bishop Salvatore R. Matano will ordain de la Fuente, DeLucenay and Rivera to the permanent diaconate during a 10 a.m. Mass at Rochester’s Sacred Heart Cathedral.

The three men also have been studying together since 2017 at St. Bernard’s School of Theology and Ministry in Pittsford and will receive their master’s degrees in pastoral studies May 6.

‘I will be different’ – R. Gerard de la Fuente

Pinpointing the moment he began discerning a call to the diaconate is difficult, de la Fuente said. Deacons at his then-parish, Fairport’s Church of the Assumption, had mentioned the possibility to him several years ago, but de la Fuente’s kids were quite young then, and the timing didn’t feel right. Yet he and his wife, Margarita (Maita), continued to pray about the idea.

“We’ve always had the love of serving, and it was just figuring out what God wanted for us,” de la Fuente explained. “So I think it was a bit of both people (outside the family saying I should consider the diaconate) and us praying, and then finally surrendering and saying, “OK, God, you win!”

An immigrant to the United States from the Philippines with his family in 1984, de la Fuente, 49, grew up in San Francisco and Los Angeles before moving to New Jersey. There, he attended Ramapo College of New Jersey, earning a degree in business. He met his wife during a retreat, and the couple was married in 1997. In 2003, they moved to Rochester, his wife’s hometown, to raise their family.

He currently works remotely as director of customer engineering services for Luma Health, which is based on the West Coast.

During diaconal formation, de la Fuente served field assignments at Fairport Baptist Home and Pittsford’s St. Louis Church, where he and his family are parishioners.

There, he said, “I just became more aware of the operations of a parish,” having assisted with the parish’s votive candles and with the marriage-preparation program.

The de la Fuentes, who this year will celebrate 25 years of marriage, have five children: twins Krista and Jonathan, 24; Elisa, 22; Alexandra, 21; and Christian, 19.

With just a few weeks until ordination day, de la Fuente said he is excited.

“There is not enough words to put into it,” he said of his imminent ordination. “I will be different.”

DeLucenay is about to become the youngest permanent deacon in the diocese, a gift he said he hopes will make him more approachable to young families.

DeLucenay, who will be 37 in June, is a graduate of Rochester’s Holy Cross School and Aquinas Institute. He attended St. John Fisher College, where he received a bachelor of science in biology and a doctorate in pharmacy.

A board-certified ambulatory-care pharmacist, DeLucenay is an associate professor of pharmacy practice at his alma mater — the Wegmans School of Pharmacy at St. John Fisher College.

He said he really hadn’t given much thought to the diaconate until 2016, the year before he began formation following a suggestion from Deacon Tom Jewell, then-campus minister at Fisher, that he consider becoming a deacon.

“I just heard God speaking to me through other people, through my family and then just throughout my circles of influence, and I started getting the affirmation that this is something I should look into,” DeLucenay explained.

DeLucenay and his wife, Mary, have a daughter, Sarah, 4, who attends preschool at Holy Cross. The DeLucenays attend Mass at the Hermance Family Chapel of St. Basil the Great at St. John Fisher.

Asked what he’s looking forward to in his diaconal ministry, DeLucenay said he just wants to be a “humble servant of God.”

Rivera said the seeds for his vocation to the diaconate were planted when he was a young kid watching his father, José A. Rivera, being ordained a Catholic deacon. But he didn’t act on the call until he had a reconversion to the faith later in life and experienced a call to service.

“I’ve always enjoyed serving and helping other people, so the call had been there all long,” he recalled. “But it wasn’t an instant, ‘I’m called to be a deacon.’ It was more of a growing discernment.”

A native of Puerto Rico, Rivera, 52, came to the U.S. to attend the University of South Carolina — Columbia, where he earned a degree in electrical engineering. Upon graduation, he relocated to Rochester to work for Eastman Kodak Co.

In 2009, Rivera went back to school to pursue a master’s degree in social work through a joint program with Nazareth College and SUNY Brockport. After his 2013 graduation, he continued working at Kodak until 2017, when Deacon James Steiger, a judicial assistant in the Diocese of Rochester’s Tribunal, approached Rivera about volunteering in that office. He went on to become a Tribunal employee in December of that year.

In his field assignments, Rivera ministered to residents at St. Ann’s Home and to parishioners at St. Leo Church in Hilton, where he helped organize a youth retreat. Rivera and his family are active members at St. Leo, where his wife, Rita (Nina) is the part-time Christian-formation coordinator.

The Riveras, who were recognized as New York state Knights of Columbus Family of the Year in 2017, have four children: Carlos, 26; Victoria, 23; Ana, 20; and Antonio, 15. Rivera said many family members, including his parents who live in Florida, will be attending the ordination Mass.

“I’m looking forward to continuing to grow in service,” he said of his new ministry. “I just let God lead and make myself present in what he calls (me to do).”