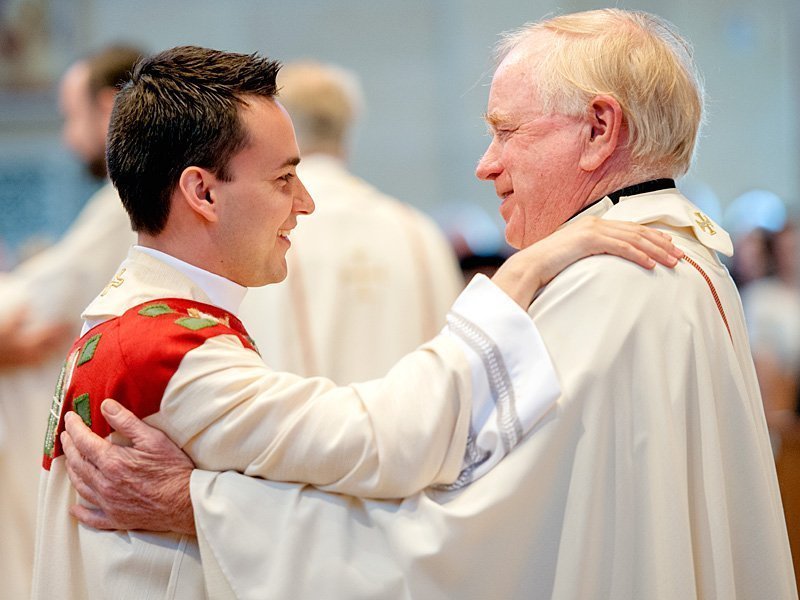 The three men who will be ordained as priests next month said they have been blessed in this past year of service as transitional deacons.

"I feel like the role of the deacon has helped me to play a larger role in … the lives of people," said Deacon Miller, who was finishing his studies in April at Theological College in Washington D.C.

Before returning to school, he spent the summer of 2015 as a newly ordained deacon at Christ the Redeemer Parish in Elmira. He added that he also assisted at a parish in the Diocese of Arlington during his final year at the seminary.

"Being able to serve as an ordained member of the church, there’s a great grace that comes with that," said Deacon Miller, 30. "I experienced that grace in my ability to do a homily, for instance. … There’s something about preaching God’s word in the context of the Mass. For me, it’s been a real blessing, preaching and (presiding at) baptisms have also been great."

Although he was raised as a Catholic in Springville, N.Y., Deacon Miller said he experienced a conversion while studying at St. John Fisher College. He felt a call to the priesthood during a retreat in his sophomore year, but he didn’t act on that call for more than a year after graduation.

As he nears ordination day when he will be surrounded by family and friends, Deacon Miller said he feels a mix of joy, anticipation and anxiety about the unknown.

"My whole life is in transition right now," he said. "I did experience a real change of identity becoming a deacon. You’re not just wearing a collar; you’re living the ministry of Christ … assisting at Mass, helping the sick. There will be even greater change of identity as a priest, as we are incorporated into ministry in the service of the church, in the person of Christ the head."

Deacon Ramírez said his work as a transitional deacon taught him to see the face of Christ in every person he encounters.

"If I am to serve in God’s image, I must also see his face in every person in need, or who is hungry, in those who serve at a parish, in the orphan, in my fellow seminarians … ultimately, in every person with whom I interact day by day," he wrote in an e-mail to the Catholic Courier. "That is very important because I am here to serve Christ, who is present in every member of his church. Every baptized person, but especially a priest, must recognize the face of Jesus in his neighbor."

The call to the priesthood came at an early age for Deacon Ramírez, who began seminary studies at the age of 13 in his native Medellin, Colombia. During the course of his formation process, he joined Sergio Chávez as the first of two seminarians to enter into a collaboration between the Rochester and Medellin dioceses. Father Chávez was ordained a priest of the Rochester Diocese in 2014.

Although being away from family and friends in his native country and learning a new language were challenging, he said he has grown to appreciate his new home. As his ordination nears, Deacon Ramírez, 35, said he is feeling great joy and some nerves. He said he also is grateful that his brothers along with other family members will be present.

"God has put me in Rochester to serve his church," he said. "As St. Paul said in Galatians 3:28: ‘There is neither Jew nor Greek, neither slave nor free person, male or female for you are all in one in Christ Jesus.” In the same vein, I say, there are no Americans, nor Puerto Ricans, nor Mexicans, nor Colombians … there is one heart of Christ."

Deacon Viloria said he also has grown to love working with the Anglo and Hispanic communities in the Rochester Diocese. Having completed his fourth year at Theological College in 2015, he has spent the last year working at Our Lady of Peace Parish in Geneva.

"I’m the one who is getting enriched … being able to communicate myself with Anglo and Spanish (communities)," he said. "But to be able to be with the Spanish-speaking community, it’s not only language, it’s culture. That connection we have. I feel with them that I am home. At the same time, when I’m with the Anglo community, this is home too. I feel like I have two homes in two different dimensions, like a coin between two sides."

Deacon Viloria, 34, had considered the priesthood since he was a child in his native Colombia. He felt the call again when he met another priest in his later teen years, but his parents couldn’t afford to send him to seminary. A local bishop later connected him with a benefactor who paid for him to attend seminary and obtain his theology degree from Catholic University in Medellin.

He moved to Rochester in 2012 to complete seminary formation and began his pastoral year at Rochester’s Peace of Christ Parish later that same year. Friends from the parishes where he has served will be with him for his ordination, as his family cannot be in attendance, he said.

"I’m very excited," he said about the upcoming ordination. "At the same time I’m reflecting on all the wonderful things the Lord has done with me. I can’t believe he finally wants to give me this wonderful gift. You never feel you’re worthy to receive it. The fact that he’s … calling you into the church and you said yes, it’s just amazing. I feel so blessed."