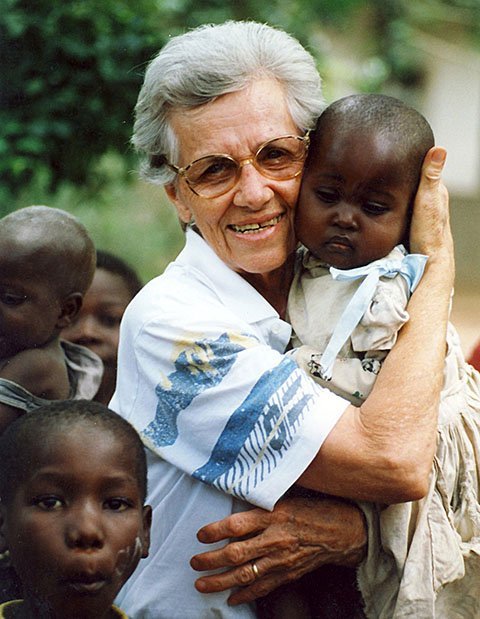 Sister Olga Raschietti, 82, pictured in an updated photo, is one of three Xaverian Missionary Sisters of Mary who were murdered in two separate attacks at their residence in Burundi. The three nuns had been working in Burundi, helping the poor and the sick, the past seven years, Vatican Radio reported.

VATICAN CITY (CNS) — Pope Francis mourned the deaths of three Xaverian Missionary Sisters of Mary, who were murdered in two separate attacks in their residence in Burundi.

Sister Lucia Pulici, 75, and Sister Olga Raschietti, 82, were found dead Sept. 7 in their mission residence in Bujumbura, the capital of the southeast African nation. Sister Bernadetta Bogianni, 79, who had found the bodies, was killed the next night.

In telegrams sent to Archbishop Evariste Ngoyagoye of Bujumbura and Sister Ines Frizza superior general of the Xaverian Missionary Sister of Mary, the pope expressed his sadness concerning the "tragic deaths" of these "faithful and devout nuns."

The messages, sent on behalf of the pope by Cardinal Pietro Parolin, Vatican secretary of state, said the pope hoped that "the blood they have shed may become the seed of hope to build true fraternity between peoples."

Xaverian Missionary Father Mario Pulcini, superior of the Xaverian Missionaries in Burundi, told MISNA, the missionary news service, that he had gone to the mission house Sept. 7 after he and Sister Boggiani had been unable to reach Sisters Pulici and Raschietti by telephone all of that day.

"I was in front of the main door with the idea of forcing it open when it opened and I saw Bernadetta there very upset. She had found a side service entrance open and, once she entered, found the lifeless bodies of Sisters Olga and Lucia," he said.

They alerted government, military, judicial and religious authorities, the priest said, and an investigation was begun.

Despite the murders, the sisters decided to spend the night in their home. However, they phoned Father Pulcini during the night of Sept. 8, afraid that "the aggressor was in the home." When the priest arrived, he found Sister Bogianni had been killed, too.

There was no word yet on possible suspects or motives of the killings.

The three missionary sisters had been working in Burundi, helping the poor and the sick, the past seven years, Vatican Radio reported. Sister Bogianni had been a superior of the congregation for many years.

On Sept. 8, the mission house was "full of people who have come to mourn the nuns and express their solidarity," the radio said.