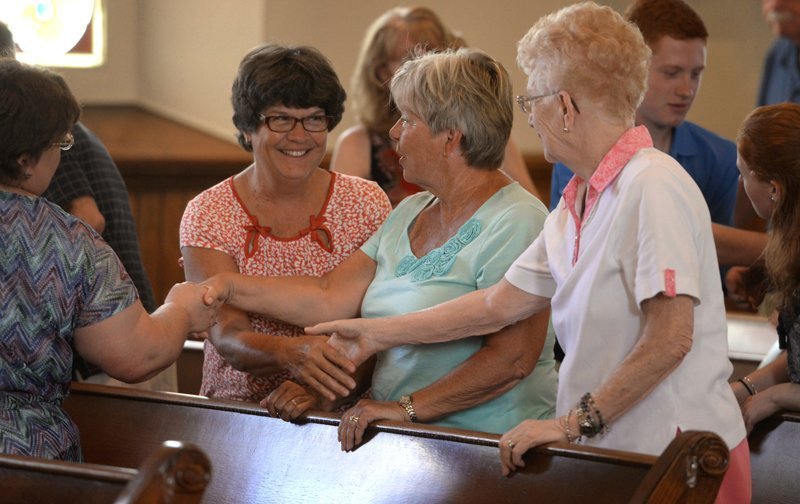 Parishioners shake hands during the offering of the sign of peace during Mass at Holy Cross Church in Ovid, July 24, 2016. As of July 1, Holy Cross merged with St. Francis Solanus Parish in Interlaken and St. James Parish in Trumansburg to form Mary, Mother of Mercy Parish.

Combining the three parishes into one took quite a bit of work, but was accomplished in a relatively short time, according to the new parish’s pastor, Father Bernard Maloney, OFM Cap.

Holy Cross and St. Francis, both located in southern Seneca County, had been clustered and sharing a pastor since 1994, but did not begin the process of forming a new cluster with St. James until late 2014. Three parishes now one

The Ovid-Interlaken cluster and the Trumansburg parish, which is located in northern Tompkins County, all had historically been staffed by Capuchin Franciscan pastors. When Father Bartholomew Minson, OFM Cap., pastor of Holy Cross and St. Francis, fell ill and resigned his post in the fall of 2014, Father Maloney, who had only been at St. James a few months, assumed pastoral care for the other parishes as well.

Bishop Salvatore R. Matano named Father Maloney pastor of all three parishes in July 2015. Just three months later, he directed the parishes to merge into a single parish by June 2016. According to Bishop Matano’s October 2015 letter to parishioners, the move was necessitated by declines in Mass attendance, financial resources, and participation in religious-education and sacramental-preparation programs.

"From October to June a lot of work was done," Father Maloney said, commending parishioners who served on the planning team that guided the parish through the merger process with the help of Karen Rinefierd, diocesan coordinator of leadership formation for parishes.

Previously each parish had retained its own identity and pastoral and finance councils while collaborating on parish ministries and programs. After receiving the bishop’s directive to merge, planning team members were instructed to help create a consolidated pastoral and finance councils as well as a shared parish office. Their first challenge, however, was responding to the bishop’s directive to cease holding weekend and weekday Masses at one of the three churches. Planning team members agonized over this decision for some time before asking the bishop if they could leave all three churches open but make significant reductions to the parish’s Mass schedule, recalled planning-team member Lee Anne Fox.

The bishop agreed to this compromise, and with much relief, the planning team began the arduous task of trimming three Masses from the churches’ combined weekend schedule and revising the remaining Mass times. Once team members were no longer pitted against each other in an attempt to defend their own churches from closure, they were able to work together and make the hard decisions necessary for the health of the new parish, Fox said. Team members knew that Holy Cross would only have one weekend Mass under the new schedule instead of its former three, and that a significant share of parishioners who worship there are elderly and do not drive at night. Thus, they made the decision to eliminate the church’s 5 p.m. Saturday Mass, since it would be difficult for older people to attend in the winter months, Fox explained. Instead, they opted for the Ovid church to host a Sunday-morning Mass in the hopes of retaining Holy Cross’ parishioners, including some who live closer to Waterloo, Seneca Falls or Geneva than they do to Trumansburg, Fox explained.

"That was a tough meeting," Fox said of the session at which the final Mass schedule was set. "We actually broke to walk into the church and think about it and pray about it. That was difficult, but change is always difficult."

The planning team chose the St. Francis campus in Interlaken as the site of the new parish office because it is centrally located and is just 10 minutes from both Ovid and Trumansburg, Father Maloney said. A number of parishioners from Trumansburg had never been to the Ovid or Interlaken churches and vice versa, so last spring the parish spread its Triduum liturgies among the three parishes in an effort to help parishioners become comfortable at all three churches, he added. And in February parishioners from all three churches came together for a dinner dance.

"It was an opportunity for people to come together," Father Maloney explained. "Let’s put all this detail that goes into the merger aside for the time being and just socialize."

For the most part, parishioners seem to be adjusting well to the new Mass schedule and their newfound unity, Father Maloney said. Mass attendance has been high, Fox agreed.

"Holy Cross and St. Francis had to order more missalettes because we ran out of them at Mass. It’s very nice to see the churches full when it’s not Christmas or Easter," she said.