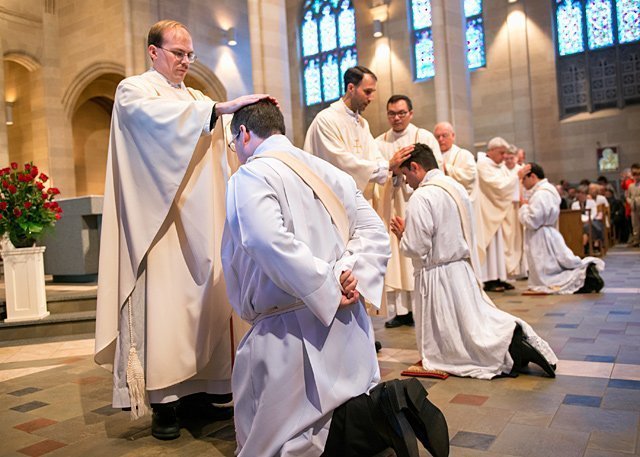 Diocesan priests line up to lay their hands on the heads of newly ordained priests during a June 3 priest ordination Mass at Rochester’s Sacred Heart Cathedral.

At approximately 10 a.m. on June 3, the sudden crash of a drum shook Sacred Heart Cathedral and was followed by blaring, majestic organ music.

Those booming sounds marked a dramatic start to the priestly ordination Mass — a fitting beginning when one considers the profundity of the occasion for Fathers Anthony Amato, Juan Benitez and Michael Merritt.

After many years of prayer and study, all three have become the newest priests of the Diocese of Rochester. They were ordained by Bishop Salvatore R. Matano before an overflow congregation as they formally committed the rest of their lives to service in Christ.

“May God who has begun the good work in you bring it to fulfillment,” Bishop Matano told each young man during the Rite of Ordination.

Father Merritt acknowledged the drama and emotion flowing through the cathedral during the two-and-a-half-hour event, calling the ordination “an incredible moment of grace for all of us.”

Father Merritt noted that while he was prostrating himself during the Litany of the Saints, he could feel the presence of God and the saints “to help me and all of us in our priestly ministry.” Lying prostrate also served as a strong memory for Father Benitez, who said he had the sense of “giving all your being to God” at that moment.

Father Benitez added that he was overcome with emotion several minutes later while taking part in the Eucharistic Prayer for the first time as a priest.

“I just remembered all the days I had in the past (preparing for the priesthood), and to come to this point — I started to cry,” he said.

For Father Amato, meanwhile, a profound occurrence at the ordination Mass was when Bishop Matano laid hands on his head and all the priests in attendance followed suit, one by one.

“It was a powerful moment of unity,” Father Amato remarked, saying he felt a strong connection to his fellow priests regardless of age or experience.

Father Amato added that he also was struck by Bishop Matano handing him his chalice and paten — “my tools of the trade,” he quipped — signifying that after many years of prayer and study, he is now qualified to celebrate Mass.

Just moments after the ordination liturgy ended, Fathers Amato, Benitez and Merritt returned to the altar area where they received long lines of family, friends and other well-wishers who knelt before the newly ordained priests to receive their blessings. Father Benitez said he was struck by the number of people who greeted him as Father — a title he isn’t accustomed to having directed toward him.

“You think, ‘Oh my God, it’s real,’” said Father Benitez, a native of Medellin, Colombia, whose mother, grandparents and brother all traveled from his home country to witness the ordination.

The newly ordained priests said they’re looking forward to getting on with living out their priestly vows. For Father Benitez, his first assignment from Bishop Matano will be as parochial vicar at Pittsford’s St. Louis Parish beginning in late June.

“I am hoping to serve the Diocese of Rochester for many more years because once you become a priest, you are a priest forever,” Father Benitez commented.

Father Merritt, a native of St. Benedict Parish in Canandaigua and East Bloomfield, will serve as parochial vicar at St. Francis and St. Clare Parish in Waterloo and Seneca Falls.

“It’s been a long journey culminating in today, and now it’s the beginning of a new journey,” Father Merritt said.

Meanwhile, Father Amato, a native of Our Mother of Sorrows Parish in Greece, said he’s looking forward to becoming parochial vicar at Blessed Trinity/St. Patrick parishes in Tioga County. He heads into that assignment with warm memories of the most significant day of his life up to this point.

“The joy and gratitude I have today — there is no way I could not be happy right now,” Father Amato stated.