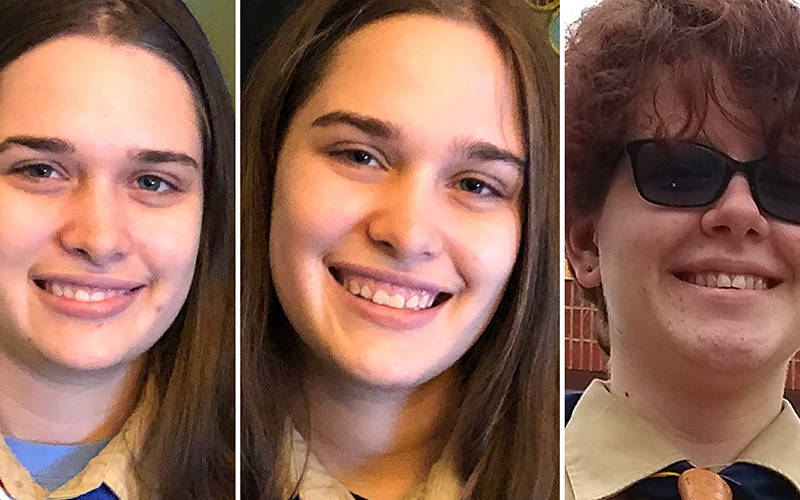 Mara Snyder, left, Rachel Snyder and Madeline “Maddie” Mullin, seen in this undated photo, are part of the inaugural group of young women to become Eagle Scouts in the Boy Scouts of America. The Snyder twins are members of St. Michael the Archangel in Glen Alen, Va., and Mullin belongs to the Cathedral of the Sacred Heart Parish in Richmond, Va. (CNS photo by Patrick Snyder/The Catholic Virginian)

RICHMOND, Va. (CNS) — Rachel and Mara Snyder, and Madeline “Maddie” Mullin are part of history, becoming part of the inaugural group of young women to become Eagle Scouts in the Boy Scouts of America.

The Snyders are identical twins who are first-year students at Virginia Commonwealth University and members of St. Michael the Archangel Parish in suburban Glen Allen. Maddie, their lifelong friend, is a home-schooled high school senior and member of the Cathedral of the Sacred Heart Parish in Richmond.

The trio credited their families and their faith for their accomplishment.

For the young women, the love of Scouting was planted early by their families. Mara and Rachel’s great grandfather was one of the country’s first Eagle Scouts. Their father, Patrick, followed in his footsteps.

Maddie was a member of Girl Scouts for five years but enjoyed tagging along on her younger brother’s Boy Scouts activities.

When the dream of female Eagle Scouts became more realistic, the family took a weekend camping trip to determine how they could start a troop in Richmond.

Maddie’s older sister, Anna, who had severe developmental delays, was diagnosed with leukemia shortly after the trip and died one month later. Her death served as a catalyst to create something lasting and good.

“We were devastated,” Maddie recalled. “As we were relearning how to live our lives without Anna, one bright spot that helped us focus on the future was girls in Scouting.”

Maddie reached out to Rachel and Mara and they got to work. St. Michael Parish supported the endeavor. They needed five girls to form a charter; they got six. Eventually the troop grew to 21.

Maddie’s father, John, became scoutmaster and her mother became an adult leader. Rachel and Mara’s father serves as an assistant scoutmaster. One important part of BSA is that the Scouts, not parents, lead the troop.

After signing up, the three young women started working toward becoming Eagle Scouts.

Mathematically speaking, it was possible for them to earn the rank — but just barely. They would have about two years to accomplish what normally takes much longer. For their father it took six years.

“Having siblings and close friends striving to achieve the same goals was above all one of the reasons why we were able to succeed,” Mara told The Catholic Virginian, Richmond’s diocesan newspaper.

Rachel and Mara are two of six children — all girls, ranging in age from 2 to 21. They and their 14-year-old sister, Elizabeth, are all in the same troop. Nine-year-old Therese is a Bear Scout.

Mara noted the challenges some girls may feel trying to become Eagle Scouts.

“There is a desire to prove that letting you try wasn’t a mistake, which is a personal pressure that I know a lot of the girls felt,” she said. “You simply had to be better than your male peers because if you failed, you would have a lot further to fall.”

A main requirement to become an Eagle Scout is a final project. A Scout must develop an idea, write a proposal, and complete the project, all while demonstrating the skills learned during the journey.

Mara is majoring in environmental studies and has had a passion for birds since age 9. She decided to make bird toys for a local parrot rescue program, through which she has been fostering birds for five years. She hopes to work as a wildlife rehabilitator.

Maddie’s project was inspired by her late sister. A robotics enthusiast, she used a 3D printer to create specialized luggage tag-style medical alert labels that can be attached to a wheelchair, stroller or car seat. She led a team that designed, printed and assembled the tags, and then ran a drive-through demonstration and distribution event, all while adhering to COVID-19 regulations.

Like her sister, Rachel focused her project on nature and birds, specifically chimney swifts, an endangered species in Virginia.

Because there is a flock of chimney swifts at the twins’ parish, Rachel designed, planned and built a 10-foot steel tower for the stubby birds in which they can safely build their nests. She wanted to raise local awareness that some animals species need help.

“You don’t need to travel the world to find a species that needs protection or some critter that stands out as special. All you need to do is go outside and observe the world around you,” she said.

It is in nature that she nurtures her relationship with God.

“When I am out in nature and the world is quiet, the mountains are overhead, the birds are singing and everything is at peace. Seeing the amazing world around us that God has created, it gives you the space to listen and hear him,” she said.

After two years of hard work, the young women have realized their Scouting goals.

Maddie, Mara and Rachel plan to continue to be active in Scouts and are excited about the adventures to come. They have two planned: a base in Florida that offers Scouts the chance to sail around the Bahamas, tag sharks and perform conservation work; and a base in New Mexico that offers Scouts backpacking and the opportunity examine dinosaur footprints.

They said they recognize their accomplishments will open doors to more young women, and are hopeful others follow in their footsteps while creating their own paths in the Boy Scouts.

Byrd writes for The Catholic Virginian, newspaper of the Diocese of Richmond.