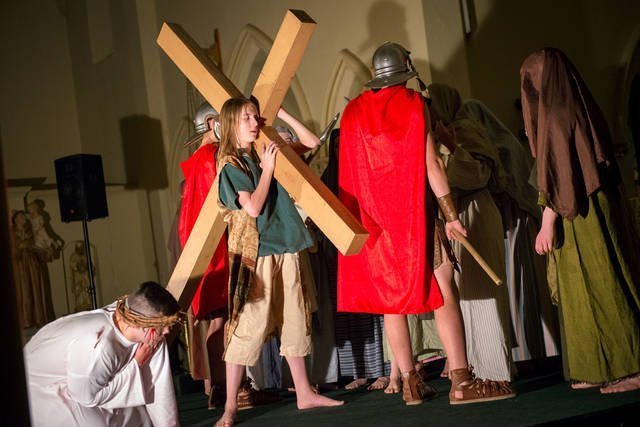 Simon of Cyrene, played by Ayden Kemp, helps Jesus carry his cross during a March 9 Living Stations of the Cross at St. Mary Church in Corning. The performance was presented by youths from Blessed Trinity/St. Patrick parishes in Tioga County.

Catholics in the Southern Tier embraced the recently ended Lenten season with a variety of events and initiatives.

Among the array of spiritual, social and service activities:

‚Ä¢ Father James Jaeger conducted presentations on the Way of the Cross for military veterans at St. Mary Church in Bath. In addition, St. Mary presented Stations of the Cross, Mass, dinner and a program each Lenten Wednesday.

‚Ä¢ Holy Hour, including recitation of the rosary, was offered on Lenten Fridays at St. Mary of the Lake Church in Watkins Glen.

‚Ä¢ A Forty Days for Life vigil concluded March 25 in Ithaca. Participants joined in peaceful prayer to end abortion, between 7 a.m. and 7 p.m. daily, near the Planned Parenthood facility at 620 W. Seneca St.

‚Ä¢ At St. Mary, Honeoye/St. Matthew, Livonia, Friday soup suppers were followed by presentations and discussions. The cluster also raised funds for Mary’s Place, a Rochester ministry for refugees. And, on March 14, St. Matthew joined in an ecumenical Lenten luncheon.

‚Ä¢ A parish mission took place in the cluster of All Saints, Lansing/Holy Cross, Dryden/St. Anthony, Groton. In addition, a book-reading initiative featured The Return of the Prodigal Son by Henri Nouwen, and a Tenebrae service was presented March 25 by the Holy Cross youth group.

‚Ä¢ At St. Ann in Hornell, a lecture on the Eucharist was presented March 7 by Father George Heyman, president of St. Bernard’s School of Theology and Ministry.

‚Ä¢ Events at St. Agnes, Avon/St. Rose, Lima/St. Paul of the Cross, Honeoye Falls included a family Lenten program March 11 and discussions on the Eucharist, the Bible and suffering. Teaching Masses were offered in the cluster as well.

‚Ä¢ The Catholic communities at Cornell University and Ithaca College conducted a six-week winter/Lenten prayer retreat based on the spiritual exercises of St. Ignatius Loyola. Participants prayed daily and met each week with a spiritual director.