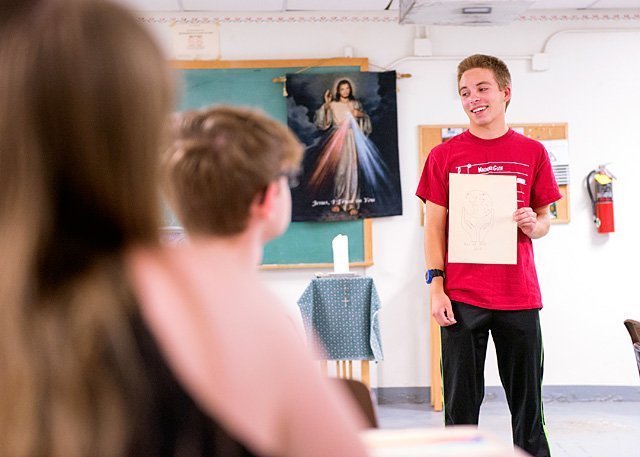 Conlin Wysocki presents his illustration showing how he perceives mercy during the World Youth Day event at St. Benedict Church in Odessa July 30.

Despite World Youth Day 2016 being based in Poland, its focus on young Catholics extended to the Southern Tier thanks to special events in Chemung and Schuyler counties.

Although the Tioga troupe has a 40-year history of re-enacting Jesus’ passion several times per year, that generally occurs only in the Lenten season. So, heading into its World Youth Day commitment, four months had passed since the group’s most recent Living Stations.

However, "It was just fabulous. You could not tell that it was put together in just two practices. It was very moving; the performance was as good as I’ve seen it during Lent," commented Annette Larrabee, director of faith formation and youth ministry at Blessed Trinity/St. Patrick.

One day later, St. Benedict Church in Odessa hosted a Polish-themed celebration for families to link with the World Youth Day taking place July 25-31 in Krakow. Festivities began with the regularly scheduled Saturday-evening Mass at St. Benedict celebrated by Father Steve Lape, pastor. Serving as cantor was a young adult from the parish, Conlin Wysocki. After Mass, a series of activities focused on St. John Paul II, a native of Poland who presided at the first World Youth Day in 1986. 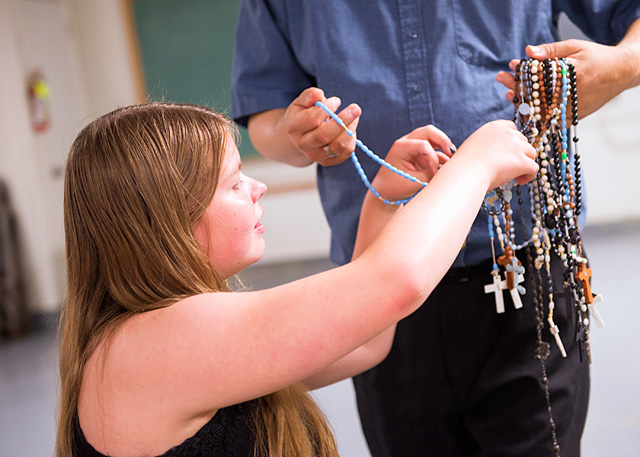 Next came dinner, during which participants were treated to a variety of Polish cuisine: pierogi (filled dumplings), kielbasa (sausage), galumpki (cabbage roll) and haluski (cabbage and egg noodles).

"We had wonderful food," said Jeanne Pavlina, faith-formation coordinator for Schuyler Catholic Community (St. Benedict and St. Mary of the Lake, Watkins Glen). She and her husband, Deacon Dan Pavlina, who serve as youth leaders for the cluster, were organizers of the July 30 event. Pavlina added that she is part Polish, as are some of the folks who participated.

A guided meditation and a sung version of the Divine Mercy chaplet closed out the night. Pavlina said the idea to stage a World Youth Day gathering at St. Benedict came from Jessica Littler, a young-adult Schuyler parishioner who is discerning a religious vocation with the Carmelite Sisters of the Divine Heart of Jesus order in Missouri. Littler had become aware of diocesan-organized World Youth Day events in the Rochester area and suggested doing something closer to home as well.

"It all went well. We were very pleased with the response," Pavlina said, adding that the July 30 celebration also helped jump-start parish youth programs that will start up again in the fall.

Meanwhile, Larrabee was equally happy with the result of the Living Stations in Elmira Heights, for which more than 20 youths made the one-hour trip from Tioga County.

"We had just enough kids," Larrabee said, remarking that "none of them complained" despite wearing heavy costumes inside a very warm church. Larrabee likened the youths’ dedication toward the World Youth Day event to their preparation for Lenten Living Stations, which involves twice-a-week practices beginning in November and performances throughout the Southern Tier each Friday of Lent under the guidance of Dan Cacciaglia and Tim Loso, directors, and Bernadette Kuratnick, youth minister.

World Youth Day is celebrated every three years in various cities around the world. Many young Southern Tier residents took part in the celebration both times it came to North America, with St. John Paul presiding both in 1993 in Denver and in 2002 in Toronto.

"We’d all have loved to go to Krakow and be with Pope Francis, but logistically that wasn’t possible," Pavlina said. "(But) our hearts were there, and we were going to try to do something that means something to our community and also ties the kids back to the larger community."