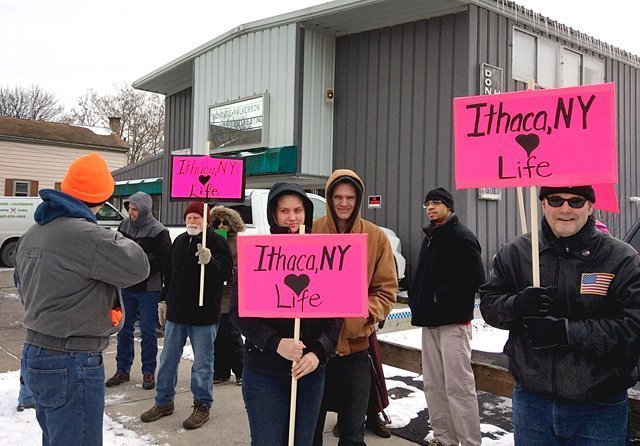 Pro-life supporters gather to pray before the start of a Jan. 22 march in Ithaca held at the same time as the national March for Life in Washington, D.C. Many participants had hoped to travel to Washington, but weather concerns caused the cancellation of their bus trip.

Yet rather than simply throw in the towel, would-be bus travelers quickly devised alternatives for demonstrating their pro-life convictions.

Groups that were to leave for Washington from Ithaca and Horseheads the night of Jan. 21 saw their plans scuttled earlier that day, when their charter bus companies announced cancellations in anticipation of a major blizzard forecast for the nation’s capital. But before long, organizers of both contingents had come up with their own Marches for Life.

The first took place in Ithaca, beginning at 1 p.m. Friday, Jan. 22 — the exact time of the Washington March for Life. A group of more than 50 pro-life advocates conducted a prayer vigil and march near the Planned Parenthood building on West Seneca Street, brandishing numerous signs in defense of life including six bright pink "Ithaca, N.Y. Loves Life" signs that were to have been used in Washington.

Carolann Darling, an organizer of the Ithaca bus group, said that the scheduled travelers hail not only from Tompkins County but also much of the Finger Lakes region. She was particularly impressed that five youths and young adults from one family in Earlville — a village 65 miles east of Ithaca — had planned to go to Washington and turned out for the local March for Life as well.

Darling added that the Ithaca march saw organization and participation from Catholics as well as the Ithaca First Assembly of God, with live streaming of the Washington March for Life’s morning events taking place at the Assembly of God facility prior to the local march.

"The beautiful thing is that this is truly an ecumenical, interfaith effort," said Darling, a member of Ithaca’s Immaculate Conception Parish. Her church also held a scheduled Respect for Life Mass on the evening of Jan. 21 — a few hours before two busloads were to have departed for Washington — to which people of all faiths were invited.

Meanwhile, a group that was to leave from Horseheads did a similar ad-lib when its two buses to Washington were cancelled. On Saturday morning Jan. 23 — the day after the March for Life — a prayer vigil and march took place near the Planned Parenthood facility on East Church Street in Elmira.

Dr. Steve Spaulding, president of Chemung Valley 4 Life and bus-trip organizer, said he spent a large portion of Jan. 21 notifying people of the cancelled trip to Washington. A few people from his contingent attended the Friday March for Life in Ithaca, and from there John Brennan, the Chemung Valley 4 Life secretary, set about organizing a Saturday march. Spaulding, who took part in the Elmira march, said nearly 25 people turned out on a bitterly cold day.

"Our local March for Life was good in a number of ways. First, many of those who were going to go on the bus ride wanted to do something," said Spaulding, a parishioner of St. Mary Our Mother in Horseheads. He added that the Elmira event also helped establish and deepen relationships among area pro-lifers, which "can only be good for the pro-life movement in our area."

As for Washington, D.C., the March for Life and its accompanying events went on as scheduled. However, heavy snow did begin near the march’s conclusion, eventually dumping two-plus feet on the area as a part of Winter Storm Jonas, which ended up paralyzing much of the eastern United States.

The March for Life is held annually in peaceful protest of the Roe v. Wade decision handed down by the U.S. Supreme Court on Jan. 22, 1973, legalizing abortion in the United States. Spaulding — who has been to nearly every March for Life since he began attending in 1993 — said this was the first march he’s ever been forced to miss due to weather. He did end up watching the Washington march on television — and although attendance was severely depleted from the hundreds of thousands that would normally turn out, "I was pretty encouraged by the number of people they had despite the storm," he said.