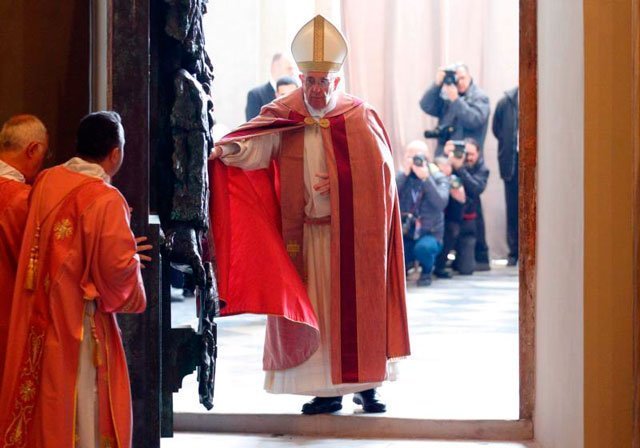 Pope Francis opens the Holy Door of the Basilica of St. John Lateran in Rome Dec. 13. Holy doors around the world were opened at city cathedrals, major churches and sanctuaries Dec. 13 as part of the Jubilee of Mercy.
By Carol Glatz
Catholic News Service
VATICAN CITY (CNS) — With the opening the Holy Door at the Basilica of St. John Lateran, Pope Francis declared that the time for tenderness, joy and forgiveness had begun.
As holy doors around the world were opened at city cathedrals, major churches and sanctuaries Dec. 13, the pope said this simple gesture of opening
God’s house to the world serves as "an invitation to joy. The time of great pardon begins. It is the Jubilee of Mercy."
Dressed in rose vestments on Gaudete Sunday, the third Sunday of Advent, marking the joyful expectation of Christmas, the pope began the ceremony outside the basilica in front of the bronze holy door. The door depicts a bas relief of the crucified Christ looking down on Mary tenderly holding the baby Jesus, whose small foot shone like bright gold from the countless kisses and touches of visiting pilgrims.
"This is the door of the Lord. Open for me the gates of justice. I will enter your house, Lord, because of your great mercy," the pope read solemnly before climbing two marble steps and pushing open the large door. He crossed the threshold decorated with a garland of flowers and greenery and bowed his head in silent prayer inside the darkened interior of the basilica.
The church and the people of God are called to be joyful, the pope said in his brief homily.
With Christmas approaching, "we cannot allow ourselves to become tired, no form of sadness is allowed even if we have reason for it with the many worries and multiple forms of violence that wound our humanity," he said.
Amid the bullying, injustice and violence wrought, "above all, by men of power, God makes it known that he himself will rule his people, that he will never leave them at the mercy of the arrogance of their leaders and that he will free them of all anguish," the pope said.
People today are called to listen to the words of the prophet Zephaniah in the day’s first reading, as he told God’s people not to be afraid or discouraged "because of doubt, impatience or suffering."
God always protects his people, he is always near, the pope said, and that is why "we must always be joyful and with our kindness offer everyone witness of the closeness and care God has for everyone."
The Holy Year of Mercy is meant to be a time for people to rediscover God’s real presence in the world and his tenderness, he said.
"God does not love rigidity. He is father. He is gentle. He does everything with fatherly tenderness."
As Christians are called to cross the threshold of "the door of mercy," they are asked to welcome and experience God’s love, which "re-creates, transforms and reforms life."
From there, people of faith must then go out and be "instruments of mercy, aware that we will be judged by this," the pope said. Being a Christian calls for a lifelong journey and a "more radical commitment" to be merciful like God the father, he added.
Christians are asked to be joyful as they open their arms to others and give witness to "a love that goes beyond justice, a love that knows no limits.
This is the love we are responsible for despite our contradictions," and weaknesses, he said.
Later in the day, the pope appeared at the window of the apostolic palace to recite the noonday Angelus with visitors in St. Peter’s Square.
He focused on the day’s Gospel reading according to St. Luke, in which people in the crowd, including tax collectors and soldiers, asked St. John the Baptist "What should we do?" in order to convert and become acceptable for the coming of the Lord.
St. John does not leave them waiting for an answer, the pope said, and replies with concrete instructions: to live justly, in moderation and in solidarity
toward those most in need. "They are the essential values of a life that is fully human and authentically Christian," the pope said.
The saint said to share food and clothing, do not falsely accuse others, do not practice extortion and do not collect more than the tax prescribes, which means, the pope said, "no bribes. It’s clear."
By addressing people who held various forms of power, the prophet showed that God excludes no one from being asked to follow a path of conversion in order to be saved, not even the tax collectors, who were considered among the worst of all sinners.
God "is anxious to be merciful toward everyone and welcome everyone in the tender embrace of reconciliation and forgiveness."
Advent is a time of conversion and joy, he said. But today, in a world that is "assailed by so many problems, the future weighed down by the unknown and fears," he said, people really need courage and faith to be joyful.
In fact, life lived with Christ brings the gift of solid and unshakable joy because it is rooted in knowing "the Lord is near" always.
The same morning, U.S. Cardinal James M. Harvey, archpriest of the Basilica of St. Paul Outside the Walls, opened that basilica’s holy door.
Pope Francis was scheduled to open the fourth and last holy door in Rome at the Basilica of St. Mary Major Jan. 1, the feast of Mary, Mother of God.
Copyright © 2023 Catholic News Service, Inc. All rights reserved. Linking is encouraged, but republishing or redistributing, including by framing or similar means, without the publisher's prior written permission is prohibited.