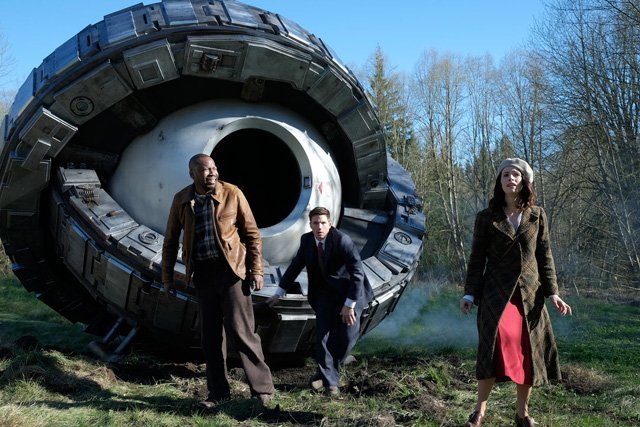 NEW YORK (CNS) — Much in the manner of “Lost” fans, who wondered what exactly was going on in that series, the audience for NBC’s drama “Timeless” will increasingly want a definitive answer to the core enigma that drives its action and contributes to its suspense.

Science fiction undergirds this diverting, if fantastical escapist adventure, which premiered Oct. 3, and airs Monday nights, 10-11 p.m. EST. Potential viewers should note that the program is marked by considerable violence, occasional crude language, some sexual content, including a depiction of adultery, as well as references to one character being born out of wedlock. Accordingly, it’s appropriate for adults only.

The trio use their own time machine to chase Flynn. The Hindenburg explosion, the Apollo moon landing and the Battle of the Alamo are among the decisive historical scenes to which the team travels. Viewers, of course, will need to surrender their disbelief as Lucy, Wyatt and Rufus hurtle thorough time and space, flawless landing precisely where they need to be.

Best known for his 10-year stint as Dr. Luka Kovac on NBC’s long-running series “ER,” Visnjic is appropriately brooding and calculating as Flynn, but not entirely unsympathetic. For instance, having lost a wife and child, Flynn wants Mexican military commander Gen. Santa Anna (Alex Fernandez) to spare the women and children at the Alamo. Viewers will relate to Flynn’s grief over his loss, which he blames on an entity called Rittenhouse.

Nine episodes in, the audience still isn’t quite sure if Rittenhouse is a criminal syndicate, a corrupt corporation, a secret society or a shadow government — or perhaps all of the above. The more we learn about it, though, the more understanding we become of Flynn’s point of view.

We want to root for his opponents. But we also realize that they may be pursuing the wrong foe, and the way the series makes our allegiances uncertain is part of its appeal.

Casting relative newcomers Spencer, Lanter and Barrett as the leads enables viewers to buy into the show’s credulity straining elements more readily than they would if more established actors played these parts. As the season has progressed, the principals have settled into their roles and developed a nice chemistry. Barrett especially stands out as the intense and conflicted Rufus.

Viewers of a certain age will get a kick out of seeing Matt Frewer again. He plays the time machine’s inventor, Anthony Bruhl, who also serves as Flynn’s laconic, reluctant accomplice. As many will recall, back in the ’80s, Frewer became something of a pop-culture sensation playing the sarcastic artificial-intelligence character for whom “The Max Headroom Show” was named.

Mature viewers willing to overlook such relatively innocuous transgressions — as well as the inept soundtrack, which artificially and gratuitously signals escalating tension — may discover that “Timeless” is just the getaway they need after a long day at work.