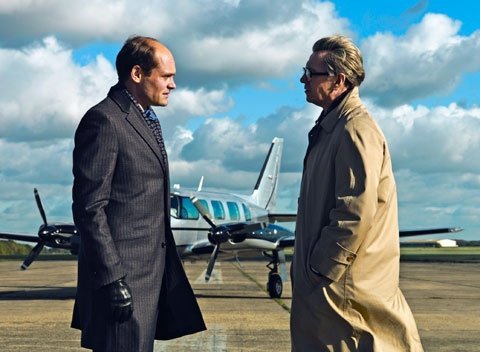 NEW YORK (CNS) — There’s a double agent on the loose, and seemingly no one can be trusted in "Tinker, Tailor, Soldier, Spy" (Focus), a faithful adaptation of John le Carre’s best-selling 1974 novel.

Swedish director Tomas Alfredson ("Let the Right One In") sets a deliberately slow pace, especially for an espionage thriller, demanding the viewer’s full attention as he introduces pieces of the puzzle and juggles multiple characters and story lines, many told in flashback. It’s a journey that’s labyrinthine and sometimes confusing, disturbing and often gruesome, and it leads to a morally ambiguous resolution.

The time is 1973, more than 25 years into the Cold War between East and West. At Britain’s Secret Intelligence Service, code-named "The Circus," panic is rising. The chief, known as Control (John Hurt), fears that a double agent has infiltrated the highest ranks of the organization and is feeding vital state secrets to the Soviets.

Determined to ferret out the "rotten apple" and plug the "leaky ship," Control dispatches one of his agents, Jim Prideaux (Mark Strong), to Hungary to meet someone who claims to know the mole’s identity. The rendezvous is a disaster, and Control lays the blame on his top lieutenant, George Smiley (Gary Oldman), who is consequently sacked.

Smiley, a deep thinker and man of few words, is not out of work for long, though.

Gaining the help of younger agent Peter Guillam (Benedict Cumberbatch) — who has issues of his own — Smiley embarks on a sophisticated game of cat and mouse, revisiting the demons of his own past while uncovering the hidden lives of his fellow spies.

Things go from simmer to boil when a rogue agent named Ricki Tarr (Tom Hardy) contacts Smiley and claims to have vital information — even though Tarr himself was once suspected of being a double agent.

With its stimulating conversations and lengthy ruminations, "Tinker, Tailor, Soldier, Spy" is more cerebral than graphic. But the inclusion of the elements listed below nonetheless severely circumscribes its appropriate audience.

The film contains bloody violence including gunplay and torture, a scene of nonmarital sexual activity, brief rear nudity, a homosexual reference and some profane and rough language. The Catholic News Service classification is L — limited adult audience, films whose problematic content many adults would find troubling. The Motion Picture Association of America rating is R — restricted. Under 17 requires accompanying parent or adult guardian.