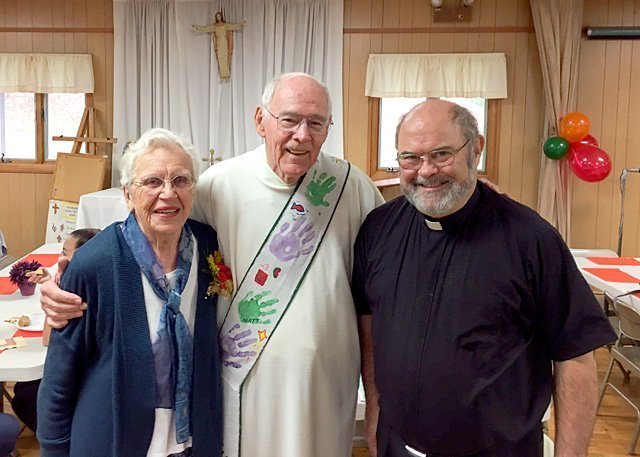 Marion Rutan (from left), Deacon Warren Rutan and Father William Moorby pose for a photo during the farewell reception for the Rutans at Newark Valley’s St. John the Evangelist Church Oct. 23.

If worth could be measured by level of service given over several decades’ time, Deacon Warren Rutan and his wife, Marion, may well be considered priceless by the folks at Blessed Trinity/St. Patrick parishes.

A well-attended gathering on Oct. 23, held at Newark Valley’s St. John the Evangelist Church, reflected the deep affection and appreciation that many parishioners carry for the Rutans. The regularly scheduled 11:15 a.m. Mass included a touching homily by Deacon Rutan and was followed by a reception to bid the couple a fond farewell in light of their relocation to Florida in late November.

"Several of the people from the parish got up and spoke about the wonderful times we’ve had," Marion Rutan said.

Those times go back quite a long way. Married in 1954 at St. Patrick Church in Owego, the Rutans began their connection with St. John the Evangelist in 1964 — the same year Deacon Rutan went to work for IBM Corp., where he was an engineer.

Deacon Rutan noted that he wasn’t Catholic at that time, although he occasionally attended Mass with Marion and the rest of their family. He eventually was welcomed into the church in 1973.

"My conversion took place over a good many years," Deacon Rutan remarked, adding that much of his evolution toward the Catholic faith could be attributed to "Marion’s prayerfulness."

Among their many volunteer efforts at St. John the Evangelist, the Rutans have prioritized evangelization outreach, particularly the Cursillo spiritual-renewal movement — the latter experience helping lead Deacon Rutan to pursue the permanent diaconate for the Diocese of Rochester. He began formation during his final two years at IBM, retiring from the company in 1991.

"There were nights I fell asleep at the dining-room table trying to study," he recalled with a chuckle.

Ordained a deacon in 1993, Deacon Rutan was assigned to St. John the Evangelist as well as the former St. Francis of Assisi Church in nearby Catatonk. Much of his initial ministry involved preaching, hospital calls, home visits and funerals; as time went on he also performed a number of weddings and baptisms.

In late 2004 Deacon Rutan submitted his letter of retirement, as required by canon law when a deacon reaches his 75th birthday. Although he was released at that point from any official obligation, he has remained active, willingly helping out at all six Tioga County churches following a consolidation of parishes in 2003. (Four of those churches remain open today: St. John the Evangelist and Owego’s St. Patrick, along with St. James in Waverly and St. Margaret Mary in Apalachin.)

As for Marion Rutan, she has been steadily involved over the years in such parish roles as religious-education teacher and adult faith-formation volunteer, particularly with the Rite of Christian Initiation of Adults. She also has helped put on dinners following funerals.

Now, at long last, the Rutans have planted new roots. After spending many of their previous winters in Florida, they are living there permanently following the purchase of a home in Haines City, located in the central part of the state near Orlando.

Deacon Rutan, who celebrated his 87th birthday on Nov. 4, said he’s "in relatively good health" and looking forward to helping out regularly at St. Matthew Parish in Winter Haven, where he and Marion have gotten to know quite a few parishioners over the past three winters.

"They’re just so warm and welcoming," Marion said, adding that she plans to become involved in some sort of prayer ministry at St. Matthew.

Yet the Rutans won’t be leaving Tioga County behind completely, saying they plan to return for extended visits with family and friends each summer. Now married 62 years, they have six children, 10 grandchildren and six great-grandchildren, with a seventh on the way.

In the meantime, as this part of the country braces for challenging winter weather, the Rutans are looking forward to several months of balmy Florida sunshine. Further warmth will be derived from memories of their special send-off Oct. 23, as well as the countless other joys from their lengthy tenure in Tioga County.

"It’s very hard not to cry when you’re saying good-bye. We will miss these people terribly," Marion said. However, she added, the pleasures of their new habitat should help ease the transition.

"We’re excited about being in Orlando," she said.