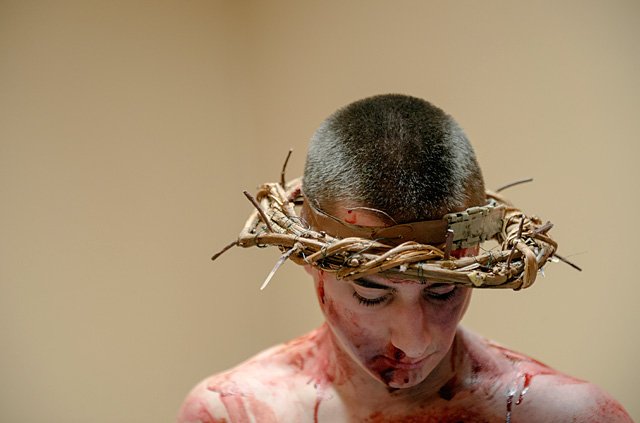 Since early January, 35 or so youths have convened twice per week at Apalachin’s St. Margaret Mary Church to rehearse for Living Stations of the Cross. They’ll also commit every Friday night during Lent to their dramatic depiction of Jesus’ passion, traveling to several parts of the Southern Tier.

And how’s this for dedication? One troupe member, Tiffany Czebiniak, has kept up this regimen for the past six years even though she lives in Lockwood, 40 minutes west of Apalachin. Yet she willingly gives her time, calling her Living Stations involvement "something that I truly enjoy."

Daniel Raftis acknowledged that Living Stations is a major commitment but said it’s something he’s happy to do for his faith, saying that "whatever I give up to do God’s work will eventually work itself out in my favor."

For four decades, young people such as Tiffany and Raftis have attached themselves to Living Stations in Tioga County’s Blessed Trinity/St. Patrick parishes. The tradition remains alive and well today, with Lenten presentations set to start March 3 and continuing for seven performances through Good Friday, April 14.

Living Stations began at St. Margaret Mary in 1977 when a youth-led Stations of the Cross, now common in the Diocese of Rochester, was a fairly new concept. Whereas most Living Stations involve just a single performance at one’s parish — usually on or near Good Friday — Tioga’s group will perform Living Stations in Schuyler and Broome counties as well as their own throughout Lent.

Participants are in grades 7 through 12. Most come from the four Blessed Trinity/St. Patrick worship sites (St. Margaret Mary along with St. Patrick, Owego; St. James, Waverly; and St. John the Evangelist, Newark Valley), and a few non-Catholics take part as well. Numerous adult volunteers, such as Tiffany’s father, William, assist with the production, costumes, makeup and transportation.

Tim Loso, who serves as codirector along with Dan Cacciaglia, noted that when he performed Tioga’s Living Stations in the early 1980s, there were only a few cast members for each station, whereas as many as 20 can now be involved.

"The level of energy and intense drama has gone up with these larger numbers of performers," he said.

Cast members typically act out a variety of roles during a given year. For instance, Tiffany has different reading assignments this Lent and also is depicting Mary. In the past she has played "every female role," she said, including Veronica, a weeping woman and a crowd member. Meanwhile, Raftis said he has covered all the male characters — among them a crowd person, a soldier, Simon, Pontius Pilate, John and a reader. In recent years he has played the pivotal role of Jesus Christ.

Tiffany and Raftis said a highlight of their Living Stations experience is the feedback from audience members, who tell them how touched they were by the presentation.

"It is amazing to see what youth my age can do for others by living in Christ," said Tiffany, 17.

"It is incredible to think that as an 18-year-old, I have the power to move God’s love and message through so many people," agreed Raftis — who, like Tiffany, is in his sixth year with Living Stations.

"I am always moved to see the transformation of the kids and the growth from the first practices to the performance," Kuratnick said. "They really give a lot, and have touched many lives along the way."

"They are fun, full of enthusiasm and always laughing, but when it’s time to be serious they truly perform from the heart," Loso added.

Many performers have family connections within the group. For instance, both Raftis (brother Josh and sister Rachel) and Tiffany (brother Jeffrey) have siblings who are, or were, cast members; and the children of Kuratnick (son Joe and daughter Stephanie), Loso (son Andrew and daughter Jana) and Cacciaglia (daughters Emily, Melissa, Ariel and Kelsey, and sons Ben and Joel) have participated as well.

Yet even when there’s not a blood connection, "The Stations cast is like a family to me," Tiffany stated.

"We all spend so much time together that it is hard not to make friends," she said, adding that "no experience I have ever shared with others has been quite as special to me as Stations is."