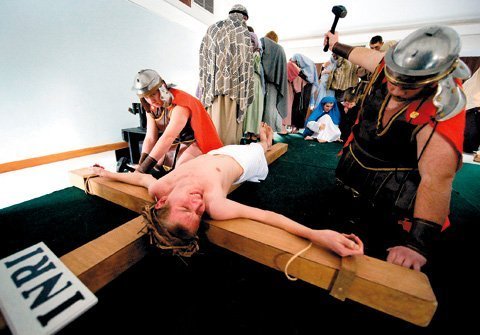 John Martinez (left) and Shane Riley nail Kenny Donov to the cross during a February 2009 Living Stations of the Cross rehearsal at St. Margaret Mary Church in Apalachin.

It’s almost Lent, meaning the time has arrived for a special production that’s been a hit across the Southern Tier for more than 35 years.

Living Stations of the Cross, an initiative of Blessed Trinity/St. Patrick parishes, is gearing up for presentations each Lenten Friday. The troupe of 24 youths in grades 7-12, along with 10 adult volunteers, has rehearsed twice per week since early January at Apalachin’s St. Margaret Mary Church.

That’s where Living Stations originated in 1977, during an era when the idea of a youth-led Stations of the Cross — now popular in many parts of the Rochester Diocese — was fairly novel. Over the years the Tioga troupe has expanded its itinerary beyond county lines, presenting its interpretation of Christ’s passion in neighboring Broome County as well as in such diverse settings as Elmira Correctional Facility and Rochester’s Sacred Heart Cathedral.

Kathy Hamilton, Blessed Trinity/St. Patrick’s youth-ministry coordinator, emphasized that there’s a place for everyone and performers get to play multiple roles, thus allowing them to view the Passion from the perspectives of numerous biblical figures. Though the weekly presentations involve a substantial physical and emotional commitment, Living Stations routinely attracts young participants from the four Blessed Trinity/St. Patrick churches (St. Margaret Mary, St. Patrick in Owego, St. James in Waverly and St. John the Evangelist in Newark Valley) as well as other parishes and denominations — not to mention youths who aren’t regular church-goers at all.

"I think it is popular to young people because, we as young people, can relate to Christ in a lot of the settings of teenage years. Peer pressure at school, or family struggles, or social issues can all be related to Jesus Christ on the cross, and his ability to help us to bear our own cross when we live our lives," said Jeffrey Czebiniak, 17, of St. James Church, who is in his fifth year with Living Stations. He is planning to portray Jesus this Lent after having held roles in past years of light/sound crew member, Simon Peter, a village person, soldiers and Joseph.

"Your acquaintances that you rarely know now may become your closest friends because you share the same ideas and share the same faith," said Tiffany, a second-year participant, who has previously been a reader, villager, weeping woman and set-up crew member.

Dan Cacciaglia, a Living Stations codirector who attends St. Margaret Mary, has six children who have thrived in Living Stations: current members Emily, 17; and Ben, 16; as well as Melissa, 26; Joel, 23; Ariel, 22; and Kelsey, 21.

"No other youth program for teens forces them to be immersed in Scripture twice a week and the drama of (Christ’s) life," remarked Cacciaglia, who along with Tim Loso is a second-year codirector. They replaced longtime director Terry White.

"I was very shy when I started and kept working my way up to the major roles over the years," he noted.

Kevin Jackowski, who took part in Living Stations from 1987-90, observed that the experience breeds a sense of empowerment.

"The kids make it their own and take ownership of the program by helping each other with their parts and responsibilities," he said.

"The youth are the owners of the program," Hamilton agreed. "Each year we see them recruit new young people, train and mentor them in their roles, make suggestions to the scripts, and lead the weekly practice and prayer sessions."

Yet the actors are not the only ones deeply moved by Living Stations. Cacciaglia noted that audiences are impacted by getting to "see Christ in a very real way."

"All of (the youths) have stories of how their portrayal of his Passion have touched members of their audiences in so many ways. They have been told of healings and peace from what they perform," he said.

Living Stations of the Cross will take place each Friday of Lent at the following locations. Performances begin at 7 p.m. except for the Good Friday finale, which has a 7:30 p.m. start.