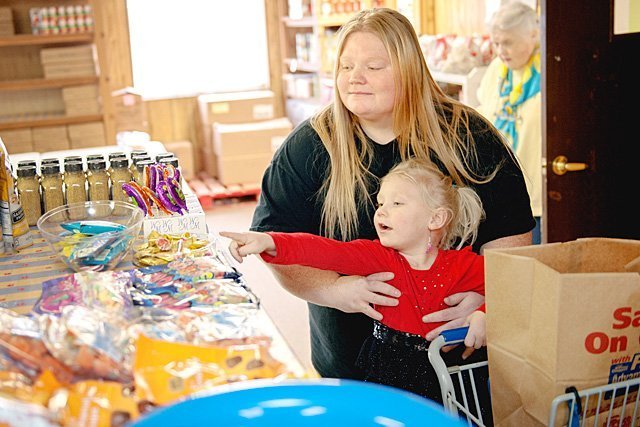 Tiffany Floyd gets some help from her 4-year-old daughter, Jazmyn Sleeper, as she picks out items at Tioga County Rural Ministry’s food pantry in Owego Nov. 20.

Day in and day out, Tiffany Floyd faces the challenge of making ends meet. She has two children ages 6 and 4, is on disability and doesn’t qualify for food stamps. Not surprisingly, Floyd said she often comes up short in affording rent, utilities and food.

Funds also are not easily available to make the holidays a special time for her family. But fortunately for Floyd, Tioga County Rural Ministry is in her corner.

Floyd, a monthly visitor to TCRM’s food pantry, emerged Nov. 20 from the Owego facility — located at 143 North Ave. in the village center — with significant additions to her usual food allotment. On that trip she also received a big turkey along with potatoes and vegetables, making for a bountiful Thanksgiving dinner.

Thanks to TCRM and its legion of community supporters, many other folks in need are getting holiday assistance as well. Sister Mary O’Brien, CSJ, the ministry’s executive director, said that nearly 300 people signed up in October to receive food, clothing and/or toys — and nobody is walking away empty-handed.

TCRM is providing Thanksgiving and Christmas food for Owego residents, by appointment, for each holiday season. Sister O’Brien said most weekdays are completely filled with the 15-minute appointments, which began Nov. 5. Residents are given food and/or grocery-store vouchers to accommodate the size of their families.

TCRM also offers clothing and toys at Christmas for folks all over Tioga County, with a particular focus on children. Many of these items are made possible through the ministry’s Adopt-A-Family initiative; giving trees at area Catholic and Protestant churches; and a "Toys for Tots" giveaway to take place Dec. 18 at the Veterans of Foreign Wars post in Owego.

"The people are so grateful. Some people will just walk away and say, ‘Wow, this is so wonderful,’" Sister O’Brien said.

Donors include local individuals, families, farms and businesses. Sister O’Brien added that for many years TCRM has received an annual grant of $10,000 from the Mildred Faulkner Truman Foundation of Owego that is applied toward the holiday giveaways. Other local organizations supporting this cause include the Vietnam Veterans of America, Kiwanis and the VFW. For instance, a golf tournament organized by the VFW this past October netted $2,000 for TCRM’s holiday effort.

Volunteers also play a big role during the season by helping sort toys, collecting food donations, baking, making clothing such as knitted hats and mittens, and delivering items to people who are elderly, infirm or otherwise unable to travel to TCRM.

Sister O’Brien said some donors will request to personally deliver items to the same family they adopted the year before. "I love the relational aspect. This is the type of relationship that we love to nurture," she remarked.

"It’s an amazing outpouring from the community," she added. "One of the things that is quite unique about this area is that people have a real care and concern for those who are poor, in crisis situations … more than any community I’ve been in."

TCRM is a nonprofit, ecumenical ministry supported by churches throughout Tioga County. It began in 1978 in the basement of Owego’s St. Patrick Church. Sister O’Brien has served as executive director since 2012 after spending the previous nine years as pastoral associate at Ithaca’s St. Catherine of Siena Parish.

The ministry serves thousands of low- and middle-income residents during the year via its on-site emergency food pantry; financial assistance for fuel, utilities, rent, and car and medical expenses; home repairs; transportation to medical appointments; and home visitations to deliver groceries and other goods.

Sister O’Brien said those served by TCRM are largely a mix of adults who have lost their jobs or are working low-paying or part-time jobs; single parents; and many elderly as well. "The need is pretty great, and we do have more come for the holidays," she said.

Floyd, who is receiving additional items for Christmas to go along with her Thanksgiving food, said she can count on TCRM at any time of the year.

"They’re always there if I need help with anything," she stated, noting that she has sought out TCRM since she was 17 and the ministry also gives her occasional emergency financial assistance. "Every little bit of help I appreciate."

EDITOR’S NOTE: TCRM is still accepting donations for the holidays. To donate food, supplies, gifts or cash, or to volunteer, call 607-687-3021.