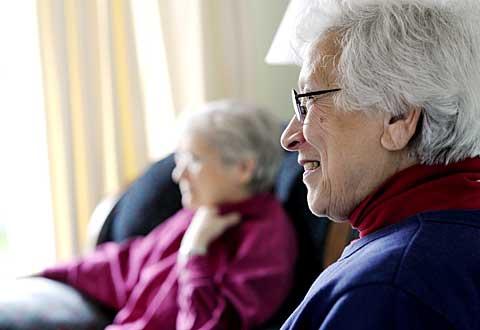 Mary Rose Eschler smiles as she listens to Ellen Keough speak during an April 13 meeting of the Mother's Prayer Group at St. Patrick Church in Owego.

Whereas moms everywhere will be in the spotlight on Sunday, May 9, several women in Tioga County celebrate a weekly Mother’s Day of sorts throughout the year.

Mutual prayer and support are at the core of the Mothers’ Prayer Group, which meets each Tuesday at 11:15 a.m. at St. Patrick Parish in Owego. Each gathering lasts approximately 30 minutes, with participants offering prayers of thanksgiving to God as well as intentions for their children — and, in many cases, their grandchildren.

Ellen Keough, pastoral associate for Blessed Trinity/St. Patrick parishes, said women of all ages are welcome; the only requirement is to be a mother. She recalled that the group began about a year ago, inspired by intentions being offered during a morning prayer service at St. Patrick Church.

"There were so many people there praying for their children’s needs and worries, that someone at the end said, ‘You know, we should have a prayer group for moms,’" Keough said.

A typical Mothers’ Prayer Group meeting begins with a formalized prayer or Scripture reading related to motherhood. Participants incorporate prayer and other resources from Mothers Prayers, a multidenominational organization that was begun by two grandmothers in England in 1995.

Keough said the meetings are usually attended by four to seven mothers. New members are always welcome and may join the group any Tuesday morning. Or, Keough suggested that mothers in any geographic area can start their own prayer group by visiting http:mothersprayers.mpweb.co.uk.

Meetings in Owego usually conclude with the opportunity for participants to offer intercessions and share with each other what’s going on in the lives of their children and grandchildren. Keough said that intentions are offered "if they’re sick or looking for jobs," or there might be "prayers of thanksgiving when things go well. Just (recently) I knew my son was coming home for Easter, and I prayed for safe travels."

According to the Mothers Prayers Web site, this support network may involve highly personal matters as well, such as children’s struggles with addictions; their relationships with family and others; the hope they’ll return home after many years of being away; and prayers that they’ll have strong faith in a world that often doesn’t reward such a stance.

"The group knows what we say there, stays there," Keough remarked.

"I appreciate the confidentiality, that what I say is not going to leave the group — being able to say something that you might not otherwise say," Jones said.

As the weeks have gone on, members have found that their bonds have naturally grow deeper.

"Sometimes we have, maybe, burdens that we’re carrying alone. When we come together and share in strict confidence, it’s like part of the burden is lifted when you know other people are praying for you," Lepkowski said.

"It’s always a catharsis to be able to say it out loud. It’s not a misery-loves-company type thing, it’s knowing that everybody goes through the same things and you’re not alone," Jones added.

"It takes a load off when you know someone else is praying for the same things you are," Keough agreed.

Lepkowski observed that the Mothers’ Prayer Group has expanded the focus of its intentions by praying for fathers and husbands as well as mothers who don’t attend the group. Another development has involved a basket that members use for their written intentions. Now, Lepkowski said, people attending St. Patrick Church seek out the basket in the tabernacle room to submit anonymous intentions, many of which aren’t related to motherhood. Even so, Lepkowski said the Mothers’ Prayer Group is happy to add those prayers to its meetings.

Keough said current Mothers’ Prayer Group meetings comprise mostly moms of adults, although the group was originally geared toward women with younger children. Though Keough still hopes for the latter category to surface, she said the presence of older mothers has served as a reminder that a mother’s care and concern for her brood never diminishes.