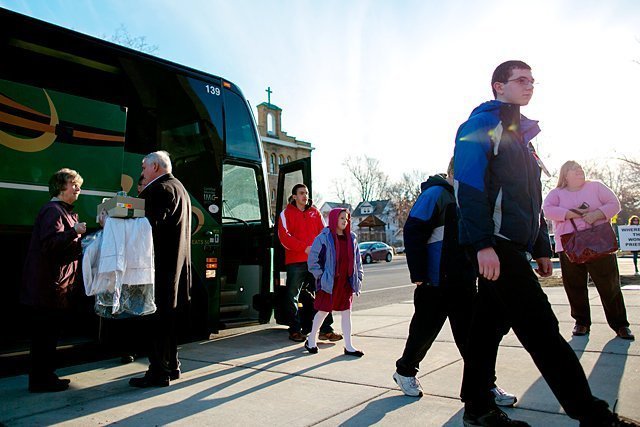 With nearly 50 people at Sacred Heart Cathedral on March 31, Blessed Trinity and St. Patrick parishes were among the largest contingents to attend the annual Chrism Mass.

With nearly 50 people at Sacred Heart Cathedral on March 31, Blessed Trinity and St. Patrick parishes were among the largest contingents to attend the annual Chrism Mass.

Even more impressive may have been the effort exerted to get there.

The parishes are located in Tioga County — the furthest distance from the city of Rochester that is still within the Rochester Diocese. Despite a nearly 300-mile round trip, participants were not deterred from hopping a chartered bus and heading north for a good portion of the day.

The Chrism Mass, which takes place at the cathedral each Tuesday of Holy Week, is among the few annual events that unite all diocesan parishes. JeJe Fitzgerald, trip organizer, said it was important for Blessed Trinity/St. Patrick to show that distance alone wasn’t going to keep her parishes from participating.

"We felt the need to be a part of the diocesan family," said Fitzgerald, who serves as volunteer/parish-life coordinator for the Tioga parishes.

Travelers departed from St. Patrick Church in Owego at 2 p.m., then picked up a group at St. James in Waverly about 20 minutes later. Blessed Trinity/St. Patrick comprises St. Patrick and St. James along with St. John the Evangelist, Newark Valley; and St. Margaret Mary, Apalachin.

Many passed the time on their road trip by watching a movie about St. John Paul II that had been brought by Julie Durand, youth minister for St. John the Evangelist. Some youths played chess, whereas Fitzgerald’s 16-year-old daughter, Jessica did, homework.

Upon reaching Rochester, the Tioga group enjoyed dinner at a buffet restaurant and then headed over to Sacred Heart. Fitzgerald observed that for many, simply stepping inside the cathedral was an experience unto itself, since most were visiting it for the first time.

"I wanted to go up in the balcony, and when I went up all the children went with me," she said, adding that an impressive total of 13 Blessed Trinity/St. Patrick youths attended the Chrism Mass. 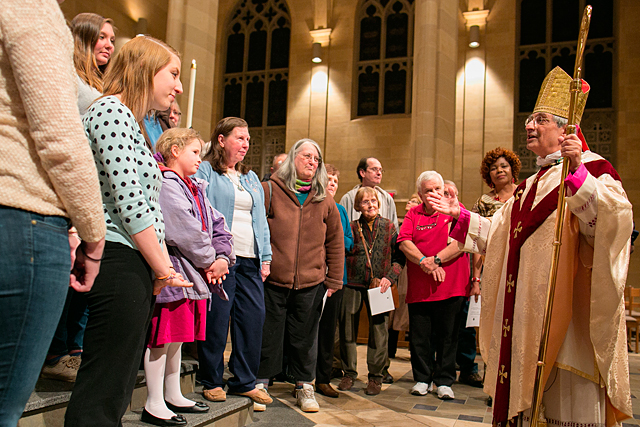 The liturgy, celebrated by Bishop Salvatore R. Matano, began at 7 p.m. and featured two main highlights at its midpoint. First, Bishop Matano led the numerous diocesan priests assembled in a renewal of their priestly promises. Next, the sacred oils — to be used by parishes throughout the upcoming year — were brought forward. The bishop blessed the Oil of the Sick, designated for the anointing of the sick; the Oil of the Catechumens, for baptism; and the Holy Chrism, for confirmation and ordination.

From there, the vessels were immediately taken to a basement room in the cathedral. With Mass still going on, volunteers poured the oils into hundreds of marked containers, so that representatives from Blessed Trinity/St. Patrick and other diocesan parishes could bring them back to their respective faith communities after Mass.

Tioga was well represented among the priests and permanent deacons, as Father Thomas Valenti, parochial administrator, Father Brian Carpenter, parochial vicar, and Deacon Michael Donovan all attended. Fitzgerald said it was an extra bonus to meet up with several diocesan priests who had previously served Blessed Trinity/St. Patrick, including Father William Moorby, the parishes’ longtime pastor, who in 2014 became pastor of Good Shepherd Catholic Community in Cayuga County.

Blessed Trinity/St. Patrick’s effort to attend the Chrism Mass was not lost upon its celebrant, who caught up with the attendees before they reboarded their bus.

"Bishop Matano came out and spoke with the group and had pictures taken. He probably spent 10 or 15 minutes with us," Fitzgerald noted. "It was fabulous."

The group finally departed from the cathedral around 9:30 p.m., returning to the Tioga area at midnight.

Fitzgerald said it had been about five years since the last organized effort had been made for Blessed Trinity/St. Patrick to attend the Chrism Mass. Based on the success of the March 31 journey, she said plans are already underway to do it again next year.

"When you think about the fact that people are willing to go 10 hours on a road trip and pay to go to church (for trip expenses), I thought it was a great number. And we would have had more participants if it wasn’t such a late night," she remarked.