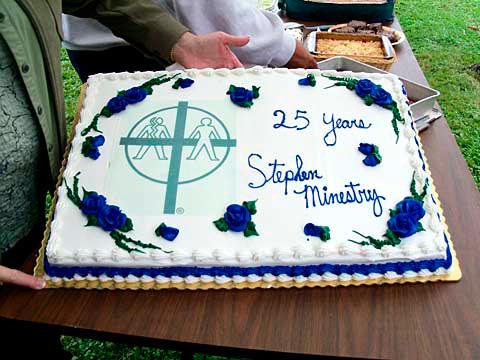 A cake commemorating 25 years of Stephen Ministry in Tioga County was made for Blessed Trinity/St. Patrick parishes’ picnic and Mass held Sept. 12 in Apalachin.

Though 25 years have passed, Ann Domiano clearly remembers the first Stephen Ministry meeting ever held at Apalachin’s St. Margaret Mary Church. As participants shared their reasons for becoming involved, it became apparent that nearly all were spurred by a personal hardship they’d endured — which, in Domiano’s case, was the death of her mother.

"That struck me that we were all looking for the same thing. We learned from our experience and wanted to see if we couldn’t help somebody, based on what we had gone through," Domiano said.

Stephen ministers in Tioga County have assisted countless folks since 1985 by offering emotional support for people in crisis. The ministry was honored Sept. 12 during the annual Blessed Trinity/St. Patrick parishes picnic at St. Margaret Mary, when 18 veteran Stephen ministers were recommissioned and two new ones were commissioned.

This ministry is an international, interdenominational program that trains lay women and men to assist in parish pastoral care. It was begun in 1975 by Dr. Kenneth Haugk, a Lutheran minister and psychologist from St. Louis, Mo., and has expanded to several thousand congregations in more than 100 Christian denominations. St. Margaret Mary was one of the first diocesan churches to offer Stephen Ministry, and it has since spread to the other Blessed Trinity/St. Patrick churches of St. James, Waverly; St. John the Evangelist, Newark Valley; and St. Patrick, Owego.

Domiano said that "we’ve had wonderful leaders" who have helped the Tioga ministry thrive. In fact, Cascarino — who, along with Domiano, is one of two founding members to be active for the full 25 years — noted that more than 100 parishioners have been trained as Stephen ministers.

The parish’s Stephen leaders pair ministers with individuals known as "care receivers," who either come forward or are identified through referrals. The ministers work one-on-one with their care receivers via personal visits and/or phone calls for varying lengths of time. Argetsinger observed that some sort of loss — of a loved one, a marriage, a job or one’s health — often factors into the need for a Stephen minister. Other potential circumstances are loneliness, depression, major life transitions, parenting issues, traumatic experiences and spiritual crises.

Stephen ministers are bound to observe strict confidentiality. This is key in establishing trust because "many times those who are hurting are not comfortable talking about their situation. Maybe they are embarrassed, ashamed or just overwhelmed and don’t know where else to turn," Cascarino said.

The ministers usually do not know their care receivers well, even though they may attend the same church. What’s more important is being able to relate to a situation: "I always felt the best Stephen minister was somebody who had gone through the exact same thing (as the care receiver)," Domiano observed.

Argetsinger said Stephen ministers aren’t professionals — "we’re not the fixers, we’re the listeners" — but noted that they’re trained in detecting when a person needs professional help or emergency care and making appropriate contacts. But in most circumstances, Domiano said a Stephen minister’s value is simply derived from the powerful gesture of "walking with a friend who’s hurting" and being nonjudgmental.

"We always think we have to go through things by ourselves, and I don’t think God wants us to," Argetsinger remarked.

All Stephen ministers have undergone at least 50 hours of intensive training. Cascarino said that training has helped her not only as a minister but in daily situations, "learning so many new ways to effectively listen and ‘be there’ for others."

Stephen Ministry is available at a number of parishes in the Rochester Diocese, although Blessed Trinity/St. Patrick is currently the lone Southern Tier locale. Argetsinger called for more parishes to consider it, since priests and staff members are already stretched thin.

"It has pulled the faithful into realizing that they, too, have a ministry role," said Argetsinger, who has been a Stephen leader both in Blessed Trinity/St. Patrick, where she recently retired after four years as pastoral associate; and her home parish of Immaculate Conception in Ithaca, where a Stephen program existed in the early 2000s. She also noted that she was a care receiver in 2003 due to issues at a previous job.

Stephen ministers devote considerable time and effort, but Argetsinger said the payoff is to share in a healing process, noting that "people who have gotten into it have really felt satisfaction."

You can certainly count Domiano as one of those satisfied ministers.

"I’ve absolutely loved it from day one," she stated.

EDITOR’S NOTE: To contact the Stephen Ministry at Blessed Trinity/St. Patrick, call the parish office at 607-687-1068.