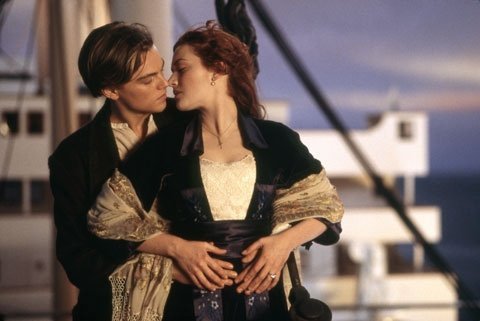 NEW YORK (CNS) — Making a spectacle of the greatest sea disaster of the century is the special effects blockbuster, "Titanic" (Paramount), now rereleased in 3-D.

Those interested in the big finish, however, will have to sit through an improbable love story long after its soggy proceedings have exhausted one’s patience.

The picture begins in 1996 as a scientific expedition explores the sunken remains of the RMS Titanic using, among other things, computer graphics showing how the supposedly unsinkable ship went down.

The expedition’s leader (Bill Paxton) is interested in recovering the ship’s valuables, in particular a priceless diamond known to have been aboard. When he learns its owner survived and is still alive, he has the 101-year-old woman (Gloria Stuart) brought to the expedition’s ship.

She is Rose DeWitt Bukater (Kate Winslet plays young Rose), who in 1912 was a 17-year-old American sailing to New York to wed her wealthy fiance, Cal Hockley (Billy Zane).

Unhappy that her mother is forcing her into this marriage, Rose climbs over the rail and contemplates suicide until saved by a sturdy youth from steerage, Jack Dawson (Leonardo DiCaprio).

Rose is intrigued by penniless Jack’s boundless optimism and artistic talent when he shows her his sketches of nude Paris prostitutes.

Along the way, Rose introduces Jack to some of the famous personalities among the first-class passengers, notably Molly Brown (Kathy Bates), but this serves no greater purpose than providing the dramatic equivalent of name-dropping.

What is far more interesting than any of these characters is the plush background of the sets showing the luxurious trappings of first-class accommodations as well as the cramped, unrelieved drabness of the steerage quarters.

The friendship between the youths blossoms into an affair that begins with Rose posing for one of Jack’s nude sketches, then is consummated in the back seat of an auto in the ship’s hold.

This plays out as bad Edwardian melodrama with snarling villain Cal and his dour, armed retainer (Jack Warner) chasing them in and out of the bowels of the ship.

Writer-director James Cameron tries to win sympathy for the young lovers by portraying them as heroes defying the strict social conventions and moral standards of their time.

But he can’t overcome the soap-opera level in which the egalitarian romance is portrayed, nor the cardboard characters of the lovers.

By the time Cameron gets to staging the sinking of the Titanic, it is indeed done on a spectacular scale, using mammoth sets and hundreds of extras. The confusion and panic of the passengers is amply displayed as the ship flounders, then breaks apart and plunges to the deep.

By focusing on the fate of the callow lovers, however, the movie fails to evoke the human dimension of this tragic loss of more than 1,500 lives in the icy waters of the North Atlantic.

In retelling an epic tragedy, "Titanic" has everything but a sense of humanity.

Because of agonizing death scenes on a massive scale, sexual situations and sporadic rough language and profanity, the Catholic News Service classification is A-III — adults. The Motion Picture Association of America rating is PG-13 — parents strongly cautioned. Some material may be inappropriate for children under 13.

Herx is retired director of the U.S. Conference of Catholic Bishops’ Office for Film and Broadcasting.