To Rome With Love - Catholic Courier 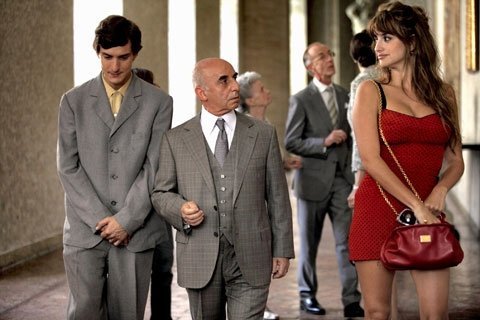 NEW YORK (CNS) — With films set in London, Barcelona and Paris under his belt, quintessential New Yorker Woody Allen extends his European tour in "To Rome With Love" (Sony Classics). His farce follows various couples around the Eternal City as they search for romance, happiness, and — all too frequently — sin.

Writing, directing and acting, Allen spreads himself a bit thin; his 43rd picture feels jumbled and rushed. However, there are flashes of his vintage wit, and Rome, the real star of the movie, has never looked better. Unfortunately, the central theme — guilt-free adultery — taints the proceedings and bars full enjoyment.

"To Rome With Love" features a quartet of stories. The first centers on Hayley (Alison Pill), an American student who, during a summer abroad, falls for handsome lawyer Michelangelo (Flavio Parenti). Their engagement brings Hayley’s parents, Phyllis (Judy Davis) and Jerry (Allen), across the Atlantic for a sit-down with the future in-laws.

Encountering turbulence during the flight over, Jerry is terrified. "I can’t unclench my fists when there’s turbulence," he tells Phyllis. "You know I’m an atheist."

Michelangelo’s father, Giancarlo (Fabio Armiliato), is an undertaker with a special talent: While in the shower, he sings like an opera star. (Armiliato is a famous tenor in real life, and so fits the role perfectly.) Jerry, a retired opera director, sees stars amid the soap bubbles, and schemes to have Giancarlo hit the big time — even if it means carting along a portable shower stall.

The second narrative features a honeymoon couple from the provinces, Milly (Alessandra Mastronardi) and Antonio (Alessandro Tiberi), who decide to relocate to the capital for a fresh start. But circumstances separate them just as they are due to meet Antonio’s relatives and his future employer.

Antonio finds himself with sexy prostitute Anna (Penelope Cruz), and must pass her off as his sweet, innocent wife to save face. Milly, on the other hand, stumbles upon a film set and meets her movie-star idol, Luca Salta (Antonio Albanese). The sleazy leading man seduces her, but not before Anna has her way with Antonio.

In the film’s ever-so-brief flirtation with morality, the saintly Milly admits it’s wrong to break her marriage vows, even with her dream man. She wavers a moment, but quickly decides: What a great story to tell her grandchildren one day!

Then there’s famous American architect John (Alec Baldwin) who returns to Rome 30 years after a youthful sojourn there. He meets an early version of himself in Jack (Jesse Eisenberg), and soon starts coaching the lad in the art of seduction.

Though happy with his girlfriend Sally (Greta Gerwig), Jack is tempted when Sally’s actress friend Monica (Ellen Page) arrives from Hollywood. Sparks fly, and hearts are set to be broken.

-The last — and best — of the plotlines concerns Leopoldo (Roberto Benigni), a perfectly ordinary Roman with a run-of-the-mill family and a humdrum job.

Leopoldo is content with his mundane life — until one day, out of the blue, he’s swarmed by the paparazzi and turned into a media sensation for no apparent reason. Initially bewildered, Leopoldo is seduced by the spotlight and all the temptations that go along with being a "celebrity."

If this all seems confusing, it is; "To Rome With Love" is as tangled as the noodles in a bowl of spaghetti. Some mature viewers, well grounded in their faith, may find it a tasty cinematic dish. But it’s likely to prove too spicy an offering even for most grownups.

The film contains a benign view of adultery and nonmarital sex, much sexual innuendo, as well as some uses of profanity and of rough language. The Catholic News Service classification is L — limited adult audience, films whose problematic content many adults would find troubling. The Motion Picture Association of America rating is R — restricted. Under 17 requires accompanying parent or adult guardian.