'Together Strong: Life Unites' is theme of 2021 March for Life - Catholic Courier 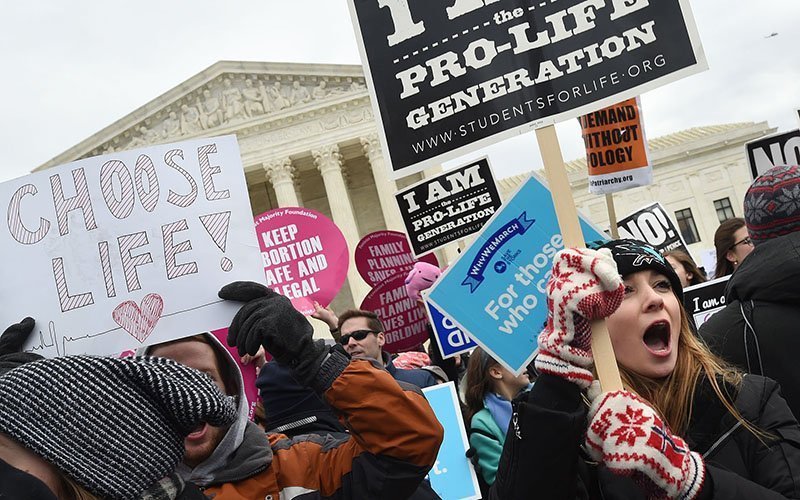 Pro-life advocates gather outside the U.S. Supreme Court Jan. 27, 2017, during the annual March for Life in Washington. (CNS photo by Leslie E. Kossoff)

WASHINGTON (CNS) — The Sept. 10 announcement of the theme for the March for Life — “Together Strong: Life Unites” — made it clear the annual national event, in some form, will proceed next Jan. 29.

But details of how the march, rally and pro-life conference, which together have drawn as many as 100,000 participants in past years, will cope with COVID-19 self-quarantine restrictions in the District of Columbia were not part of the announcement.

Asked on EWTN’s “Pro-Life Weekly” program that evening about whether people should start making plans, Jeanne Mancini, president of the March for Life Education and Defense Fund, said: “You know, everybody has to make that decision on their own. You know, considering their own situations, et cetera.”

She added, “But I certainly would be (making plans), and I obviously will be there this year. I think that standing for life and standing for inherent human dignity of every life from conception to natural death is all the more important this year when there is so much unrest, so much division in our country. We need to show that we are stronger together and that love and life unite us. They make us stronger.”

In July, Mancini had said “we will continue to discern throughout this year what steps should be taken,” regarding pandemic restrictions.

Social distancing and masks aren’t the issue. Washington health authorities require a 14-day self-quarantine for visitors “participating in nonessential travel” from high-risk areas. The quarantine is adjusted every two weeks, and as of Sept. 8, was extended to visitors from 30 states.

That’s a particular obstacle for the many high school and college groups who arrive on long-distance bus rides which have, over the decades, become the pulse of the event.

“If D.C. is still requiring a two-week quarantine for out-of-state travelers, I don’t see a way for us to attend,” said Ed Konieczka, assistant director of university ministry at the University of Mary in Bismarck, North Dakota. “We are taking care of the details that we can, and recognizing which things are out of our control.”

The university typically sends around 200 students and staff members to the march, and in 2018, some 20 students flanked President Donald Trump in the Rose Garden at the White House when he addressed the Mall rally on a video link. This past January, Trump addressed the rally in person, becoming the first president to do so.

The alternative to a Washington trip, Konieczka said, will be a rally that day in Bismarck. “We have been approached by the Diocese of Bismarck with a request to coordinate efforts to have the biggest March for Life event ever at our state capital. We have a shared vision for a large event, where any of our students unable to travel to D.C. will join with members of the diocese.”

Planners of state marches face the same uncertainty. “Right now with COVID and the restrictions, we are playing it by ear in Chicago,” said Denise Zabor, office manager for Illinois Right to Life.

March for Life has taken place in Washington every January since 1974. It’s always held on a date near the anniversary of the Supreme Court’s 1973 rulings, Roe v. Wade and Doe v. Bolton, which legalized abortion on demand.

“I believe it’s the rallying point for all of pro-life America,” said Dave Bereit, the founder of 40 Days for Life, who co-hosted the theme announcement with Mancini.

Among those making remarks during the announcement were Carrie Severino, president of Judicial Crisis Network, and U.S. Rep. Chris Smith, R-New Jersey, who chairs the bipartisan Pro-Life Caucus in the House of Representatives.

“One of the most significant decisions a president has to make is who to put on the federal courts,” Severino said. She warned of the danger of judges “who think it is their job to invent new constitutional rights.”

While Trump recently provided a list of future Supreme Court nominees, Severino observed, Democratic presidential nominee Joe Biden, a Catholic, “won’t tell us who he’ll put on the court” and he supports “using your federal tax dollars to pay for abortions. The choice couldn’t be more clear.”

“(After) the eight years of Obama-Biden, which didn’t even enforce existing laws protecting conscience rights,” Smith said “significant pro-life progress has been achieved” by Trump’s executive orders and his leadership.

The announcement video included a cameo from Vice President Mike Pence, a longtime supporter of the March for Life, who said: “Stand for life. Because life is winning.”

On Sept. 3, the Trump campaign, in a letter to a coalition calling itself “Pro-Life Voices for Trump,” cited how the president has been “transforming the federal judiciary” by appointing federal judges and Supreme Court justices “who would not legislate an abortion agenda from the bench.”

The letter also promised to work for the passage of what’s called the “pain-capable” abortion ban, which has criminal penalties for abortions performed when an unborn child is in at least the 20th week of gestation; supporters of the measure cite scientific research showing a fetus at that stage can feel pain. Passage has been blocked by House Democrats and the threat of a Democratic filibuster in the Senate.

Trump also expressed support for the No Taxpayer Funding for Abortion Act sponsored by Mississippi Republican Sen. Roger Wicker, R-Mississippi, which would codify an end to federal funding for abortion such as that received by Planned Parenthood.

Co-chairing “Pro-Life Voices for Trump” are Marjorie Dannenfelser, chairman of the Susan B. Anthony List, and Christina Bennett, communications director for the Family Institute of Connecticut.

‘We are resolved to end this,” Dannenfelser said about abortion during the March for Life announcement. “That’s why we’re on a verge of a great victory. Life is winning in America, and we’re just moments away … from ending one of the great human rights abuses of our time.”

Editor’s Note: The March for Life website, https://marchforlife.org, provides visitors to the site a way to sign up for updates on the Jan. 29 event.