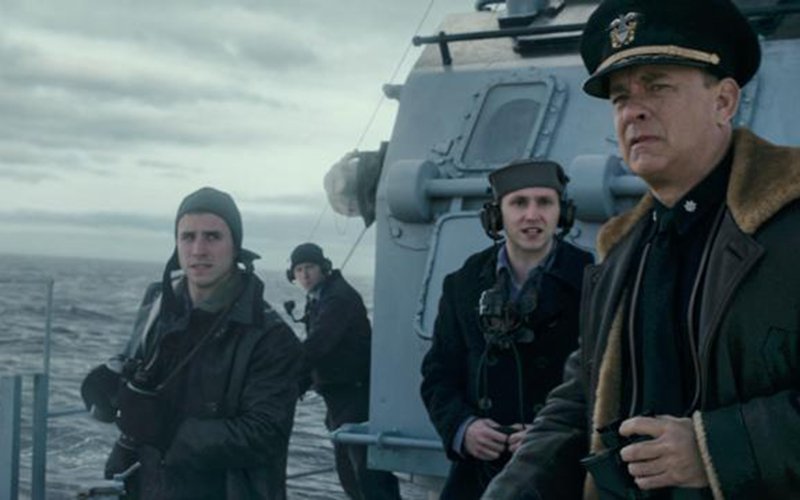 Tom Hanks stars in a scene from the movie "Greyhound." (CNS photos by Sony Pictures)

NEW YORK (CNS) — The novels of British author C.S. Forrester (1899-1966) have proved a rich resource for Hollywood. In 1951, for example, Gregory Peck took the title role in “Captain Horatio Hornblower,” playing the protagonist of Forrester’s popular series of books about the Napoleonic Wars.

That same year, Katharine Hepburn and Humphrey Bogart squared off in John Huston’s “The African Queen.” A decade later, 1960’s “Sink the Bismarck!” lived up to its exclamation point.

Sixty years on, Tom Hanks goes mining in Forrester’s literary legacy and strikes it rich with the taut World War II drama “Greyhound” (Apple+). To call the film, which he both wrote and stars in, a vehicle for Hanks is no putdown since its understatedly courageous, religiously committed Everyman hero, Capt. Ernie Krause, possesses precisely those qualities of character Hanks is so adept at portraying.

Adapted from Forrester’s 1955 work, “The Good Shepherd,” the movie follows Krause on his February 1942 maiden voyage as commander of the USS Keeling, the destroyer from whose codename the picture takes its title. His is one of three such vessels protecting a convoy of troop transports and supply ships crossing the North Atlantic to the U.K.

The action centers on the period of five days during which the convoy must pass through an area of the ocean beyond the reach of Allied air support. This exposes it to the marauding of a wolfpack of German U boats.

Krause’s Christian faith is prominent in Hanks’ script. In fact, the first scene in which he features finds him praying on his knees.

Krause has a particular fondness for the verse from the Letter to the Hebrews which proclaims that “Jesus Christ is the same yesterday, today and forever.” In the brief flashback to December 1941 that constitutes the film’s minimal but effective romantic interlude, Krause gives a Christmas ornament with those words inscribed on it to his girlfriend, Evelyn (Elizabeth Shue).

Krause’s beliefs provide him with the firm foundation and far-reaching perspective he’ll need as, with the aid of his executive officer, Charlie Cole (Stephen Graham), he battles enemy submarines and maneuvers through heavy seas. Under the pressure of apparently overwhelming challenges, his humane values and ability to endure endless hours at the helm come to the fore.

Shelly Johnson’s atmospheric cinematography captures the intimidating vastness of the wintry waters and contributes to the success of director Aaron Schneider’s engrossing tale.

As might be expected, Krause’s vocabulary does not include the kind of words proverbially associated with sailors. In fact, when another character drops the dialogue’s lone F-bomb, it goes off with an unusually percussive effect.

Given this restraint, which is matched by Schneider’s generally discreet depiction of mayhem, many parents may consider “Greyhound” suitable for older teens. All the more so since this portrayal of the Battle of the Atlantic, rooted as it is in real events, provides viewers with an educational retrospective as well as a rousing adventure.

The film contains much stylized combat violence with minimal gore, a couple of mild oaths and one rough term. The Catholic News Service classification is A-III — adults. The Motion Picture Association rating is PG-13 — parents strongly cautioned. Some material may be inappropriate for children under 13.