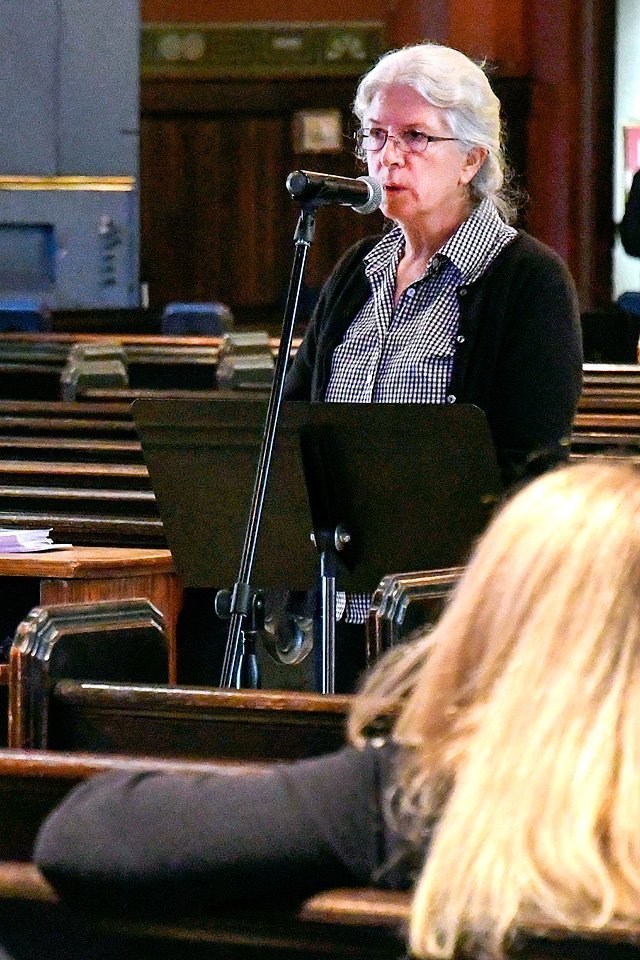 Peace and social-justice awareness efforts have thrived as of late in Tompkins County, thanks to a variety of initiatives involving local Catholics.

In fact, all of the county’s Catholic faith communities — as well as Catholic Charities of Tompkins/Tioga — banded together for the annual Tompkins County Peace Week that took place in mid-October. Highlighting this year’s series of events was the appearance of Martha Hennessy, an outspoken peace activist who is the granddaughter of famed Catholic Worker cofounder Dorothy Day. Hennessy spoke at Cornell University following the 10:30 a.m. Mass on Oct. 16, then later that day offered a reflection at an evening prayer service at All Saints Church in Lansing.

Other Peace Week activities included the showing of a documentary on Malala Yousafzai, the youngest-ever recipient of the Nobel Peace Prize, on Oct. 17 at Ithaca’s St. Catherine of Siena Church; and Catholic-Muslim dialogue that took place Oct. 20 at Ithaca’s Immaculate Conception Church, with members of the local Islamic community making a presentation and taking part in questions and discussion.

One month earlier, St. Catherine of Siena staged an International Peace Festival Sept. 16-18 with a weekend full of entertainment, family-friendly activities, international food and Masses for peace. The festival is held annually in conjunction with the United Nations International Day of Peace Sept. 21. In addition to strengthening local community ties, the event raises funds for organizations that promote peace locally and around the world.

St. Catherine of Siena also was on the steering committee for the annual Ithaca MobilePack, which took place Sept. 22-24 at Ithaca’s First Congregational Church. Groups and individuals from various denominations, and of all ages, worked together to pack food for distribution overseas via Feed My Starving Children, a nonprofit Christian organization. In all, approximately 1,200 volunteers packed a total of 300,000 meals this year. According to Ann Marie Eckert, pastoral associate at St. Catherine, that parish will host the MobilePack event in 2017 and 2018.

Other recent local efforts of note have included:

* 40 Days for Life in Ithaca, which began Sept. 28 and will conclude Nov. 6, involves peaceful prayer daily from 7 a.m. to 7 p.m. across the street from Ithaca Planned Parenthood at 620 W. Seneca St. Residents of Ithaca and nearby communities are taking part in this initiative, which is part of an international effort to end abortion. A 40 Days for Life campaign also is held each spring at the same Ithaca location. To help kick off the current 40 Days for Life, Carol Crossed — a nationally recognized pro-life activist from Rochester — spoke on "The Year of Mercy: Protecting the Vulnerable Without Exception" Sept. 20 at St. Catherine of Siena.

* Area parishes took part Sept. 15 in the Stephen E. Garner Day of Caring, which kicked off the United Way of Tompkins County annual campaign and involved the collection of nonperishable food and personal care items that will be distributed to food pantries, schools and nonprofit agencies around the county.

* The youth group from All Saints Parish sponsored a presentation on the "Present Flight of Refugees," given by Professor Chris Barrett, an economics and agricultural professor at Cornell University, and Laurie Konwinski, justice-and-peace director at Catholic Charities of Tompkins/Tioga. That event took place Oct. 30 at the Lansing church.

* Dr. Gerry Gacioch, a Catholic climate ambassador in the Diocese of Rochester, lectured Oct. 6 at St. Catherine of Siena on Pope Francis’ encyclical Laudato Sí that was released in 2015. Gacioch has been trained by the United States Conference of Catholic Bishops’ Catholic Coalition on Climate Change to lecture about Catholic teaching on care for creation.

* An annual fundraising event for Catholic Charities was held Sept. 30 at St. Catherine of Siena.