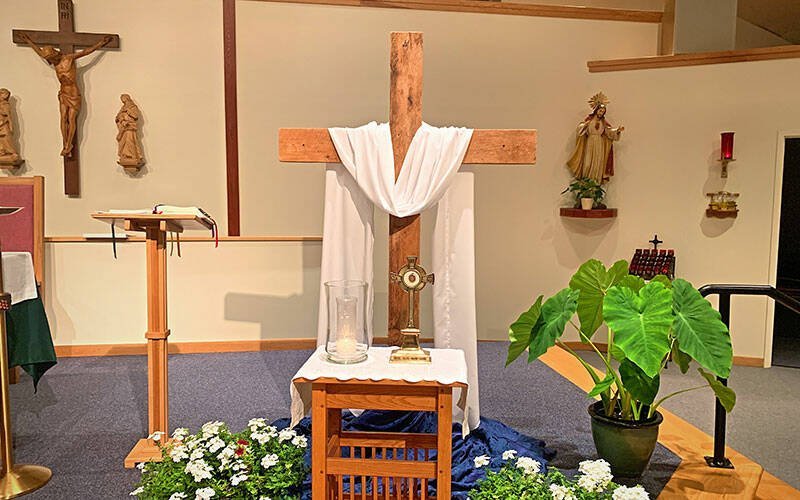 A Tompkins County parish recently lived up to its name quite nicely, thanks to a series of events that took place in mid-September.

At Holy Cross Church in Dryden, the feast of the Exaltation of the Holy Cross — which is celebrated annually on Sept. 14 — was extended over several days. Among the featured activities:

• Veneration of a relic of the Holy Cross occurred during the regularly scheduled 8:30 a.m. Sunday Mass on Sept. 12. In addition, the liturgy began and ended with cross-themed hymns: “Lift High the Cross” and “Take Up Your Cross,” respectively.

• On the actual feast day, a special Mass was celebrated by Father Jorge Ramirez. The Tuesday-evening liturgy was preceded by confessions and 1,000 Thank You Jesuses — recitation of the words “Thank You Jesus” 1,000 times while counting along on rosary beads — in thanksgiving for the sacrifice of Christ’s death on the cross.

• To close out the week, a dish-to-pass supper took place at the church on Sept. 17.

The series of events was initiated by Father Ramirez, who is the first-year parochial administrator of Holy Cross Parish. He told the Catholic Courier that he was pleased with the overall participation level, saying that approximately 40 people were in attendance on Sept. 14 — which he considered a healthy turnout, since it was a weeknight.

“We had a line for confessions, which is good. I like that,” Father Ramirez remarked with a laugh.

The feast of the Exaltation of the Holy Cross acknowledges the actions of St. Helena, who, according to tradition, during a fourth-century pilgrimage t0 Jerusalem discovered the cross on which Jesus was crucified. The feast day also recognizes construction of the Church of the Holy Sepulchre by the Roman Emperor Constantine the Great, Helena’s son, on the sites of Jesus’ crucifixion and burial.

In addition, the feast notes recovery of the cross by the Byzantine Emperor Heraclius and its return to Jerusalem during the seventh century after it had fallen into the hands of the Persians. Beginning in that century, the feast of the Exaltation of the Holy Cross has been observed annually in the Catholic Church with a feast day of Sept. 14.

Along with the recent activities at Holy Cross Church, Father Ramirez noted that plans are in the works for special events on the feast days of the other two northeast Tompkins County parishes that he oversees: All Saints in Lansing, which will observe the Solemnity of All Saints on Nov. 1; and St. Anthony in Groton, whose patronal feast day falls annually on June 13.

Father Ramirez explained that he’s focusing upon the parishes’ feast days as a means of sharing faith and building community through a combination of liturgical celebrations and social events.

“Sometimes people don’t see each other until the following Sunday. We are a family, and we want to share different moments,” said Father Ramirez, a native of Colombia who was ordained a priest of the Diocese of Rochester in 2016.

Holy Cross, All Saints and St. Anthony have operated as a cluster since 2005, sharing the same pastoral leader but remaining independent parishes. The three churches are commonly known as the North East Tompkins Roman Catholic Parishes, or N.E.T. Catholic. Father Ramirez explained that he views the trio of parishes as having their own local families while also existing as a larger combined family, with participation and collaboration from all the parishes guiding various events and ministries.

“Everybody is welcome,” he said.

Tags: Feast Days & Saints
Copyright © 2022 Catholic Courier, Inc. All rights reserved. Linking is encouraged, but republishing or redistributing, including by framing or similar means, without the publisher's prior written permission is prohibited.