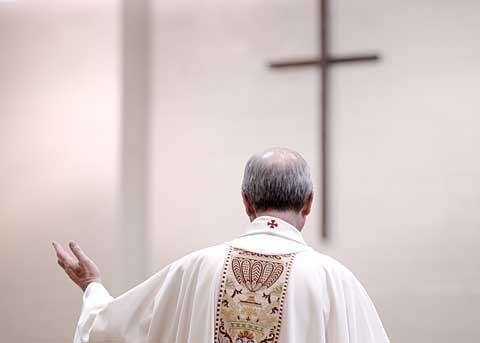 A priest gives a homily at McQuaid Jesuit High School in 2004.

The Preaching Institute at St. Bernard’s School of Theology and Ministry in Pittsford recently launched a new initiative designed to help authorized preachers in the diocese become more adept at giving homilies.

The new Preaching Assessment Project hopefully will serve as a tool to help preachers build on their existing skills, said Father George Heyman, St. Bernard’s director of continuing education. It’s intended to help preachers better communicate with the people in the pews and draw stronger connections between their homilies and the rest of the liturgy, he said.

"We took several months to devise a tool for our purpose," Father Heyman said of the Preaching Assessment Project. "We’ve never done anything quite like this in our diocese. It is a new adventure and a new thing we’re trying."

There are several components to the process, which includes assessments by preaching experts, peers and parishioners. The process starts off with an initial meeting between Father Heyman and a participating preacher. They’ll choose a weekend, usually one during which the participant will be preaching at more than one liturgy, and Father Heyman will describe the assessment process and tell the preacher what the assessment team will be looking for.

This initial meeting and disclosure is one reason this process is more of an assessment than an evaluation, Father Heyman said, stressing the distinction between the two.

"One who’s evaluated just waits for the outcome of a jury. We’re not designed to evaluate your preaching, to give you an A or B or C," he said. Instead, "You as the person being assessed … are already part of the process before the assessment begins. There should be no surprises in an assessment process."

On the agreed-upon weekend, the preacher will be critiqued by three separate teams of assessors. Two "preaching experts" who are part of the Preaching Institute’s advisory committee will listen to all of the homilies that weekend, Father Heyman said. This pair will assess the theological and liturgical aspects of the homilies and see how well they fit in with the rest of the liturgies.

"The experts have the most elaborate check-off list," he said. "The second group of assessors are the peers."

These are people the preacher selects ahead of time, and they share leadership or ministerial responsibility in the faith community, such as business managers or pastoral associates, Father Heyman said. Since these people usually are very familiar with the preacher, they’ll assess his personal qualities and the way the preacher comes across to those in the pews.

Ten or 12 parishioners, also selected by the preacher ahead of time, make up the third group of assessors. They’re given a very simple form before Mass and asked to listen closely to the homily, then complete the questions, Father Heyman said.

"Does the preacher make eye contact?" he asked, citing a sample question. "Did the homily work with the Scriptures? Can we summarize the homily in one line? Was it interesting? Was I challenged to understand the Good News of the Gospel in a way that I wasn’t able to prior to Mass today?"

These DVDs are helpful because they help the preacher see his actions and homilies the way parishioners see them, he said. The assessments also help preachers realize how parishioners receive their homilies. One preacher, for example, walked around the church as he spoke and thought his actions helped him connect to parishioners throughout the church. When he received the assessment results, however, he learned his travels frustrated some parishioners, who felt he was wandering away from them and thus felt their own attentions begin to drift.

Preachers are not required to participate in the Preaching Assessment Project. A $200 fee will be billed to the preachers’ faith communities to help cover the project’s costs.

EDITOR’S NOTE: For more information or to apply to participate in the Preaching Assessment Project, contact Father George Heyman at 585-271-3657, ext. 292, or e-mail him at gheyman@stbernards.edu.