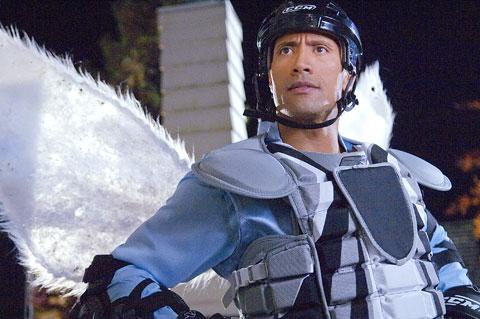 Dwayne Johnson stars in a scene from the movie "Tooth Fairy." (CNS photo by Fox)

NEW YORK (CNS) — Though it features scenes of former pro wrestler Dwayne “The Rock” Johnson sporting a pair of more-or-less gossamer wings, “Tooth Fairy” (Fox), a feeble fable about the importance of childhood imagination and the pursuit of dreams, never really takes flight.

Additionally, this mostly family-friendly comedy from director Michael Lembeck includes elements of violent sports action and mature dialogue that preclude endorsement for all.

Johnson plays Derek Thompson, a once-gifted professional hockey player now reduced to body-checking opponents for the enjoyment of sadistic minor league fans. Thanks to the dental damage that often results, Derek has earned the ironic nickname “The Tooth Fairy.”

Derek’s comedown in the world has left him disillusioned, leading him to discourage a youthful hockey enthusiast from dreaming of glory on the ice and to all but deny — in the presence of girlfriend Carly’s (Ashley Judd) impressionable 5-year-old daughter, Tess (Destiny Grace Whitlock) — the very existence of the “real” tooth fairy.

For these offenses, Derek is supernaturally summoned to appear before Lily (Julie Andrews), the matriarch of Fairyland, and sentenced to two weeks of service as a collector of baby teeth. Though an initial mix-up sees him clothed in a tutu, Derek is eventually given a marginally more masculine outfit and assigned to the care of an officious but good-hearted pixie mentor named Tracy (Stephen Merchant).

His new secret mission not only complicates Derek’s relationship with Carly, but endangers his macho standing among his teammates, including newcomer and rival Mick Donnelly, played by skateboarding star Ryan Sheckler.

Along with the scenes of bruising rink-top mayhem, the script — penned by no fewer than five screenwriters (Lowell Ganz, Babaloo Mandel, Joshua Sternin, Jeffrey Ventimilia and Randi Mayem Singer) — incongruously mixes in an exchange between Derek and Carly’s 14-year-old son, Randy (Chase Ellison), about the physical effects of puberty.

Though brief, vaguely worded and played for laughs — Derek’s impression that Randy is looking for guidance is quickly disproved by the teen’s evident discomfort with the topic — the discussion seems especially out of place in a tale supposedly dedicated to celebrating the innocence and wonder of little ones like Tess, and presumably aimed, in part at least, at an audience of her peers.

The film contains moderate hockey violence, some mild sexual references and brief scatological humor. The USCCB Office for Film & Broadcasting classification is A-II — adults and adolescents. The Motion Picture Association of America rating is PG — parental guidance suggested. Some material may not be suitable for children.