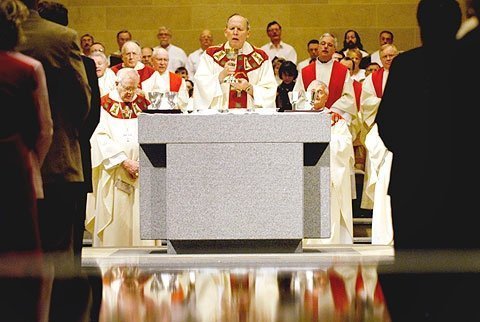 Here are some of the top news stories of Bishop Matthew H. Clark’s 33 years as Bishop of Rochester.

Bishop Clark created the annual campaign, now known as the Catholic Ministries Appeal, as an alternative to a tax on parish revenues. The appeal now raises more than $5 million annually in support of catechetical training, youth and migrant ministry, pastoral planning, Catholic education and Catholic Charities. In 2003-04, the appeal was folded into the Partners in Faith capital campaign, which raised nearly $56 million, a portion of which was returned to parishes. Diocesan proceeds went to a priests’ pension fund, Catholic-school endowments, Catholic Charities, faith formation, cathedral renovations and construction of St. Bernard’s new facility.

Bishop Clark has ordained all 112 active and 26 retired permanent deacons in the Diocese of Rochester, except for two who moved to the diocese after ordination.

In 1981, Bishop Clark convened a Task Force on Women in the Church to help him prepare to write a pastoral letter encouraging women’s participation in the church and calling for their inclusion in liturgical roles that are open to them. He also helped draft a pastoral letter on women that was considered — but not approved — by the U.S. bishops.

Advocates for peace — 1983 and thereafter

Bishop Clark called for the U.S. bishops’ 1983 pastoral letter “The Challenge of Peace” to advocate an immediate, negotiated halt to the development of new nuclear weapons. Locally, the bishop spoke at a peace rally near the Seneca Army Depot on Oct. 22, 1983, and in December of 1999 condemned the bombing of Iraq.

A March 12, 1986, letter from Bishop Clark asked the Vatican Congregation for the Doctrine of the Faith to reach a compromise that would allow diocesan priest Father Charles E. Curran to remain a Catholic theologian. The CDF had investigated the writings of Father Curran, then a professor at The Catholic University of America, for dissent from church teachings related to sexual ethics. Bishop Clark later accepted the CDF’s decision to revoke Father Curran’s faculties to teach theology at CUA, but said he remained a priest in good standing in the Diocese of Rochester.

Likewise, responding to the declining availability of priests for parish service, in 1997 the bishop called neighboring parishes to work together in a process called Pastoral Planning for the New Millennium, through which they shared resources and re-examined their liturgical schedules and ministries. The process led to clustering and later consolidation of numerous parishes. For his promotion of parish-level decision-making, the bishop received the Lumen Gentium Award from the Conference for Pastoral Planning and Council Development in April 2011.

Forges bonds with other faiths — 1988 and thereafter

In 1988, Bishop Clark signed a special covenant with then-Episcopal Bishop of Rochester William Burrill. On May 8, 1996, he signed an agreement of friendship and dialogue among the Rochester Board of Rabbis, the Jewish Community Federation of Rochester and the Diocese of Rochester. The document, now known as the Rochester Agreement, has led to many Catholic-Jewish initiatives — including interfaith pilgrimages he led to Israel in 1998 and Rome in 2005 — and became a model for similar agreements in other dioceses. A similar effort between Catholics and Muslims culminated in the 2003 Agreement of Understanding and Cooperation between the Diocese of Rochester and the Council of Masajid of Rochester. In 2011, Bishop Clark received a lifetime achievement award from the ecumenical group the Greater Rochester Community of Churches.

In a 12-page pastoral instruction released in March 1988, the bishop addressed the pastoral care of people with HIV/AIDS, noting that although some Catholics then believed HIV/AIDS was a punishment from God, Jesus had often spoken against the idea that suffering was a result of sin. On March 1, 1997, he presided at a Mass for gay and lesbian Catholics and their families. In October 1997, he answered questions from the CDF about the Mass and his handling of a subsequent Solidarity Sunday.

By the time Bishop Clark closed the diocesan synod on Oct. 3, 1993, the grassroots process had identified five goals — lifelong faith formation, Catholic moral education, small Christian communities, the consistent-life ethic and the role of women in the church and society — which were incorporated into a five-year pastoral plan for the diocese.

In 1993, Bishop Clark instituted a policy on how diocesan employees and volunteers should respond to allegations of sexual abuse of minors; in 1996 he expanded the policy to cover all sexual misconduct. Today those who work with children, teens and vulnerable adults must undergo background checks and all employees and volunteers are trained to detect and prevent abuse. In May 2002, the diocese strengthened its reporting requirements, and the bishop removed from public ministry six priests who had been “credibly” accused of sexual abuse of minors. The diocese also added more lay professionals to a panel that evaluates abuse allegations. In June of 2012, Bishop Clark published the names and dispositions of 23 diocesan priests removed from ministry since 2002 following credible allegations of abuse.

Spearheads youth/young-adult ministry — 1993 and after

Bishop Clark’s enthusiastic participation in various local and national youth events has sparked significant growth in youth ministry throughout the diocese. During World Youth Day in Denver in 1993, he slept under the stars one night with the diocesan contingent. He also has championed young-adult ministry, and in November 2010 the Catholic Campus Ministry Association named him Exemplary Bishop of the Year. He also served as the U.S. bishops’ episcopal liaison to the National Federation for Catholic Youth Ministry.

The $11-million renovation and addition to the cathedral included a new altar and full-immersion baptismal font; new spaces for gatherings, meetings and administration; new eucharistic and reconciliation chapels; more parking; and small outdoor parks with outdoor shrines. The Halloran-All Saints pipe organ was installed in 2008, and the renovation won an international design award and recognition in the religious architecture journal Faith & Form.

Bishop Clark has long been a champion of lay leadership since appointing the diocese’s first pastoral administrator in 1994. He wrote about the diocese’s experience with lay ecclesial leaders in his 2009 book Forward in Hope: Saying Amen to Lay Ecclesial Ministry.