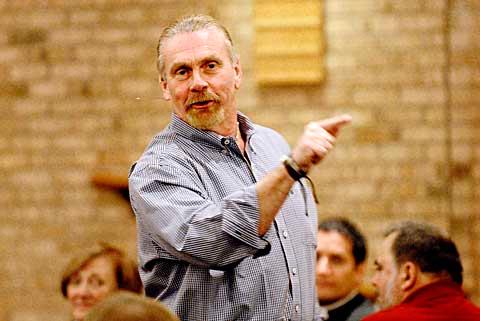 Dan Davis, a motivational speaker on drug and alcohol abuse prevention, speaks to parents and teens at Church of the Assumption in Fairport Sept. 30.

If your teenager ends up at the police station for an alcohol-related offense, Dan Davis has some advice: Resist your instinct to quickly post bail. Greater long-term good can be achieved by letting your kid spend a night behind bars.

Davis, a self-described "reality therapist," appeared Sept. 30 at Fairport’s Church of the Assumption for a 90-minute presentation to nearly 100 adults and adolescents. The event, sponsored by the parish’s youth and health ministries, also featured literature and representatives from local agencies on drug and alcohol awareness/prevention.

Moving constantly around the church, speaking rapidly and shouting at times, Davis emphasized that tough love is the best way for parents to keep their children from developing addictive patterns. To punch home his points, he offered blunt assessments of his own descent into alcohol and cocaine addiction and subsequent recovery.

Davis said he took his first drink at age 14 and, as a gifted football player, continuously avoided arrest despite drunken-driving accidents throughout high school and college. He noted that his father always bailed him out and police looked the other way since he was a sports hero — even after he ran a red light and caused several injuries in a car carrying two babies and their parents.

However, "When you let a 16-year-old off, you know what you’re telling him? He could do it every time," Davis said. "If I can give you anything tonight, hold (your children) accountable."

As a young adult Davis was thrown off a car’s hood while drunk. This resulted in a head injury that ended his athletic career and nearly killed him. But the drinking continued, and even after he became a teacher he would often arrive at school intoxicated. He also began abusing cocaine, eventually losing his job.

It wasn’t until his parents padlocked their house — fearing for their own lives because Davis was so out of control from drugs — that the cycle of enabling their son finally ceased.

Davis, who is Catholic, has emerged as a highly sought-after public speaker, having shared his message with more than 2 million people nationwide. Though he has remained clean for nearly a quarter-century, Davis — who declines to reveal his age — discovered 10 years ago that he had contracted hepatitis C. The resident of Potsdam, in upstate New York, said he has lost the use of more than half of his liver. He believes that his illness stems from too many years of substance abuse, saying that "what you put in your system, it’s going to get you. It’s just a matter of time."

Among Davis’ other words of wisdom: