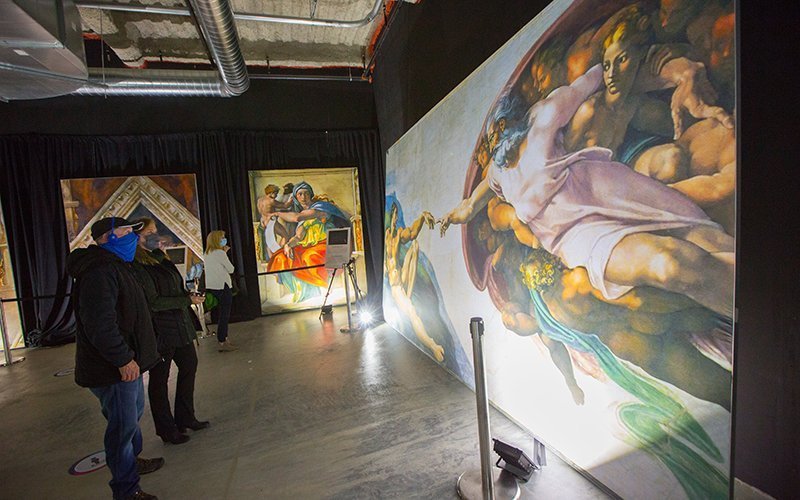 Dave and Jackie Krenske of Divine Mercy Parish in Faribault, Minn., view a reproduction of a fresco called "The Creation of Adam" Nov. 15, 2020, at Michelangelo's Sistine Chapel Exhibition at the Mall of America in Bloomington, Minn. (CNS photo by Dave Hrbacek/The Catholic Spirit)

BLOOMINGTON, Minn. (CNS) — The internationally acclaimed Michelangelo’s Sistine Chapel Exhibition with its 34 life-size reproductions is designed to give visitors a closer look at the frescoes that adorn the ceiling of the chapel at the Vatican than if they visited in person.

The exhibit opened to the general public Nov. 13 at the Mall of America in the Twin Cities’ suburb of Bloomington.

It includes all of Michelangelo’s works displayed on the ceiling of the Sistine Chapel, from his famous fresco, “The Creation of Adam,” all the way to the “Last Judgment,” which was completed in 1541 as part of an altar wall redesign.

The exhibit, consisting of images put on large panels up to 41 feet by 41 feet, has been traveling over the past five years to cities across the U.S. and countries around the world, including Canada, where it premiered in July 2015, China, Poland, Germany, Austria, Panama and Colombia.

It will remain at the Mall of America through at least Jan. 31, possibly longer depending on demand.

“I’ve always wanted to see the Sistine Chapel, but knew we probably wouldn’t get there,” said Jackie Krenske of Divine Mercy Catholic Parish in Faribault, Minnesota, who visited the Mall of America Nov. 15 with her husband, Dave. “So, we just thought this would be a real good way of being able to see it. It’s great.”

SEE Global Entertainment in Los Angeles produced the exhibit. SEE’s CEO, Martin Biallas, visited the Mall of America to see the exhibit there.

“What excites me the most is that we reach not only Catholic people, we also reach all people of faith,” Biallas, who is Lutheran, told The Catholic Spirit, newspaper of the Archdiocese of St. Paul and Minneapolis. “Of course, it’s a religious theme, but it (also) reaches the art fans, the history fans (and) all the different faiths.”

Another exhibition is open in St. Louis, and one is opening in Phoenix Nov. 20, with future stops planned in Chicago, Philadelphia, Atlanta, Albuquerque, New Mexico, Tampa, Florida, and Grand Rapids, Michigan, in 2021. The exhibit generally stays at one location for two to three months, Biallas said. So far, he said, the response has been strong.

The exhibit follows coronavirus safety protocols for in-person events established by the Centers for Disease Control and Prevention, the Minnesota Department of Health and the Mall of America. Guests will be asked to follow social-distancing requirements, and a maximum of 85 people will be allowed in the exhibition at one time.

“We are thrilled to bring this exhibit to Mall of America for guests to enjoy a safe and immersive exhibit experience,” said Jill Renslow, executive vice president of Mall of America. “This exhibit will provide a unique, cultural opportunity for Mall of America visitors of all ages throughout the holiday season.”

The cost to visit the exhibit is $19 for adults; $14 for seniors, members of the military and college students; and free for children 6 and under. Visitors can buy tickets in advance or at the door.

Editor’s Note: More information about the Michelangelo’s Sistine Chapel Exhibition can be found online at https://chapelsistine.com.

Hrbacek is a staff writer for The Catholic Spirit, newspaper of the Archdiocese of St. Paul and Minneapolis.